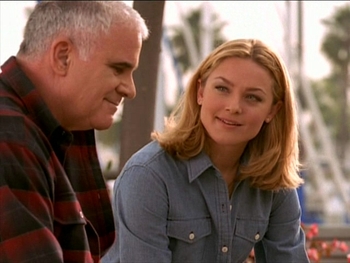 In a flashback to Galway, Ireland, 1753, Angel—at that point, still known as "Liam"—is fighting with his father. Enraged by his son's chronic fecklessness and current mocking demeanor, Liam's father slaps his son in the face, shouting that he'll always be a layabout and a scoundrel. In the present, Angel is fighting a demon that is dressed like a homeless person on the train tracks in a L.A. subway tunnel. As Detective Kate Lockley arrives on the scene, the demon clutches its chest, sinks to the ground and expires. Forced again to deal with L.A.'s dark side and Angel's place in it, Kate ironically wonders whether she should call the coroner or Hazardous Materials, while Angel tries to convince her not to report the supernatural aspects of this case. Later, as an officer interviews the Blue Circle courier who pulled the emergency cord after allegedly being attacked by "your average Joe-stink homeless guy," Angel's instincts are immediately aroused when he spots Kate's dad, retired police detective Trevor Lockley, take a package from the crime scene.

At Angel Investigations, Angel identifies the demon in one of Wesley's reference books as a Kwaini Demon, an inherently non-violent race. Angel visits Kate at the precinct, but as he explains that something must have set off the Kwaini demon in the subway, Kate interrupts, preferring that he say "evil thing" instead of "demon." He is unable to convince Kate that the demon she saw dead in the subway is not an evil evil thing. Kate is reluctant to admit that his news means that this case is not as routine as they initially believed. The AI team splits up to pursue their two leads. Angel follows the Blue Circle courier to an apartment building, where Trevor Lockley opens the door to the courier's knock and shoves a brown-wrapped package into the man's hands. Once the courier leaves, Angel confronts Trevor about the exchange, theorizing Trevor was returning the parcel he removed from the crime scene that morning. Intending to discover who Trevor is working for, Angel gives Kate's father a chance to come clean so they can take care of the problem without further police involvement. Taking umbrage at Angel's angry implication that he cares nothing for his daughter, Trevor tells Angel that he can't possibly interpret a father's actions, and slams the door in his face.

Trevor Lockley invites his daughter to lunch. He asks her questions about Angel. She tells him that Angel is a private investigator and a good one.

After locating the Kwaini's body in the subway tunnel, Wesley performs an autopsy which reveals the demon was on drugs, and attacked the train because someone on board had more of the drug. The drug not only made the normally peaceful Kwaini demon violent, but also enhanced its strength. Angel is concerned that the same drug might also enhance the strength of an already-powerful battle demon. Cordelia, who has been tailing the Blue Circle delivery driver, comes through the door. She has photographs that show the building from where the drug is coming, a business called Kel's Exotic Auto.

Trevor reports on Angel to the drug dealers. He does not know that Kel's Exotic Auto is in the drug business, believing he is helping them to transport auto parts that have been illegally imported into the United States so as to avoid import duties. He resents being asked to remove objects from a crime scene and to pump his daughter for information, which he had never agreed to do, and advises his employers to "dial back" for a while. After he's gone, the demonic head of the drug operation orders his lackeys to kill Angel and Trevor.

In Galway, Liam tearfully bids goodbye to his mother and younger sister,and exchanges more harsh words with his father. Making his way back to the pub, Liam spends the remainder of the day carousing wildly. An elegantly dressed Darla watches in fascination as a very drunk Liam brawls with beautiful abandon, besting several men in quick succession. That night, luring the vulnerable young man into a dark alley with promises of exotic experiences and places, Darla sires Liam, first biting him, then drawing her own blood for him to drink in turn. That night, Angelus rises from his grave and is greeted by Darla. She watches as he morphs and kills his first human, after which he visits Liam's home and kills his family.

Two men in suits visit Trevor Lockley to make sure he hasn't said anything to his daughter. Angel arrives to warm Trevor of the danger in which he's involved, as the men in suits reveal themselves as vampires. Angel is unable to persuade Trevor to invite him inside in time, and is forced to watch helplessly as one of the vampires kills the old man. As soon as Trevor is dead the barrier lifts and Angel leaps into a fight with the two vampires, staking one but Trevor's killer gets away as Kate arrives to find her father dead. Devastated, Kate orders Angel to leave. Angel returns to the office and heavily arms himself for battle, this mission having now become personal.

Kate finds the money her father had been paid and the details for Kel's Exotic Auto. She turns up at the demon drug lord's base and stakes the vampire who killed her father. Angel shows up and helps her fight and kill the remaining vampires and finally chops off the head of the demon. Kate walks away, saying that Angel doesn't know anything about being human.

Back in Angel's past, Darla finds that Angelus has killed all of Liam's family. Although Angelus believes he had the ultimate victory over his father, Darla disagrees; Angelus went straight for the kill and didn't make his father suffer or respect him, telling her new love that he still has a lot to learn. Kate visits her father's grave while Angel watches from the safety of the shadows.