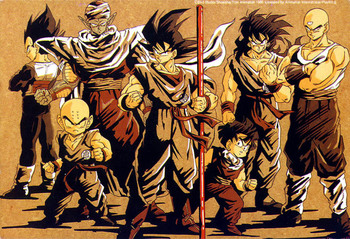 A group of Earth's mightiest warriors. Formed as a team during the Saiyan invasion, they gradually gathered beforehand over time, and have always fought many battles in order to test their skills and reach other goals, and in turn have become the unofficial defenders of Earth.
Master Roshi 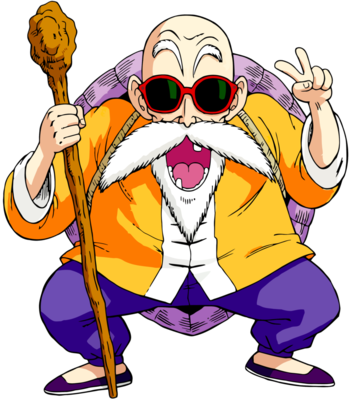 Voiced by (Japanese): Kouhei Miyauchi (Dragon Ball and Z), Joji Yanami (DB episode 137 only), Hiroshi Masuoka (Z and GT), Masaharu Sato (Movie 13, Kai, Battle of Gods, Resurrection 'F', Super), Kinya Aikawa (The Path to Power), Takkou Ishimori (Dragon Ball: Advanced Adventure)
Voiced by (English): Clifton Wells (Harmony Gold); Michael Donovan, Ian James Corlett, Peter Kelamis, Don Brown, Terry Klassen (BLT/Ocean); Mike McFarland (Funimation); Dean Galloway (Blue Water); Ed Marcus (AB Groupe/"Big Green"); Nesty Ramirez (Creative Products Corp., Philippines); Dave Bridges (Animax); Kirk Thornton (Bang Zoom!/Toonami Asia in Super)
Voiced by (Latin American Spanish): Jesús Colín (DB, Z and GT), Jorge Roig (Kai), Miguel Ángel Sanromán (Battle of Gods, Resurrection ‘F’, Kai the Final Chapters and Super)
Voiced by (Italian): Mario Scarabelli
"Goku... Krillin... You're the ones who showed this old fossil he still had something left to give. That it was too soon to let the limits of age sentenced him to sit idly by on the sidelines. You boys who were never content to stop, who kept aiming for and climbing greater and greater heights want me to take it easy? Now listen to me boys! Always remember these words: Work hard! Study well! and eat and sleep plenty. That is the Turtle Hermit way! We must master the art of peace in addition to the art of war! The Turtle Hermit School will be with you... always! This will be my greatest, most powerful Kamehameha!"

Goku's first mentor. A hermit whose home is located on a small island in the middle of the ocean. Very strong (at least at the start of the series) and with a keen eye. Also very perverted and usually hits on any pretty tail that comes his way. 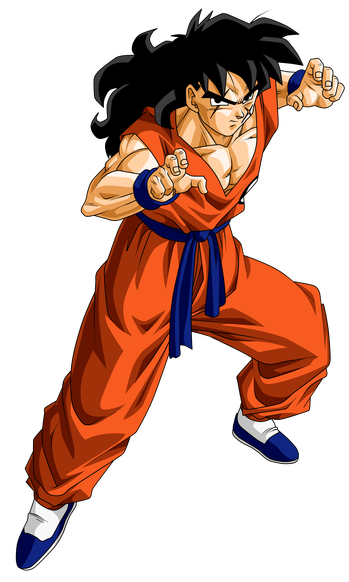 Yamcha was a desert bandit, Bulma's first love, and Goku's first rival. Even in the original series, Yamcha was often used as the primary victim of The Worf Effect, hardly winning any important fights despite being one of the most powerful protagonists. By Z he was pretty much a target to show how tough the villains were, so much so that around the Buu Saga he gave up fighting entirely (except for fillers in which he somehow defeated enemies even Goku had trouble with a few years before).

Yamcha was the series' originator for a lot of the tropes and quirks that would later be popularized by characters like Krillin, Tenshinhan, Piccolo, and Vegeta. The Arrogant Kung-Fu Guy, rival-turned-friend, Butt-Monkey, Mr. Exposition, and "bad boy" roles these characters fulfill all started with him. Even Gohan and Future Trunks draw from him; they both inherited his shy awkwardness, sword fighting, and long-haired character designs. 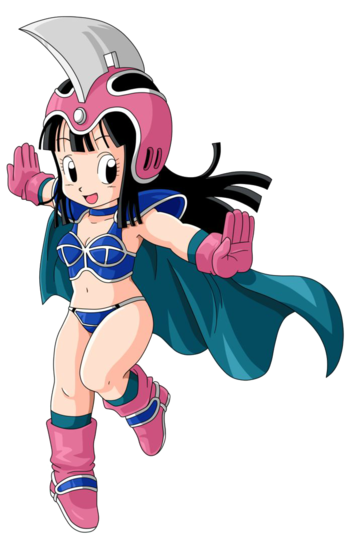 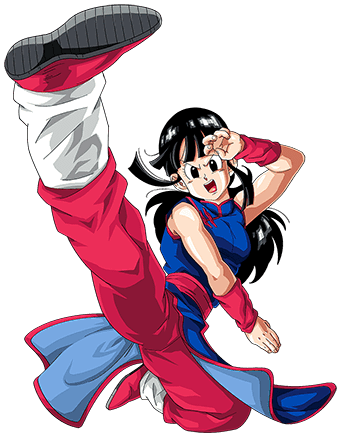 The daughter of the Ox-King. Chi-Chi is Goku's first and only love (though he didn't realize it when they first met). At the start Chi-Chi was rather panicky, attacking anything threatening with extreme force (she beheaded a T-Rex with only the blade on her helmet), though eventually grew out of this to become a rather firm fighter. At first when Chi-Chi asked Goku to wed, he agreed, under the impression marriage was food. When he realized his mistake years later, he still gladly agreed to marry her anyway. By the Z series, she was a rather overprotective parent, worrying about Gohan's education (which clashed with his saving the world) and her family's welfare in general. 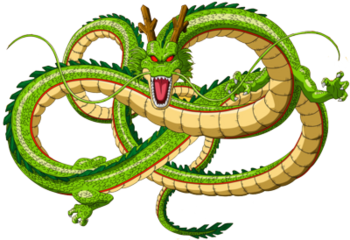 The dragon of the Earth's Dragon Balls, Shenron always comes out to grant wishes to whoever summons him. He was created as a small statue by Mr. Popo, then given life by Kami. After Kami merges with Piccolo, Shenron is given life anew by Dende. 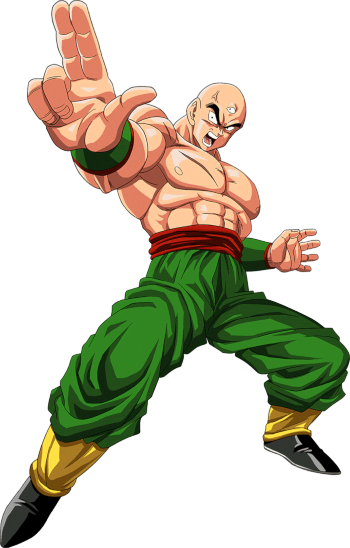 Introduced in the second World Martial Arts Tournament arc, Tenshinhan and Chiaotzu were initially rivals to Goku, Krillin, and Yamcha (as they belonged to an opposing dojo to Roshi's). The two eventually become friends to our heroes after realizing the lack of honor in their own methods. They become instrumental in the the next few arcs following their introduction, but by Z their roles had become less and less till they were reduced to cameo appearances and a few references in Dragon Ball GT. His role is expanded in Super, as he is shown to have founded a dojo himself, and participates in the Tournament of Power.

Introduced in the second Tournament arc, Tenshinhan and Chiaotzu are initially rivals to Goku, Krillin, and Yamcha (as they belong to an opposing dojo to Roshi's). The two eventually become friends to our heroes after realizing the lack of honor in their own methods. They become instrumental in the the next few arcs following their introduction, but after the Saiyan Saga Chiaotzu becomes less important (and after the Cell Saga, so does Tenshinhan). By the Cell Saga they become side characters who are mentioned and seen frequently, but rarely do anything significant. 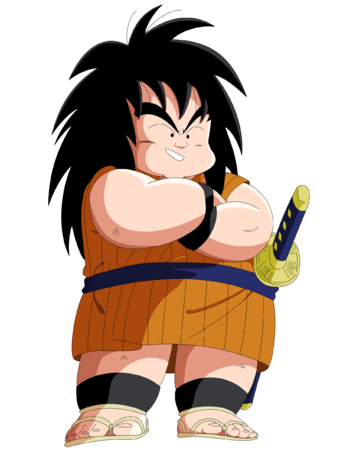 Yajirobe is a fat samurai vagabond who eventually started living with Korin. He usually acts as a Senzu Bean delivery man, but also helped fight off King Piccolo's henchmen and Vegeta himself. 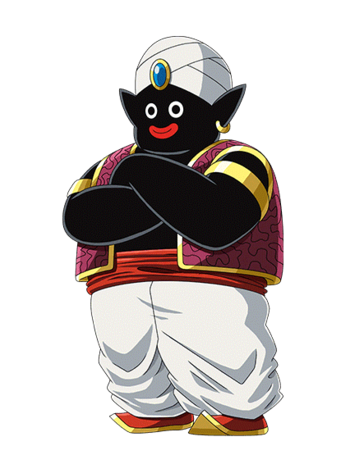 Kami's (and later Dende's) assistant and caretaker of his floating palace, Mr. Popo is a black (really black) genie person. Mr. Popo has apparently been around even longer than Kami has. Daizenshuu 7 clarifies that he's an attendant sent from Heaven to advise Earth's god. Mr. Popo helps train a young Goku for his fight against Piccolo in the 3rd Tournament arc, and in Z, shows the heroes Kami's old spaceship and teaches Bulma how to use it. 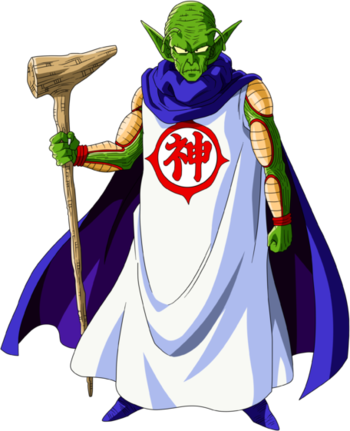 Goku's third mentor, and literally the God of Earth, Guardian of Earth in the English dub. An alien who was sent from Namek during a climate disaster, Kami, in his eagerness to earn this title, hastily expelled the evil within him to be worthy of it; this gave rise to the tyrant known as the Demon King Piccolo, and the guilt of being responsible for his existence has haunted Kami for centuries. He is also the creator of Earth's Dragon Balls and the Eternal Dragon Shenron.

Click here to see her as the Great Saiyawoman 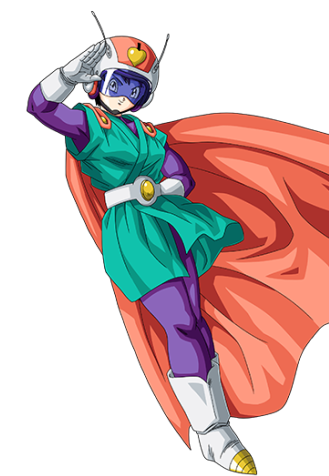 Mr. Satan's daughter and Gohan's girlfriend who became his wife. She is introduced as a crimefighter who far surpasses her father in strength. When a teenage Gohan appears on the scene as the "Gold Fighter" and then Saiyaman, she grows suspicious and eventually manages to find out Gohan's secret. However, the more she gets to know him, the more she falls for him and the rest is history from there. 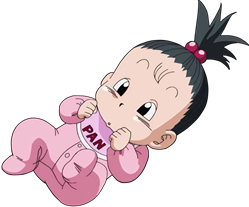 The daughter of Gohan and Videl, introduced at the tail end of the original series though given more of a fleshed out character in the anime-only GT series. Very much a tomboy and thrill-seeker, willing to prove she's just as tough as her grandfather when given the chance. But not without a soft side either.