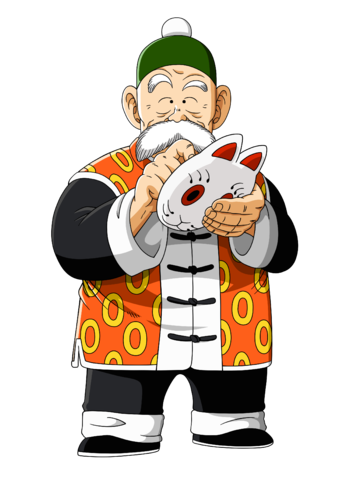 Goku's adoptive grandfather, the one who found him in the woods and initially trained him in martial arts. He died prior to the series, crushed to death by Goku's Great Ape form. Though mostly appearing in flashbacks, he makes an appearance in person during the Fortuneteller Baba Saga, and Goku's first son is named in his honor. 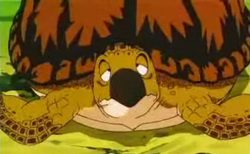 A turtle named Turtle, Master Roshi's loyal pet/housemate. Goku and Bulma met Turtle early in their search for the Dragon Balls when he was lost in the wilderness and returned him to Roshi, who gave Goku the Flying Nimbus as a reward. Turtle is good-natured and friendly but often frustrated at Roshi's skirt-chasing antics. 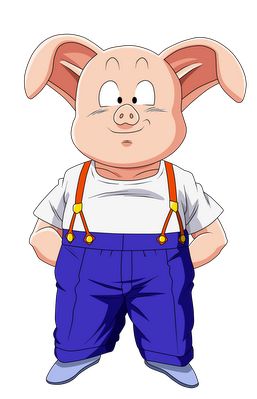 Originally a con artist who terrorized a small village using his shapeshifting powers, Oolong is a greedy, lecherous pig (literally); when Goku defeated him, Oolong joined him and Bulma in their search for the Dragon Balls. At first a useless whiner, Oolong later proved his worth by "stealing" Pilaf's wish from the Dragon Balls (by wishing for a pair of girl's panties). He and Puar were rivals in shapeshifting school, but because Oolong dropped out in kindergarten, his powers only allow him to stay transformed for five minutes.

A shapeshifting cat-like creature and Yamcha's closest friend. Puar is fiercely loyal to Yamcha. Puar mostly just provides moral support to Goku and friends, but saved everyone the first time Goku transformed into a Great Ape by cutting off Goku's tail. 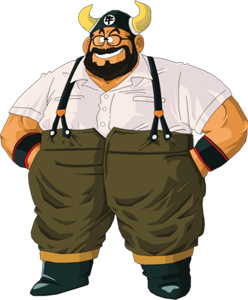 The legendary Ox-King of Fire Mountain.note also known as "Gyuumaou", literally Japanese for "Ox-King" The Ox-King terrorized the countryside to keep would-be thieves away from his castle. When Goku and his friends came looking for the Dragon Ball in his treasury, he relents (he couldn't get into his own castle anyway because of the wall of flames around it) and offers Goku his daughter Chi-Chi's hand in marriage. Ox-King turned out to be one of Master Roshi's pupils and a friend of Goku's Grandpa Gohan. After his daughter settled down with Goku, he became a doting grandfather to Gohan and Goten. 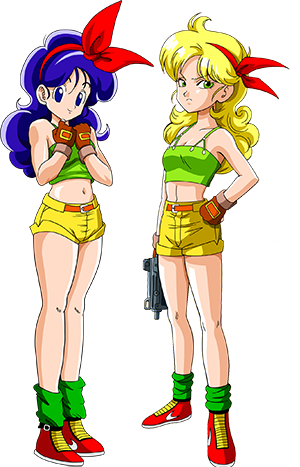 Minor joke character during the original series, was picked up and brought to Roshi by Goku and Krillin to bribe him into training the two. Her "moodswings"—really a split personality—when she sneezes provided a fair amount of comedy, shifting between a sweet blue-haired ingenue and a violent blond criminal. She's not heard from much in the Z series (because Akira Toriyama decided to write her out 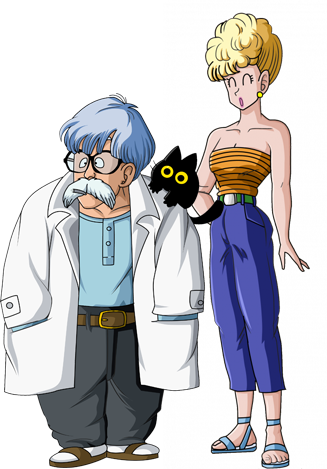 Dr. Brief is the founder of Capsule Corp and the father of Bulma. Bulma's Mom, Panchy, is the mother of Bulma and the wife of Dr. Brief. 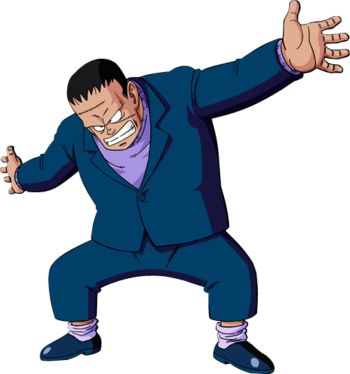 A Frankenstein-like monster and one of Doctor Gero's earliest Androids, 8 was rejected by the Red Ribbon Army due to his gentle nature. Helps out a young Goku during his raid on the Red Ribbon's Muscle Tower. 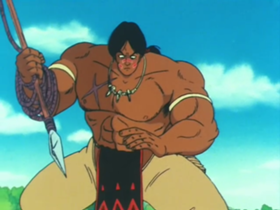 The chief of a native tribe that served as the guardians of Korin Tower. He and his son, Upa meet Goku after he finds a dragon ball and runs afoul of the Red Ribbon Army. Bora proved to be a very powerful warrior earlier in the series with gunfire deflecting off his body. 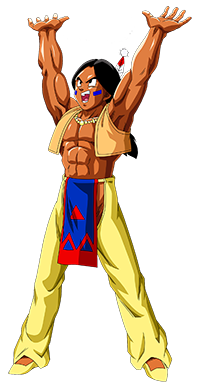 Bora's son and ally to Goku after he is saved from Captain Yellow of the Red Ribbon Army. Not nearly as brave or as powerful as Goku or his father, Upa helps Goku collect the dragon balls using them to wish his father back to life after being killed by Mercenary Tao. 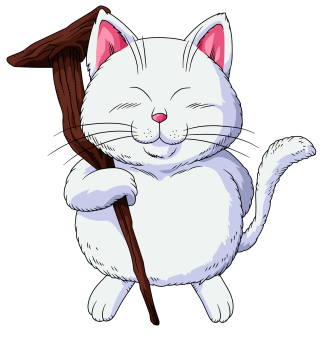 Goku's second mentor, Korinnote Karin in the original Japanese is an 800 year old talking cat who lives in a tower directly under Kami's lookout. Korin's Senzu Beans, which cause full healing from physical injury after being eaten, play a big part in the series. Korin was also Master Roshi's mentor 300 years earlier. 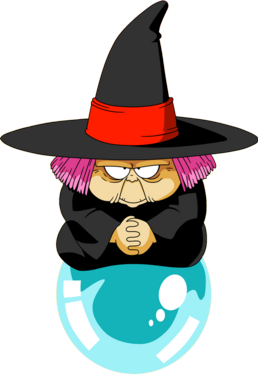 A small, old witch that can divine things with the crystal ball she floats around on. The older sister of Master Roshi, she lives in a pyramid, providing divinations to those who can match one of two requirements—pay an outrageous fee, or defeat her chosen champions in combat. She also cut a deal with King Yemma that lets her provide a dead warrior a 24-hour return to the living, making for some joyous reunions. After the Red Ribbon Army Saga, Goku's friends go to her for help finding the last Dragon Ball, and she periodically pops up to help for free, as the Z-warriors are now more powerful than any warrior she can employ. Also one of the notably few characters to never die in the series.

Baba disappears in the Z portion of the manga (though she still appears occasionally in anime filler), until the Buu Saga, where she first brings Goku back to life for one day to compete in the World Martial Arts Tournament, and later does the same for Vegeta after his Heroic Sacrifice. 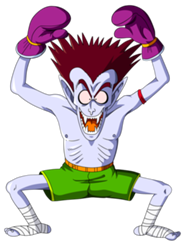 The first of Baba's warriors who Goku and the Dragon Team must fight to find the location of the last Dragon Ball needed to wish Upa's father back to life from Baba, who along with his sharp fangs and ability to turn into a vampire bat, is trained in the art of Muay Thai kickboxing. In his bat form, he moves faster than his opponent Krillin, can see. He then quickly puts Krillin a sleeper hold and bites his head sucking out the monk's blood. Kicking the disoriented Krillin out of the ring, he then faces Puar and Upa. What looks like an easy victory leads Fangs to defeat as Puar's superior shapeshifting abilities and Upa using garlic and his body shaped as a cross led to him being knocked into the water outside the ring. 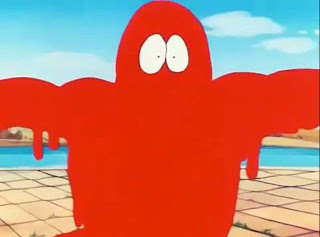 The second of Baba's warriors who Goku and the Dragon Team must fight to find the location of the last Dragon Ball needed to wish Upa's father back to life from Baba, who relies heavily on his invisible body in combat. He faces Yamcha and even though the former bandit gets a couple good hits in, See-Through has a clear advantage (with Baba singing to prevent Yamcha from hearing his movements and instructs her fighter to not talk). It isn't until Goku finds Bulma and Master Roshi and Krillin uses Roshi's perverted nature to bleed over the invisible man does See-Through loses his advantage. After Yamcha nails the now visible invisible man with the Wolf Fang Fist, he gives up. 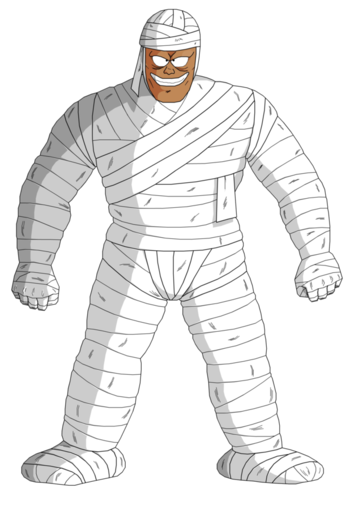 The third of Baba's warriors who Goku and the Dragon Team must fight to find the location of the last Dragon Ball needed to wish Upa's father back to life from Baba. whose Lightning Bruiser fighting style and ability to uses his bandages to quickly wrap up his opponents made him undefeated in combat. After befuddling Yamcha with his speed and abilities, he quickly defeats him and faces Goku next. Despite the Mummy Man's best efforts, he is felled but one hard punch to the stomach by Goku. 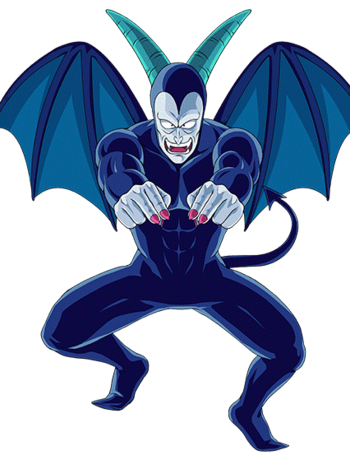 The fourth of Baba's warriors who Goku and the Dragon Team must fight to find the location of the last Dragon Ball needed to wish Upa's father back to life from Baba who is not only normally the final opponent (the top spot was filled by Grandpa Gohan who was brought in as a ringer by Baba to test Goku) but won the World Martial Arts Tournament twice prior to this. Among Spike's abilities and powers are speed, agility, winged flight, and pitchfork combat. Early on he struggles to fight Goku which prompts him to use the Devilmite Beam, a ki blast that kills his opponent if they even have a shred of evil within them. The attack is ineffective because Goku is pure of heart and Spike is defeated after a failed last-ditch effort to skewer Goku with his pitchfork. 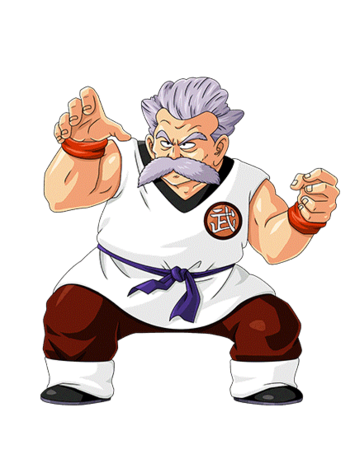 Master Mutaito was one of the greatest martial arts teachers of all time and the first known person to act as Earth's savior, despite dying hundreds of years before the series started. He was Master Roshi and Master Shen's teacher, both who went on to create their own respective schools and pass on his teachings to several generations of characters. 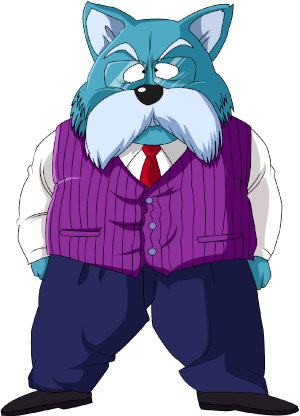 The King of the entire Earth. He's a blue dog.