The Sirius Team
These are all the members of Fairy Tail singled out to participate in an annual exam on the guild's sacred ground, Sirius Island, along with their partners and those conducting the exam. 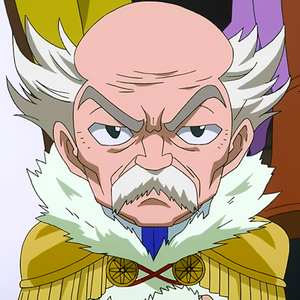 Makarov is the current guild master of Fairy Tail. Being one of the guild's oldest surviving members at almost 90 years old, he is a master of many forms of magic—including the size-increasing Giant magic—which has ranked him among the Ten Wizard Saints, those who are widely regarded as the most powerful wizards on the entire continent. The members of his guild often give him grief for the trouble they cause between him and the Magic Council, but he loves them as if they were all his children. Despite this, he has difficulty finding a good successor, as fate puts him back in charge whenever someone else takes the position. To date, he has served as the guild's third, sixth, and eventually eighth master. 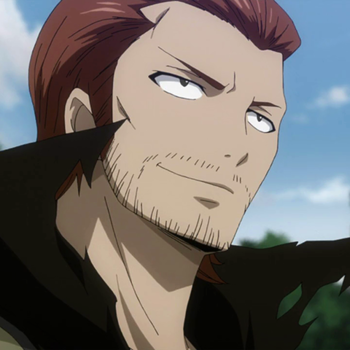 Gildarts is renowned as the most powerful member of Fairy Tail, bar none. He's also the father of Cana Alberona. His magic, Crush, effectively reduces anything he touches to dust. He takes on jobs that have never been completed for tens or even hundreds of years, and thus only visits his guild a couple of years at a time for short periods of time. After his return from Sirius Island, he is selected to become Fairy Tail's fifth master, but due to his extreme wanderlust, he shoves the position back onto Makarov.

See her entry on the Strongest Team page.
Mirajane Strauss

Mirajane is Fairy Tail's administrator and barmaid, as well as a famous pin-up model for Fiore's Weekly Sorcerer magazine. While she acts rather scatterbrained on the surface, her affable nature hides an indomitable will. Once a more abrasive young teen who'd regularly go on missions with her younger siblings, Elfman and Lisanna, she has since retired from field work following Lisanna's assumed demise in X782, though she becomes more active again after Lisanna returns.

She is an expert at using Transformation Magic to alter her appearance, clothes, and voice in any way she chooses. However, her true power is Takeover: Satan Soul, an ability that gives her the forms and powers of fearsome demons she defeats. 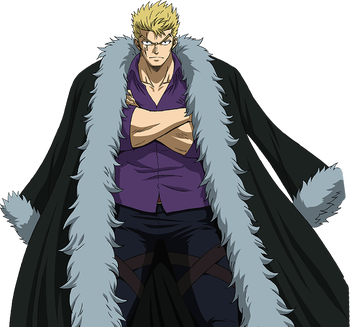 Laxus is the heir to the position of guild master, being the grandson of Makarov Dreyar and the son of the exiled wizard Ivan Dreyar. Growing up as a powerful and merciless young man who views Fairy Tail by strength alone, he has a rocky history with the guild that eventually leads to his decision to mutiny against his grandfather called the Battle of Fairy Tail. When his guildmates foil his plans, however, he is forced to confront his long-buried compassion for his family and friends. Following his temporary expulsion and a period of soul-searching, Laxus atones for his misdeeds and is eventually welcomed back into the guild.

On top of being an expert lightning wizard who can create and manipulate electricity, Laxus had a Dragon Slayer lacrima artificially implanted in his body by his father, Ivan, making him a second-generation Lightning Dragon Slayer. While he is technically a "fake" Dragon Slayer as he was not taught by a dragon, his magic is no less effective or dangerous.

S-Class Exam Participants and Their Partners 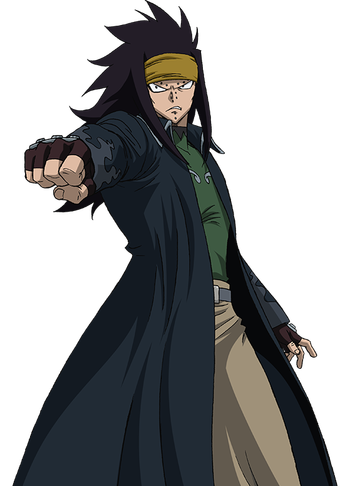 Gajeel is an Iron Dragon Slayer who is capable of transforming any part of his body into a metal weapon. Frustrated after the disappearance of his dragon, Metalicana, Gajeel starts out as one of Fairy Tail's most merciless and hated rivals from the Phantom Lord guild. However, as fate would have it, he ends up joining Fairy Tail after his old guild dissolves following their guild war. Against all odds, he works past his former adversaries' resentment and suspicion, eventually proving himself a trusted ally and valued friend. 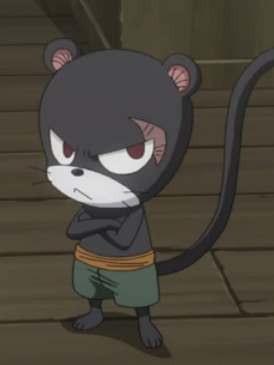 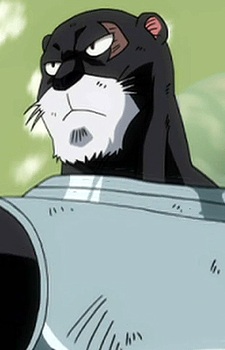 Panther Lily is an Exceed who was born and raised in Edolas. Banished from his home after aiding an injured human, Mystogan, he turned against his kind as Commander of the Edolas Royal Military's 1st Magical Warfare Division. After he and Gajeel gain their mutual respect in battle, Lily joins Fairy Tail as the Dragon Slayer's partner. He is abnormally large for an Exceed while in Edolas, and he can use Aera to fly like the rest of his kind. He assumes a much smaller form after traveling to Earth-land, though he can undergo a Battle Mode Shift to temporarily return to his original form. 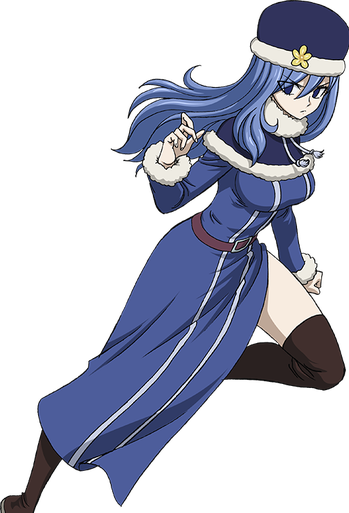 Juvia is the former Water Magic specialist of Phantom Lord's Element 4 who can use her powers to turn her entire body and clothes into liquid, and to create and manipulate water as she chooses. She grew up alone and unloved as a child since she always brought rain wherever she went. Upon meeting Gray Fullbuster during the war with Fairy Tail, she falls madly in love with him and joins his guild to pursue his affections following Phantom Lord's demise. Though her efforts are often ignored at best and rejected at worst, she slowly but surely becomes one of Gray's dearest companions. 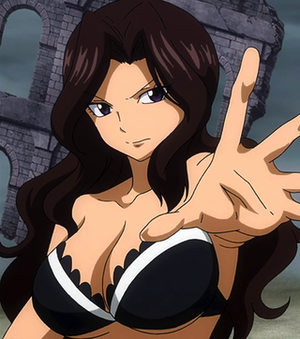 Cana is the guild's resident alcoholic, capable of drinking entire barrel-fulls of booze at a time. She's also the daughter of Gildarts Clive. She is a practitioner of Card Magic, which she uses to cast a variety of spells and read fortunes. Joining Fairy Tail at a young age to search for Gildarts after her mother's death, she has been at the guild longer than any members of her generation, and never fails to get along with anybody. 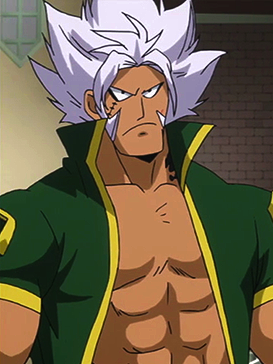 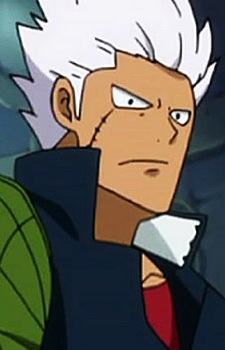 Elfman is Lisanna and Mirajane's middle brother who strongly believes in pride through physical strength and manliness. His form of Takeover, Beast Soul, transforms him into a variety of ferocious beasts and monsters. His magic went awry during a mission with Lisanna and Mirajane; following Lisanna's disappearance, he can only transform his right arm. Two years later, he regains his Full-Body Takeover abilities during the battle with Phantom Lord. 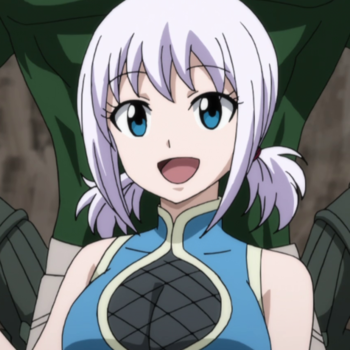 Lisanna is the the youngest of the Strauss siblings uses a variety of Takeover called Animal Soul to assume the forms and abilities of animals. She's also Natsu's childhood sweetheart, and helped him hatch Happy as an egg. Though she was seemingly killed after a mission with her siblings went tragically awry, it turned out that she was actually sucked into the parallel world of Edolas. After being mistaken for her own Edolas counterpart by her friends from her old world two years later, her true identity is discovered after getting sent back to Earth-land with the others, and she happily reunites with her friends and family.

Levy is the de facto leader of Shadow Gear, one of the many teams that make up the backbone of Fairy Tail. Her magic is called Solid Script, which allows her to transform any word she writes into solid objects with those properties. An avid bookworm, Levy is one of Lucy's closest friends in the guild, which came about when Levy found out Lucy was working on a novel.

The Raijin Tribenote "Thunder God Tribe" are a three-man team who serve as Laxus' personal bodyguards. They don't socialize much with the rest of the guild at first and support Laxus's desire to become guild master, but open up to them after the Battle of Fairy Tail. After the battle with Tartaros, the Raijin Tribe and Laxus join Blue Pegasus, only to rejoin Fairy Tail following its reorganization. 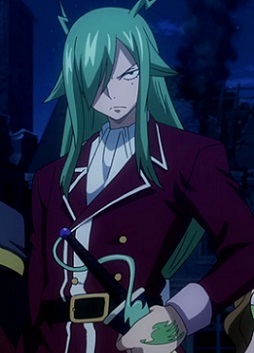 Fried is the leader of the Raijin Tribe, and the most loyal to Laxus. He specializes in writing jutsu-shiki, runic enchantments that affect the environment around him to his liking. He can also produce similar effects on people with his Dark Écriture spell. 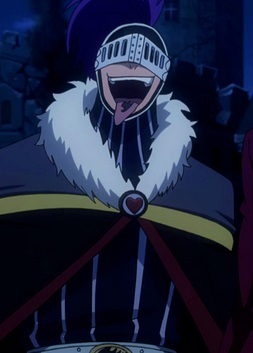 Bickslow is a wizard who uses a form of seith magic called Human Possession to manipulate five souls that inhabit dolls and follow him everywhere. He can also steal and control other people's souls with his Figure Eyes ability. 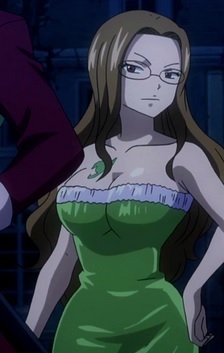 Evergreen is a young woman obsessed with fairies, only joining Fairy Tail because she liked the name. She uses her Stone Eyes ability to turn people into stone, and she can produce fairy dust to perform a variety of attacks and abilities.

These Fairy Tail members, while participants in the exam, were not present on the island when it was attacked and thus were not labeled as "missing".

See his entry on the Celestial Spirits page as Leo.
Mest Gryder / Doranbalt 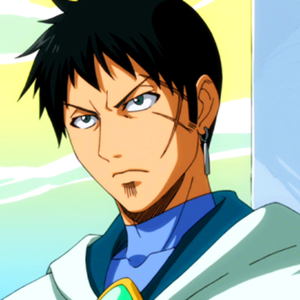 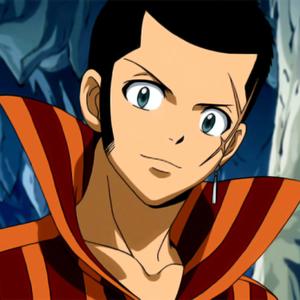 Mest is a wizard who can use memory-altering magic to wipe and edit others' memories, and a form of teleportation magic called Direct Line to travel long distances in the blink of an eye. Dispatched by Makarov to gather top-secret intel from the Magic Council, he works his memory charm on himself to disguise himself as an intelligence operative named Doranbalt, ironically turning against his own guild. However, he discovers himself to have been a bona fide member of Fairy Tail all along. Despite all the confusion, Mest proves himself a valuable ally to the guild.