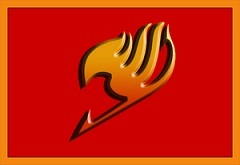 Formed by Mavis Vermillion, Yuri Dreyar, Precht Gaebolg (who would later become known as Hades) and Warrod Sequen in X686, Fairy Tail is the most famous wizards' guild in the Kingdom of Fiore, most widely known for producing some of the most powerful wizards in the history of magic—so powerful, in fact, they cause unintended destruction no matter what they do. Founded over one hundred years ago by Mavis Vermillion, the guild was named in honor of the age old question, "Do fairies have tails? Do they even exist?", which represents an mystery, and thus an eternal adventure. As the titular guild of the series, its members and the adventures they embark on serve as the central focus of the series.

Fairy Tail is stationed in the town of Magnolia, its original guildhall standing for nearly a century until its destruction and subsequent renovation following a war with the rival guild Phantom Lord in X784. The guild suffered a seven-year dark period after its strongest members went missing along with its sacred ground of Sirius Island, although it returned to its former glory after said members returned in X791 and broke the guild's losing streak in the annual Grand Magic Games. In the aftermath of the battle with Tartaros, Fairy Tail officially dissolved to avoid being targeted by the Alvarez Empire, which wished to exploit its darkest secret. After one year of physical and emotional recovery, the guild reunited for good.