Celestial Spirits are beings from another world who are summoned specifically by celestial wizards such as Lucy using a set of magic keys (called Gatekeys) to summon them. 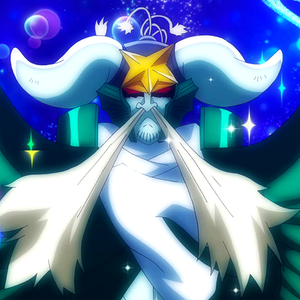 The sovereign of the Celestial Spirit World, and the most powerful spirit of all. Though he may appear intimidating and stony-faced, he is not unjust and is extremely amicable to those he considers his friends and allies.

Gold Keys of the Zodiac

There are twelve different types of golden Zodiac keys that can be used to summon one of the twelve spirits of the Zodiac, only one of each key existing in the world. Incidentally, all the gold keys introduced in the series come into Lucy's possession, with the exception of three, which are in the possession of Yukino Agria. 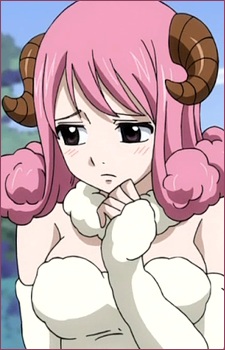 Aries is a meek spirit who can conjure fluffy pink clouds of wool in battle. Her original master was the abusive Karen Lilica until Angel killed Karen and took her key as the spoils of battle. After Angel is defeated, Aries comes into Lucy's possession. 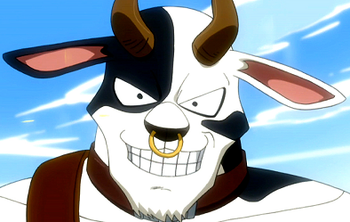 Taurus is a minotaur who possesses Herculean strength, but is also a total pervert who is constantly distracted by Lucy's hot body. He is the first of Lucy's Zodiac spirits who wasn't inherited from her mother.

Gemini are a pair of spirits who can mimic the appearance, powers, and thoughts of anyone they see. They are Angel's signature spirits and follow her orders without question until Lucy proves to be a more caring master. 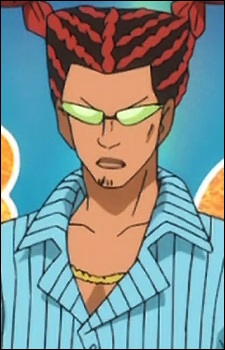 Cancer is a cool hairstylist who wields scissors that can cut through virtually anything. He is one of Lucy's first spirits, inherited from her mother. 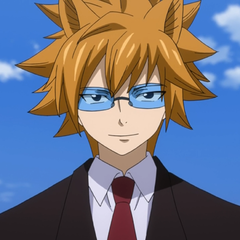 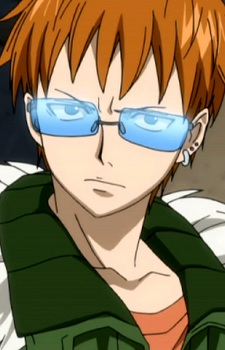 Leo is a playboy who is hardly ever seen outside the company of young ladies. Banished from the spirit world after accidentally causing the death of his past owner, Karen Lilica, Leo joins the Fairy Tail guild to spend his limited lifespan as a wizard named Loke. After Lucy overturns his sentence, he joins her as one of her most trusted spirit partners. In his spirit form, Loke wears the magic finger ring Regulus to clad his body in light. 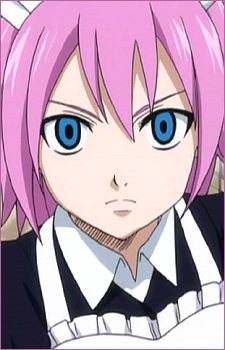 Virgo is a masochistic maid who can burrow underground and manipulate earth, making her one of Lucy's top combat-ready spirits. Originally owned by Duke Everlue, she makes a new contract with Lucy after the duke is arrested. 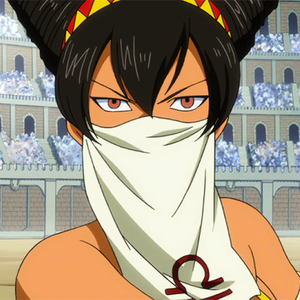 Libra is a belly dancer who wields balance plates that can alter the gravity of any target. She is owned by Yukino. 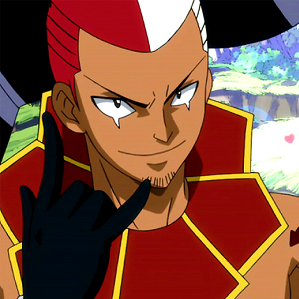 Scorpio is a spirit with a tail-shaped cannon on his back that can shoot blasts of sand. He is also Aquarius' boyfriend. He is initially owned by Angel until he decides Lucy would make a much better master. 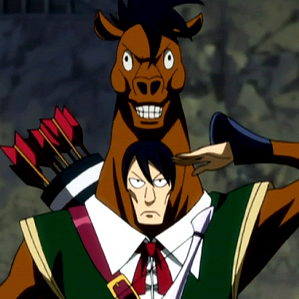 Sagittarius is a master bowman in a horse costume who never misses his target. His key is given to Lucy by the natives of Galuna Island as a reward for helping them. 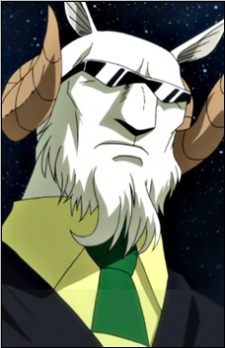 Capricorn is a goat-like man who looks and acts like a butler. He was meant to be inherited by Lucy from her mother along with Aquarius and Cancer, but due to certain complications with his interim owner Zoldio, his key doesn't come into Lucy's possession for 17 years. 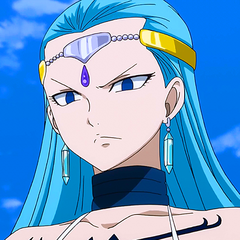 Aquarius is a mermaid who carries an urn filled with a limitless supply of water. She is one of the spirits Lucy inherited from her mother Layla, but hates her new owner's guts and often attacks her instead of her intended targets. Whenever Aquarius shows up, someone's usually bound to get hurt badly. 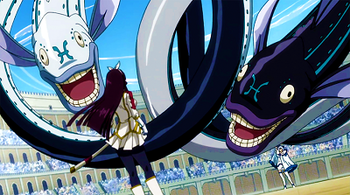 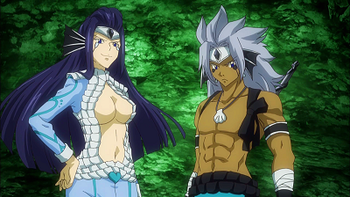 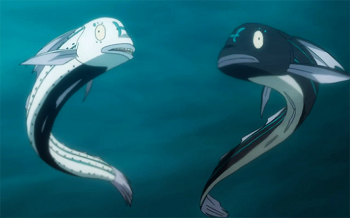 Pisces are a pair of giant fish who attack their target in tandem. Their true forms are those of a human mother and child. They are one of Yukino's signature spirits. 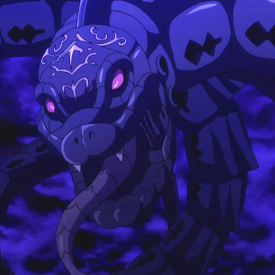 Ophiuchus is a massive, snake-like spirit who is regarded as the thirteenth Zodiac spirit, more powerful than the other twelve. It is owned by Yukino as her ultimate spirit.

Spirits who are summoned using common silver keys are not typically summoned for combat purposes, but are rather done for casual reasons.

Nikora spirits are an incredibly common and adorable breed of "dog" spirit representing Canis Minor. They take a minimal amount of effort to summon, making them ideal pets. 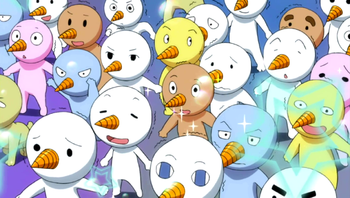 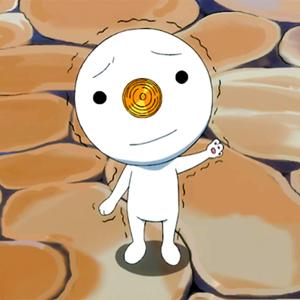 Plue is a Nikora spirit owned by Lucy, named for his constant tremblingnote the Japanese onomatopoeia is puru puru. He sure looks familiar...

See his entry on the Anime (Series 1) page. 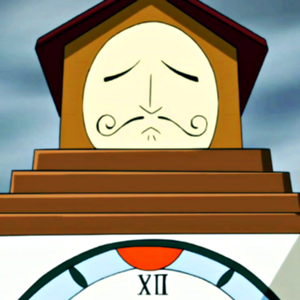 Horologium is a talking grandfather clock who Lucy tends to summon to use as shelter from hazardous environments. 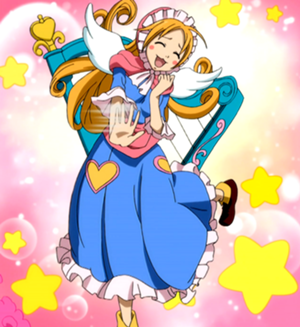 Lyra is a spirit who is typically summoned for her soothing singing voice. 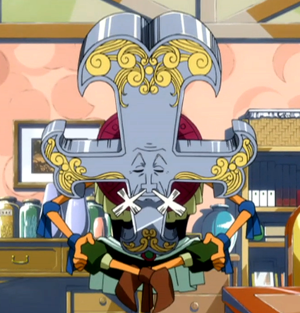 Crux is an old spirit with a cross-shaped head. He has an encyclopedic knowledge of celestial spirits and their owners, which he obtains whenever he's asleep. 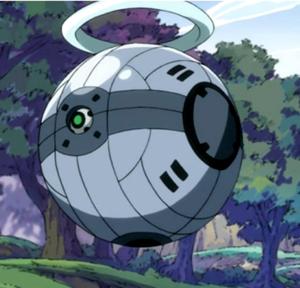 Caelum is a mechanical orb that is used as a weapon. It is one of Angel's contracted spirits. 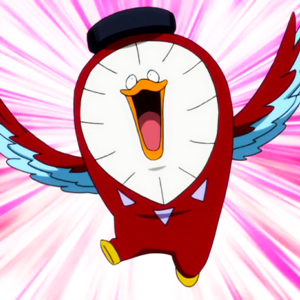 Pyxis is a bird with a compass on its head, which is useful for navigating complex areas.

See his entry on the Anime (Series 2) page.
Deneb

See his entry on the Anime (Series 2) page.