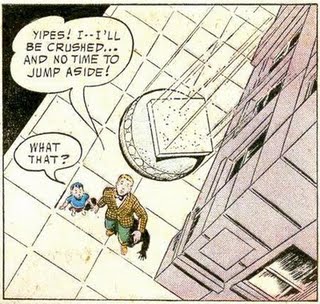 If you have time to talk about how you don't have enough time to dodge it, then you have time to... you know, dodge it.
Ilaney: [Wolverine] says much during one leap, no?
Doctor Bong: Excellent observation, Ilaney... I believe lengthy speeches in mid-leap are a form of mutant power.
— Deadpool #27
Advertisement:

The Trope Namer is Dungeons & Dragons, in which certain actions (most notably talking) are designated "free actions" and can be taken in addition to any other actions within the normal limit of a turn. A turn in D&D is said to take six seconds in-universe; being restricted to only what a player could say in six seconds wouldn't allow any time for planning, strategizing, or just calling out what you're going to do. Talking does not distract the player from any other actions, and there is no word count limit on how much the player can say. This is a case of Rule of Fun and Acceptable Breaks from Reality; spouting a Bond One-Liner during combat is awesome, but no one would do it when it would impair combat performance.

Parodied by these two anime fighters.

Parodied by these two anime fighters.