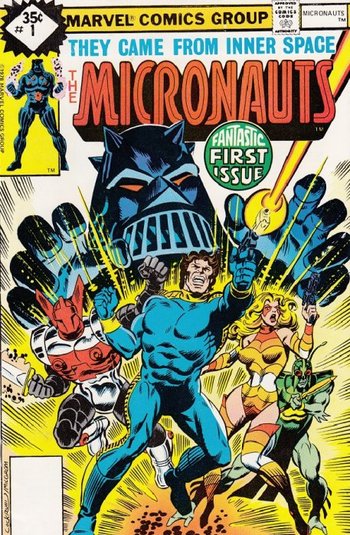 "They Came From Inner Space!"

The Micronauts originated as a line of action figures from Mego, actually a rebranding of Japan's Microman series of toys, which lasted from 1976 to 1980note  (after that, Microman spawned New Microman and then Microchange; many of the Microchange toys became part of the initial Transformers range (specifically the ones that turned into objects, like Megatron (a gun) and Soundwave (a cassette player); many of the Minibots were also from this line). Microman was revived in Japan in 1999, then again in 2003 (the 2003 series has been aimed towards collectors rather than kids). The toys were popular, but the Marvel Comics comic book series based on them, written by Bill Mantlo, outlasted the toyline by many years. The original series lasted for 59 regular issues (January, 1979- August, 1984), plus 2 annuals. They had a mini-series crossover with the X-Men which lasted for 4 issues (January-April, 1984). Then their title was relaunched as Micronauts: The New Voyages, lasting for 20 issues (October, 1984-May, 1986).

The comic told the story of the Micronauts, part of a resistance force that opposed an evil empire in a Subatomic Universe. Team members included Commander Arcturus Rann, the leader; Marionnette, his lover; the insect-like warrior Bug; the hulking warrior Acroyear; and the robots Biotron and Microtron. They are later joined by the shape-shifter Huntarr.

The series begins with the Micronauts (and their enemy, Baron Karza) accidentally transported to Earth (where they are only as big as action figures) where a young boy is involved in their battle. However the characters soon returned to the Microverse and stayed there for most of the series, as the writer developed its impressive backstory. Eventually they kill Karza (twice) but suffer devastating loses in the process, and some team members died.

Marvel no longer owns the license to the Micronauts, but can still use all elements of the comic series that they invented themselves. That is, Arcturus Rann can still appear, as long as he doesn't call himself Space Glider or wear his Space Glider uniform; Bug can still appear as long as he doesn't call himself Galactic Warrior, etc. Bug is an interesting case, since he bears so little resemblance to his toy that Marvel can apparently use him with complete impunity. Marionette (Princess Mari) is a completely original character created by Bill Mantlo for the comic book series. (Hasbro might own some rights, given how their Mega Crossover comic seen at NYCC 2011, called Unit: E had them in there, as central characters; Hasbro still has a close working relationship with Takara, having Takara distribute their products like Nerf and Jenga in Japan, outside of their collaboration with Transformers)

Probably the series' most lasting impact on the wider Marvel Universe was the introduction (or at least the naming) of the Microverse, an Alternate Dimension that one enters if shrunk down past subatomic size. It was eventually established that the Microverse is a complete separate universe, and does not literally exist within some particular single atom somewhere; but shrinking down is the standard means of crossing into it. In the Marvel Universe in general, anyone who shrinks below a certain limit (apparantly somewhere between cellular size and molecular size) shifts into a "microverse" - the theory is that a shrinking person is actually displacing their mass extradimensionally, and when 99.99999999999999% is over there, the rest (and consciousness) follows. Among the notable inhabitants of microverses are Fantastic Four enemy Psycho Man, Jarella (a lover of the Hulk for a while), and the Micronauts. To be fair, Stan and Jack and even Harlan Ellison (creator of the above-mentioned Jarella) had done "subatomic world" stories years ago, but The Micronauts finally named the place, and standardized the rules for how it worked.

Additionally, the Micronauts are closely connected to Captain Universe: The Uni-Power which bonds with hosts in the Macroverse (the main Marvel universe) is actually a facet of the Enigma Force, and the Engima Force itself essentially is the Microverse. One of the primary functions of the Uni-Power is to maintain the Spacewall (the physical barrier between the Microverse and the Macroverse, and with it imprison a malevolent force of Eldritch Abominations called the Whirldemons that threaten the inhabitants of both).

The team was last seen doing cameos in a couple of Marvel comics under the new alias of "The Microns" due to Marvel losing the rights to the IPs that originated in the toyline, their most recent appearance to date being in the Minimum Carnage event. Bug has also been a sometime member of the new Guardians of the Galaxy.

In 2002, Image Comics obtained the comic book license to the Micronauts franchise through then-rights holder Abrams Gentile Entertainment and produced a new comic book series through Devil's Due Publishing, which lasted 11 issues. A four-issue miniseries explaining Baron Karza's origins and a three-issue series published by Devil's Due Publishing independently of Image were also published.

In 2015, first IDW Publishing announced comic book reboots of this series and Rom Spaceknight (as Hasbro still owns partial rights to both of them), and in December it was announced Hasbro and Paramount Pictures would create a new Hasbro movie-verse with the GI Joe movies as the starting point, with reimagined versions of this series as well as ROM, the Visionaries and M.A.S.K.. 2016 saw IDW take a similar route with most of their Hasbro titles, with a new Shared Universe being established by an event called Revolution. For tropes relating to the IDW reboot, see Micronauts (IDW). For the anime series based on the Japanese Microman toys, see Chiisana Kyojin Microman.

The toy line provides examples of: