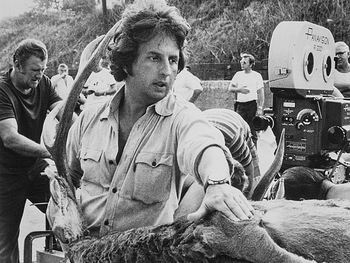 "Your favorite film is always the film you haven't made yet."
— from a 2015 interview with The Hollywood Reporter
Advertisement:

Michael Cimino (February 3, 1939 – July 2, 2016) was an American film director, screenwriter and producer. His career is best known for being probably one of Hollywood's biggest real-life Greek tragedies; directing, producing and co-writing the commercially successful Academy Award-winning film The Deer Hunter (1978), and following it two years later by writing and directing the infamous critical and financial failure Heaven's Gate (1980).

After a successful run as a director of television commercials, he moved into feature film in the early 1970s. He began as a co-writer for the films Silent Running and Magnum Force. He then made his debut as a director with Thunderbolt and Lightfoot, which he had also written the script for. He then directed The Deer Hunter, an epic and gritty film about three American steelworkers who participate in The Vietnam War. Despite some delays and cost overruns, the film was a critical and commercial success. The Deer Hunter earned five Academy Awards and Cimino gained a reputation for being one of the up-and-coming directors in Hollywood. Cimino was ambitious and the embodiment of The Perfectionist. His style favored making an Epic Movie with leisurely pacing and an emphasis on the visuals.

But Cimino's career fell even quicker than it rose. His next film, Heaven's Gate, was fraught with troubled production on a far greater scale. The press picked up stories of Cimino's hyper-perfectionist directing style. Allegedly, he delayed filming on one day until a cloud formation he liked matched what he wanted, ordered the buildings on each side of the set of the town's main street to be torn down and rebuilt three feet back from where they were because the street looked too narrow, even after one crew member pointed out that it would be easier and cheaper to just tear one side down and rebuild it six feet back, and took 36 takes of Christopher Walken taking off his hat. After a messy release that was nearly a year overdue, the film was a critical and commercial flop. It was a Creator Killer for both Cimino and United Artists and a Genre-Killer for both The Western (at least, for its classic era) and particularly the New Hollywood era. Never again would studios give directors so much control over the filming process.

In the next 16 years, Cimino directed four further films, but his career was punch drunk from Heaven's Gate. He was also hired to direct Footloose but was fired after four months for demanding a script rewrite. He was keen to make the film more epic in scope, but the producers feared a repeat of Heaven's Gate, and he eventually retired from directing in 1996. He had many unrealised ambitions (enough to have its own article on Wikipedia), including interest in adapting Crime and Punishment and The Fountainhead; some of these plans stretched into the final years of his life, long after his retirement. In later years, Heaven's Gate underwent a partial rehabilitation among critics. In 2012, Cimino attended the premiere of a well-received new edit of Heaven's gate at the Venice Film Festival. This edit was subsequently released on home video to much better reviews. However, Cimino's career would never see a revival; despite his continuing ambitions of returning to the director's chair he would die in 2016, remembered primarily as the man who killed the New Hollywood era and as the biggest cautionary tale against hubris in the film industry.

Tropes common to Cimino and his works include: