WARNING! This page assumes you have played through the game. UNMARKED SPOILERS AHEAD!!! 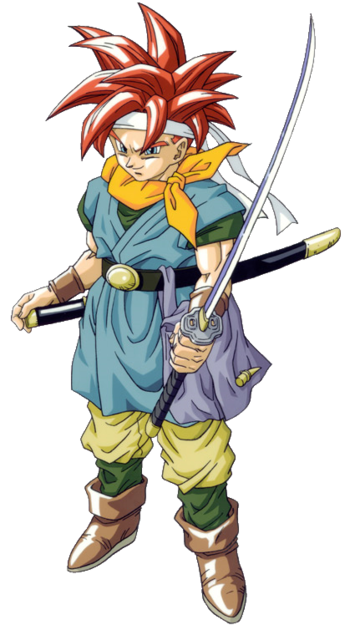 Our hero. A young boy from the village of Truce in 1000 A.D. who lives with his mother and cat. Doesn't say much, but becomes quite the hero after being sucked back in time.

One of Crono's friends from 1000 A.D. Lucca is very good with gadgets, a trait she inherited from her father, Taban. She discovered small pockets of distortions in time (which she dubbed "Gates") after an accident at Leene Square hurled Marle back in time to 600 A.D. She has emotional baggage of her own, having buried herself in scientific knowledge at a young age after helplessly witnessing her mother become disabled in an accident. 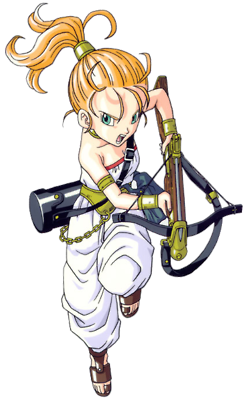 A blonde girl with a mysterious pendant who bumps into Crono at the Millennial Fair and tags along. She is actually Princess Nadia of Guardia Castle in 1000 A.D., fed up with the trappings of royal life (ie. not being able to go anywhere without the approval of her father, King Guardia XXXIII). 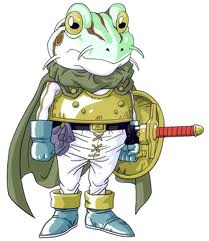 A renowned warrior of the kingdom of Guardia, hailing from 600 A.D. He was originally a human named Glenn, placed under a curse by Magus and sworn to defeat him to avenge his best friend Cyrus. 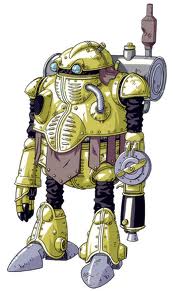 An R Series robot from 2300 A.D. with the serial number R-66Y that Crono and friends find and name in the Proto Dome, seemingly abandoned by his creators. He joins the party after Lucca repairs him in order to help them change the future. He may be surprised to learn that his real designated name is Prometheus, and that his old robot friends have revolted against the last remnants of humanity to establish a new society.

A strong, burly, female tribal chief from 65,000,000 B.C. As a leader of the early humans, she is a key figure in the struggle for supremacy against the Reptites. Among her achievements is notably the naming of Lavos, as it stands for "fire" (La) and "big" (Vos) in her words.

A Planetary Parasite that ruined many lives and changed the world forever after its eruption in the Day of Lavos, 1999 A.D. It first arrived from space in 65,000,000 B.C. 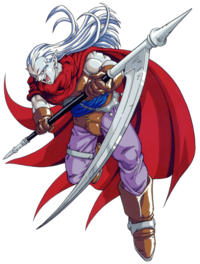 A mystic warlock from 600 A.D. who is still worshipped by Medina locals in 1000 A.D., and wielder of many forms of arcane magic. He has a connection to Lavos, the being destined to destroy the world. The party initially assumes that Magus created Lavos, but it turns out he was only summoning the creature to personally prevent it from causing even more damage to the planet, using the era's major conflict to achieve his own ends. The party later finds out about his origins as the child prince Janus in 12,000 B.C. 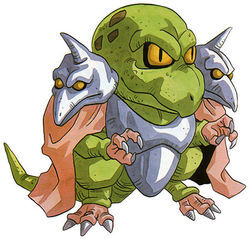 Leader of the Reptites of 65,000,000 B.C., a race of lizard creatures that consider themselves the natural enemies of the early humans.

Leader of the magical civilization that thrived (and was eventually destroyed) in 12,000 B.C. She used the Mammon Machine to draw upon Lavos's power to keep the floating city alive. Has two children, Janus and Schala. 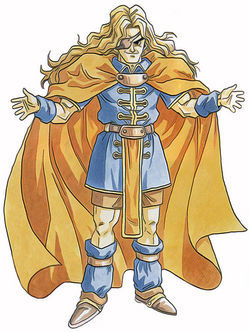 A monster from 600 A.D. whose forces kidnapped Queen Leene and attempted to assassinate her. Thanks to meddling with time travel, he is only one of a long line of monsters that has opposed the Guardia royal family since 600 A.D. 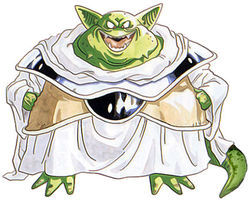 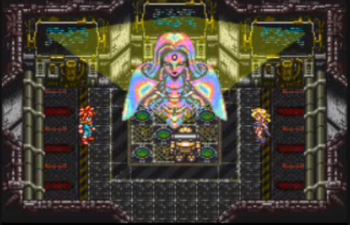 Mother Brain was the central computer that linked the domes and factories together. After the planet is ruined by Lavos, Mother Brain becomes responsible for the uprising of robots over humans.

The princess of Zeal, the older sister of Janus (later known as Magus), and original owner of Marle's pendant. A kind and gentle young woman who played a rather unwilling part in the Ocean Palace incident. 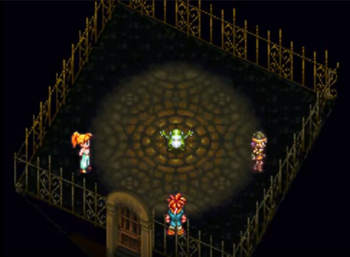 Spekkio in his frog form. He also appears as a Kilwala, an Ogan, a Gaoler, an alternate version of Masa & Mune and his final form, a pink Nu.
A strange magical being hidden at the End of Time and the "master of war". He gives Crono, Lucca, Marle, and Frog their magic abilities.
The Gurus of Life, Time, and Reason

The Guru of Life (Melchior), the Guru of Time (Gaspar), and the Guru of Reason (Belthasar) who originally lived in 12,000 B.C. They try to stop Queen Zeal from harnessing the energy of Lavos. When Lavos is summoned, it sends the three of them along with Janus to different periods in time.

The Guru of Life, Melchior 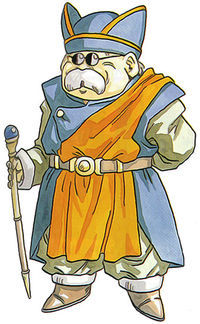 The Guru of Time, Gaspar

The Guru of Reason, Belthasar 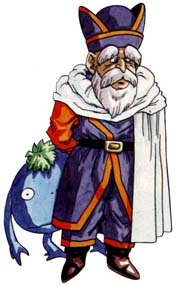 A young boy living in Porre in the year 600 AD. Midway through the game, he is confused for Guardia's foretold hero, and decides to roll with it. 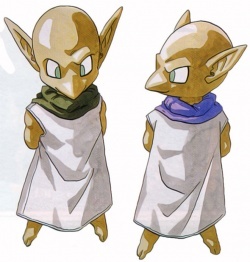 Mischievous twins that compose the spiritual side of the sword Masamune, forged by Melchior. Mune wishes to be the wind, while Masa is slightly more mature. While their exact nature is unknown, they are said to be Melchior's dreams residual in the sword. They have the ability to teleport at will, and, when inside the Masamune, can make it levitate and move on its own.

In Chrono Cross, the Masamune has turned into a blade of pure evil. Stolen in the Fall of Guardia and presumably used to kill many, it drives those who wield it insane for as long as they hold it.