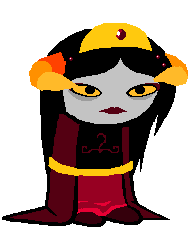 You are very BUBBLY. You have a high ranking on the HEMOSPECTRUM, the highest of your entire session. But oh, you couldn't care less! You are not what one would call a REBELLIOUS PRINCESS, you are as a matter of fact not royalty at all, you just can't be bothered with behaving like you are BETTER THAN EVERYBODY ELSE. You do however take your ARISTOCRATIC DUTIES very seriously. Those of your caste are JUDGES of a sort, it will be your job in the future to give criminals their proper fate. Not a lot of fun, but what'cha gonna do?

A kind and gentle troll who'd rather have fun with her friends than mistreat them as those of her caste usually do. 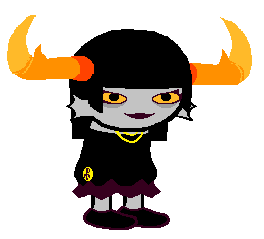 You are obsessed with TORTURE in all its forms. This interest stems from your ANCESTOR, who was a brilliant torturess. You aim to become like her, and this reflects on your behaviour. Because of this, people tend to find you rather creepy, but you don't mind that at all. In fact, you tend to be rather gleeful about it. Well, you tend to be gleeful about most anything. That might be because you adore CHAOS in any shape or form. Even if you don't cause it yourself, you enjoy watching it begin and unrevel.

A rather shrewd and borderline psychopathic troll who plays the game mostly for the chance to fuck things up. 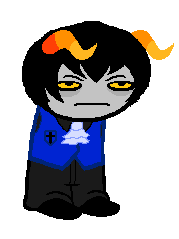 Wow, that's quite A FROWN you've got there! Not that anyone'd take note of this, since you are PERPETUALLY GRUMPY. Actually, if anyone did take the time to point this out, you'd probably FLIP THE FUCK OUT and give them what for. It'd be very unpleasant, seeing as you are a HIGHBLOOD and therefore wields EXTREME STRENGTH.

A troll who's happy to show when he's being annoyed but reluctant to cease being secretive with his other emotions. 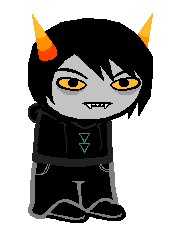 You are quite SERIOUS. Yes, you're so serious people tend to think you're a bit of a KILLJOY. But that is perfectly fine, you have no intention of changing who you are. To be completely honest, the opinions of others don't really matter. You prefer being on your own anyway. Mirroring your personality, your hive is NEATLY ORGANIZED. Not because you knew we would come, but because you simply always keep your things where they ought to be.

A quiet troll who likes to keep behind the stage and observe what's going on without getting actively involved. 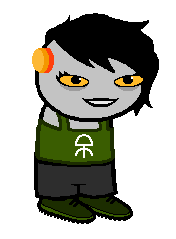 Well, aren't you happy! You're usually happy, because everything is so much FUN. Except the things that aren't. But you tend to stay away from them anyway. Your hive is a lovely mess of MECHANICAL INSTRUMENTS and BOTANY ARTICLES. Keeping your hive tidy is not fun in the least. Sometimes you step on A WRENCH or a WATERING CAN, because you do not pay much attention to where you're going.

A cheerful troll who gives the impression of having too much sugar in her diet. 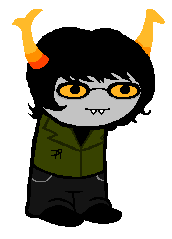 Your name is LEONAD AVIANT. You have a tremendous passion for COMICS, or as most people who read them like to call them, GRAPHIC NOVELS, or as you call them, COMICS. This is proven by the fact that you've read 3,473 comic collections and the fact that you know this. You're a MIDBLOOD, though you don't give the hemospectrum much thought. You don't give ANYTHING much thought, since you have an attention span as short as the life of a hemophobic rainbowdrinker. Your LUSUS is a huge FLYING FISH, which is big even by the standards of BIG FLYING FISH.

He might not be able to stay focused for very long, but... Sorry, you were saying? 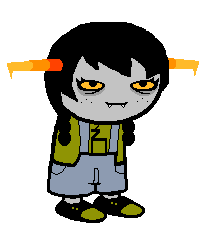 A troll who has her feet on the ground and thinks that you had better calm your tits. 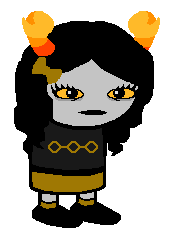 A troll who makes up in enthusiasm what she lacks in maturity.

A troll who is like a boss except for the part that involves any actual authority. 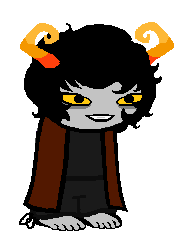 You are quite IMPORTANT. Or at least you would be if people KNEW YOU WERE HERE. Very few do, because the FOREST in which you live is currently only inhabited by you and your LYNXMOM. It is your SACRED DUTY to guard this forest, as it was your ANCESTOR'S before you. Of course, you have never met her, but you KNOW FOR SURE that she existed.

She might be a psychopath, but she's a cute psychopath. 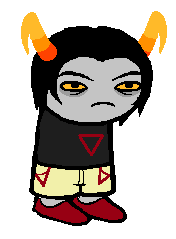 A troll that's so unlikeable that you'd feel sorry for him if you weren't busy loathing him.

The pre-Scratch incarnation of The Contessa (Padora's ancestor). In Sburb, she is the Thief of Heart. She has a nice side, but does her best to ignore it
Selena

The pre-Scratch incarnation of The Punisher (Tucana's ancestor). In Sburb, she is the Maid of Light. The sophisticated kind of maniac.
Arrigo

The pre-Scratch incarnation of Traveler Bluepack (Duilio's ancestor). In Sburb, he is the Mage of Rage. The big brother you never had, except he's not a jerk.
Skylos

The pre-Scratch incarnation of Revenger Tealstar (Asteon's ancestor). In Sburb, he is the Heir of Blood. Cute, but few cards short of a deck.
Zagadi

The pre-Scratch incarnation of Flighter Bileboil (Sanisa's ancestor). In Sburb, she is the Sylph of Breath. Was a valuable and useful member of the group.
Samaki

The pre-Scratch incarnation of The Granolix (Alshat's ancestor). In Sburb, she is the Rogue of Life. A troll who understands that love isn't always nice.
Oriyan

The pre-Scratch incarnation of The Cortisan (Rigela's ancestor). The R-rated kind of person.In Sburb, she is the Witch of Doom.
Banjir

The pre-Scratch incarnation of The Salesman (Idanus' ancestor). In Sburb, he is the Prince of Space. A charming rogue. Except he's the prince, not the rouge. He and Samaki were responsible for causing the Scratch.
Maiyah

The pre-scratch incarnation of The Huntress (Celano's ancestor). In Sburb, she is the Knight of Hope. Like a mother of steel.
Demped

He's kind of shy, but nevertheless totally extreme, man.In Sburb, he is the Seer of Void.. 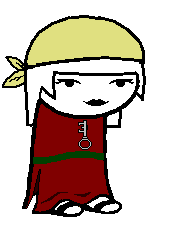 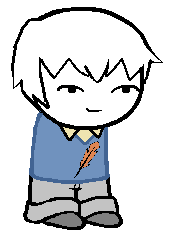 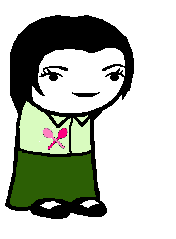 Asteon's ancestor. Was in both a matespritship and a kismesisitude with The Punisher and moirailleagiance with Traveler Bluepack. Went on a Roaring Rampage of Revenge and earned himself the title Revenger.