Characters / The Dresden Files  The Fae

Characters from The Dresden Files, the Fae.

open/close all folders
In General
Exactly as the name implies, these guys are The Fair Folk. They're mostly divided into the warring Summer and Winter Courts, with those outside the Courts known as "wyldfae". The Fae are ruled by a Byzantine series of laws and restrictions that govern how various members of each Court can act, but they have become masters at working within these restrictions. For example, as a rule they Cannot Tell a Lie, but they're absolutely ruthless rules lawyers about Exact Words, and being in debt to a faerie is... bad, to say the least. They range in power from the relatively harmless (pixies) to the greater-than-godlike (Mother Summer and Mother Winter). Luckily for the Puny Earthlings, all Fae have an Achilles' Heel: iron and steel will burn them and cut through their magic instantly.
Mother Summer and Mother Winter 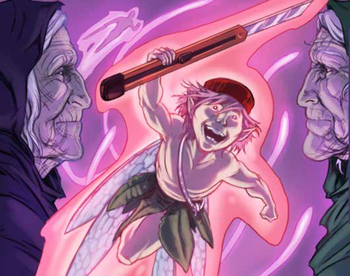 The Mothers and Toot
Mother Winter: Simply tell us, boy. Which is more important. The body—
Mother Summer: Or the soul.

First appearance in Summer Knight. Two sisters who are beyond ancient. The mothers of Mab and Titania, respectively. They do not live with their daughters or granddaughters, but are still well respected by everyone in both courts. Mother Summer can be seen as the progenitor of nature. She cares for the growth of all, from human development to plagues that could wipe out all other species. Mother Winter is destroyer of nature. She is the final end of it all. They both live in a small cottage together.

For Sir Harry, see his page.

Mab, Queen of Air and Darkness 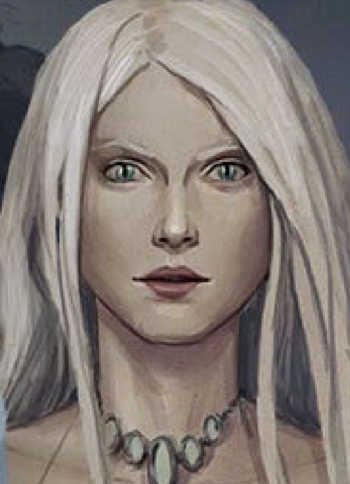 Mortal brute. Whatever your past, whatever your future, know this: I am Mab, and I keep my bargains. Question my given word again, ape, and I will finish freezing the water in your eyes.

The Queen — i.e. the central ruler, more powerful than the Lady but less so than the Mother, as well as the most visible face — of the Winter Court of Faerie. More so than any other high-ranking fae (except perhaps for the Leanandsidhe) she has a tendency to pop up in Harry's life at the very moments he doesn't want her around. Which is pretty much all the time. Her daughter Maeve was the Winter Lady. 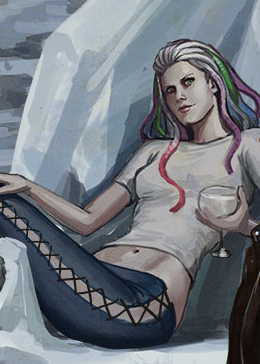 I think it might be wise for you to indulge me. I simply go mad when someone ruins a good party mood.

The Winter Lady, Mab's heir to the title of Queen of Air and Darkness. Kind of a bitch. Twin sister of Sarissa. In Cold Days, it's revealed she had become an agent of Nemesis and refused to be cured of the corruption. She killed Lily and was killed by Karrin Murphy. Her mantle was taken over by Molly Carpenter. 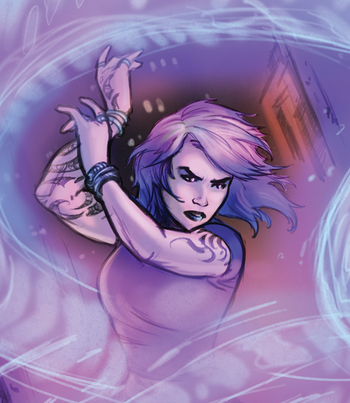 Warlock. Apprentice. Winter Lady.
"Not everyone is so far over the edge they can't come back. Sometimes people just... just get lost. They just need someone to show them how to come back."

Michael and Charity's oldest child, introduced as a wide-eyed preteen who gawked at Harry's every appearance; she soon develops into a rebellious teenager... with a talent for mental and illusion magic. She dresses like a goth and normally has multicolored hair, primarily because it drives Charity crazy. Her "full" name is Margaret Katherine Amanda Carpenter.

As the results of the machinations of the Fae, Molly was turned from reformed warlock to the Faerie Lady of the Winter Court.

Narrates the short stories "Bombshells" and "Cold Case", and the microfiction "The Good People". 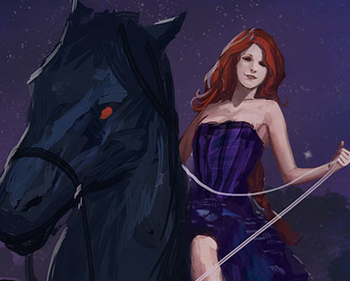 "Spooky, crazy death Sidhe lady."
My godmother was what she was — a being of violence, deceit, and the thirst for power. Her attitudes and reactions could not fairly be called inhumane.

Harry's fairy godmother. The second most powerful being in the Winter Court, next only to Mab. Genuinely cares about Harry, and for a long while tried her best to keep him safe . . . by turning him into a hound. Is strongly suspected to be batshit insane. 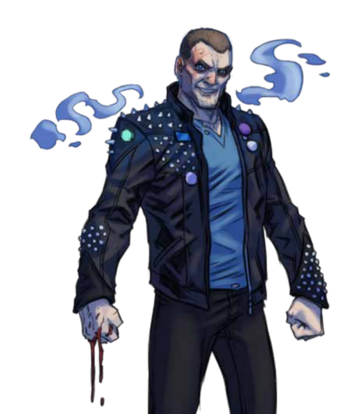 The Winter Knight. Slate is the Winter Queens' personal mortal hitman in Summer Knight. A drug addict, murderer, rapist, and general scumbag, Harry is unsure whether or not those were qualities that got him the job or if he got them from the job. In Summer Knight Slate joined forces with Aurora to get revenge on Maeve, who he had bad blood with. After the events of Summer Knight, Mab kept him prisoner and tortured him endlessly. In Changes, he was finally killed by Harry to take up the mantle.
Other Winter Knights

The many previous Winter Knights who served Mab throughout history. Many are infamous killers known for their sheer brutality and cruelty. They include:

Advertisement:
Eldest Fetch, a.k.a. "The Scarecrow" 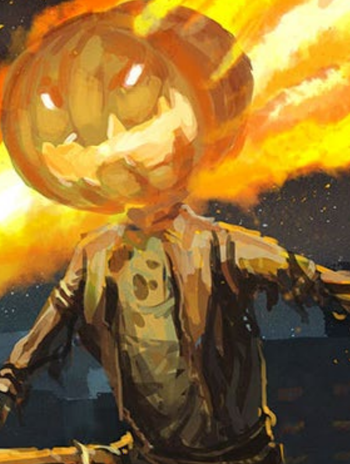 One of Mab's retainers, an old and powerful faerie known as a fetch: a shapeshifting creature that feeds on fear and serves as Winter's enforcers, assassins, and messengers. Most fetches assume forms of creatures or people that their targets fear, i.e. movie horror monsters in the modern era, but these are simply illusionary forms or constructs made of ectoplasm. Eldest Fetch, however, is old enough that he can shape his entire body to resemble the movie monster known as "The Scarecrow": a massive, pumpkin-headed monster made out of old, supernaturally-powerful vines and roots covered in rags. Eldest Fetch is behind the fetch attacks on the horror movie convention in Proven Guilty and kidnapped Molly, though not all is as it seems . . .
Cat Sith

A powerful Malk in the Winter Court. Mab assigns him to be Harry's assistant in Cold Days.

A malk who serves the Winter Queens. He was sent by Maeve to guide Dresden to her presence in Summer Knight, and he speaks for Mab in Small Favor and Changes.

A high-ranking Sidhe of the Winter Court and part of Maeve's entourage. Makes an enemy of Harry at his birthday party and spends the majority of Cold Days trying to kill him for being insulted. He's also Ace's father. 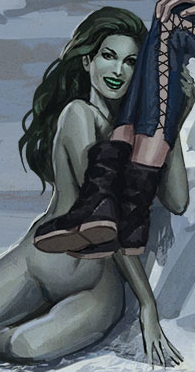 The Jenny Greenteeth of English folkore

, and a nixie who serves Maeve. At Maeve's insistence, she tries to seduce Harry during the Summer Knight case, but fails. Maeve later sent Jenny to destroy the Alphas in revenge for their actions during that same case. However, Billy and Georgia were able to defeat her.

One of the Hidden Peoples of the Winter Court, the Miksani are a group of cormorant-themed spirits who regularly send tribute to Mab. They have had a problem these last few years and as of "Cold Case" Molly must deal with it so Mab gets her tribute. A group of them are based in Unalaska, Alaska, including:

A fae who chauffeurs Leanansidhe and her companions, including Harry and Susan, during Changes. 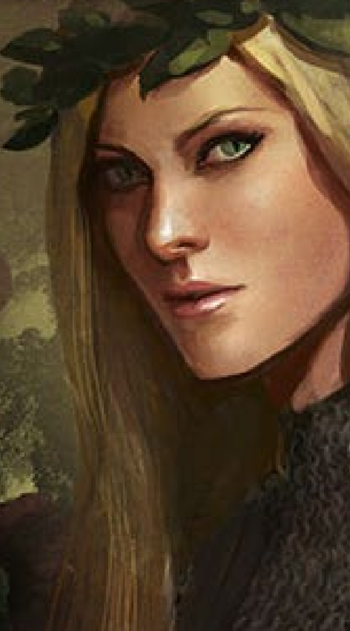 The Summer Queen, who was largely unseen in the story up until Cold Days. She is Mab's sister and opposite. Whereas Mab rules through cold calculations and logic, Titania rules through the wisdom of the heart. This causes problems if her heart is not feeling very wise.
Lady Aurora 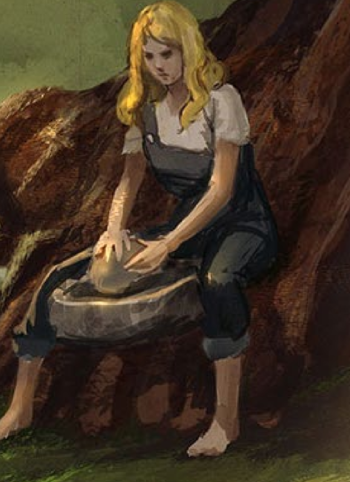 The first Summer Lady, who appeared in Summer Knight. Was the one behind the murder of the Summer Knight, in an effort to give his power to Winter to disrupt the balance between the Courts. 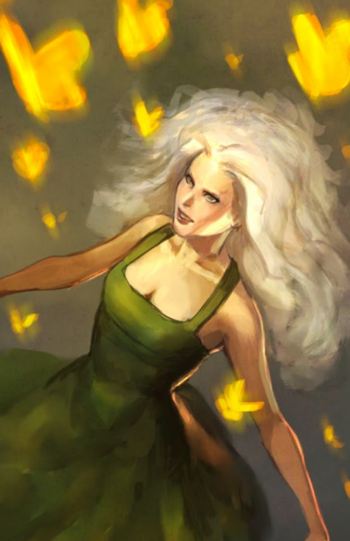 I've been in Winter for a third of my life. I don't trust anyone.

A changeling who rehabilitates Harry after he comes back from the dead, she's actually one of Mab's daughters and the twin sister of Maeve. She becomes the new Summer Lady through Maeve's killing of Lily. 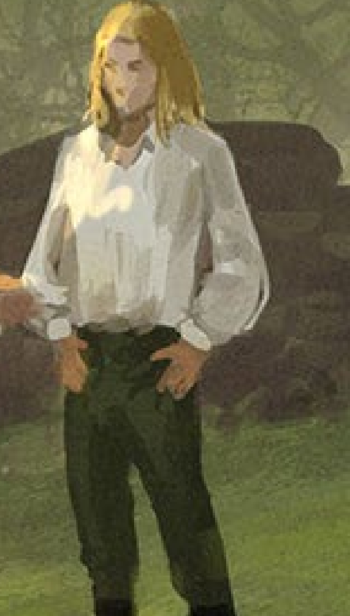 A highly respected artist, the previous Summer Knight and protector of the Changeling kids. His mantle is taken over by Fix, at the end of Summer Knight. 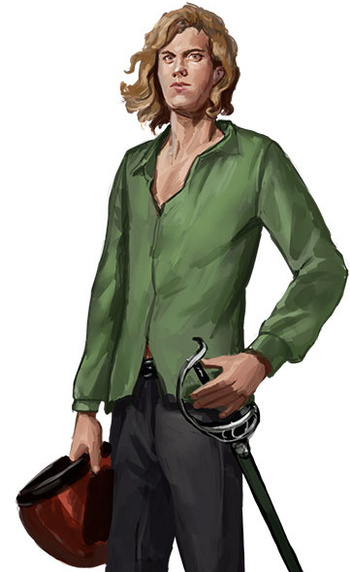 A changeling — a scion of a human and one of the Sidhe — who was friends with the former Summer Knight. Characterized by his meek demeanor and worrisome nature, and doesn't want to get involved in the upcoming war between the Summer and Winter courts in Summer Knight. Becomes the new Summer Knight afterward.
The Billy Goats Gruff 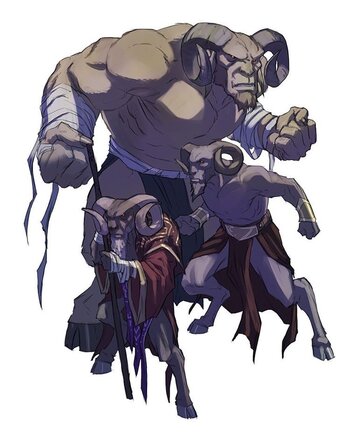 Personal enforcers for the Queen Titania of the Summer Court, they appear to be goatlike humanoid faeries. Consist of a series of brothers who are not just powerful, but very intelligent. Based on the fairy tale of the same name.
Korrick 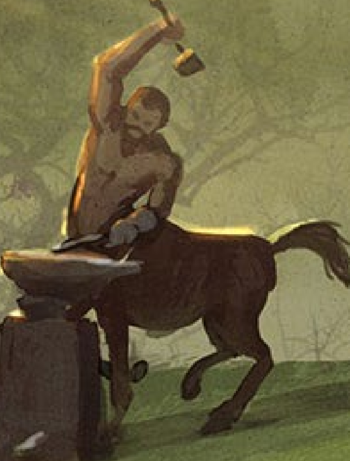 Another of Aurora's supporters. 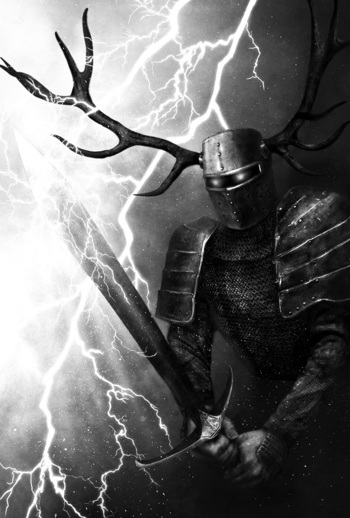 "If I did not release you now, how should I ever have the pleasure of hunting you myself some fine, bright evening?"

A powerful Fae and one of the Kings of Summer

, who leads The Wild Hunt. First encountered in Dead Beat, where, as a result of the plot, he became one of Harry's mortal enemies. He commands the Wyldfae of Summer. 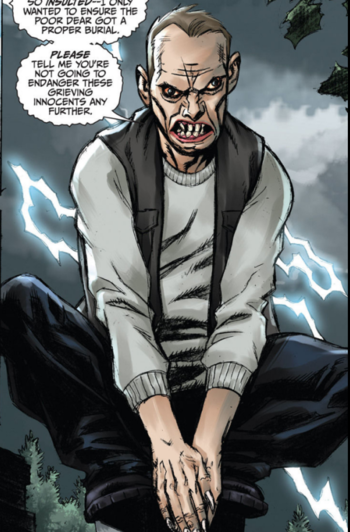 Don't worry. After he murders you, he'll give you an excellent burial.

A goblin who is in a dispute with Ambre, a ghoul. 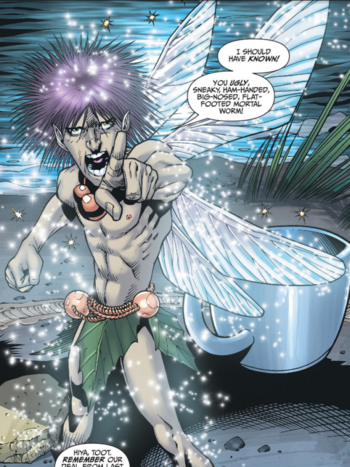 The leader of the Za-Lord's Guard, and he won't let you forget it.

A fairy that Dresden used for information, and later recruited to his personal service by bribing him with pizza. Leader of the Za Lord's Guard. 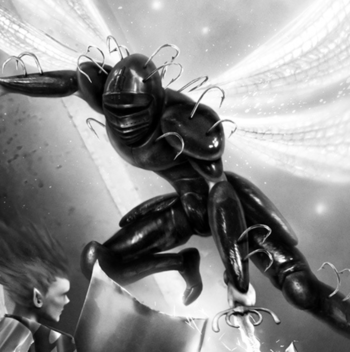 The leader of the Little Folk who harass Harry in Cold Days at Ace's direction. Lacuna is captured by the protagonists, and eventually joins Harry's service by agreeing to be his prisoner of war in exchange for Harry abiding by the Winter Law.

A tiny, ant-sized pixie who guides Dresden through the Undertown in order to repay a favor to Toot-Toot in Summer Knight.

Leader of a group of cobbs based in Shoegasm, a shoe store in Woodfield Mall. Appears in the short story "It's My Birthday, Too". 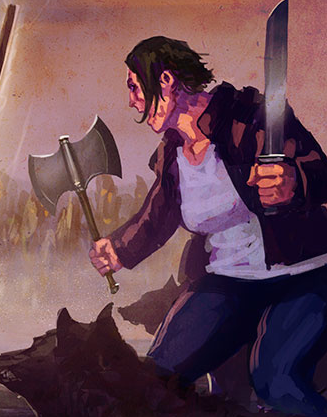 A half-troll, half-human hybrid, Meryl was part of a group of changelings that included Fix, Lily, and Ace. When Lily was captured she did everything she could to rescue her, including Choosing to side with her troll side instead of her human side, and ultimately died saving her life. 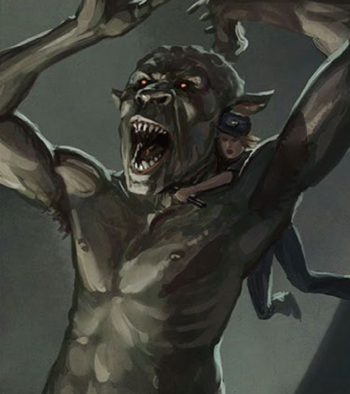 A bridge troll. The first magical enemy Harry Dresden is known to have fought in Chicago. Appears in the short story "A Restoration of Faith".

For Kris Kringle, one of the Kings of Winter, see the entry for Donar Vadderung under Other Powerful Entities.

Gwynn ap Nudd is king of the Tylwyth Teg, a kingdom of Welsh Fey. He first appears in the side story "Curses." He is the one who cursed the Chicago Cubs.

Gigantic monsters that weigh over a quarter ton. Strong, fast, and able to cast some spells, they are very dangerous foes. One appears in the short story "Heorot". 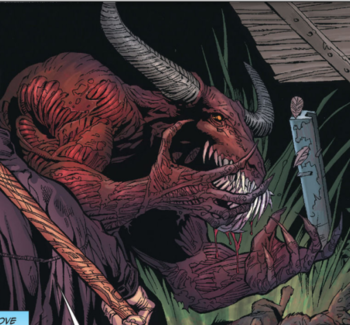 Sometimes the cows fight back.

Large beasts that look like skinless minotaurs and are made from the remains of farm animals that died in slaughterhouses. One appears in Welcome to the Jungle, and a much larger one appears in Cold Days.

A nacken water spirit who finds himself bound to serve Luccio after he loses an ill-conceived bet with her. Appears in A Fistful of Warlocks.

A changeling who appeared in Summer Knight who was friends with Fix, Lily, and Meryl during the events of Summer Knight. He betrayed Harry for protection from the Winter Court and he returns as an antagonist in Cold Days.

Not quite as good a fellow as William Shakespeare would have you believe.

A wyldfae with power to rival the Leanansidhe. He appears in the comic Wild Card.