Characters / The Dresden Files  The Kemmlerites

Characters from The Dresden Files, the Kemmlerites.

Heinrich Kemmler was considered to be the most dangerous wizard who ever lived. An immensely powerful necromancer who spent over a century planning World War I and wreaking havoc in World War II, up until the White Council and every ally they could pull together gathered and killed him for good. His legacy remains, however, in a series of books spreading his knowledge of necromancy, as well as his surviving disciples.

Evil Bob is the dark side of Regular Bob that served Kemmler for centuries just as Regular Bob serves Harry now. While technically not a member of the Kemmlerites, he made his first appearance in the same book as the rest of them, nearly killing Harry in the process. Harry, not wanting someone to gain access to that part of him again, ordered Bob to forget it completely. Naturally, this backfires as Bob, a creature made of living information, took that order as a command to remove that part of himself like a diseased limb. This led to it becoming The Dragon to the Corpsetaker's ghost in Ghost Story. Evil Bob is still out there, last seen locked in combat with his regular self in the Nevernever, and Bob decided to run the moment Harry was clear.

Contenders for the Word of Kemmler

For Cowl, see his entry under The Outsiders.

One of the disciples of mad necromancer Heinrich Kemmler, the Corpsetaker is a necromancer who specializes in mental magic, raising spectres, and using dark magic to allow them to jump between bodies. Violent, savage, and thoroughly insane, albeit hidden behind a thin veneer of affable friendliness. One of the members of the Kemmlerite gang that showed up in Dead Beat to initiate the Darkhallow. When Harry encounters the Corpsetaker, they have stolen the body of a college student named Alicia Nelson. Returns for another round in Ghost Story as "the Grey Ghost," the novel's Big Bad who is stuck as a ghost and intent on coming Back from the Dead. 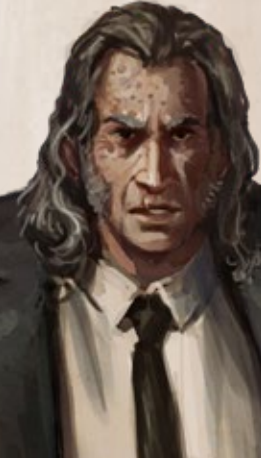 The first of Kemmler's disciples, Grevane is a leathery old man who was Kemmler's "favored" student. Grevane's specialty is in raising large numbers of powerful zombie minions. As in, hundreds of them at a time.

Grevane was also associated with the Thule Society, though it's not clear if he was a member.

Cowl's apprentice/sidekick. Apart from the fact that she's female and a pretty solid Well-Intentioned Extremist, she's almost as much a blank slate as her boss.

The fourth of Nicodemus' usual crew of Denarians, Cassius is a wizard with an emphasis on snakes. Unsurprisingly, takes on the shape of a humanlike snake in his Denarian combat form. At the end of Death Masks, he gives up his coin, as he expects that Nicodemus will help him. He is disappointed, and returns in Dead Beat, working with Grevane under the agreement that the necromancer will help him take down Harry and seize Lasciel's coin.

A ghoul serving under the Corpsetaker, both as her assistant and drummer to control her spectres.