Our hero's semi-loyal pets, his kids and the dirty-minded familiar that lives in his skull. (A skull he owns, anyway.) 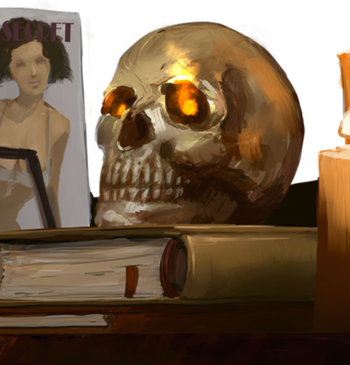 Harry's wiseass spirit of intellect familiar, currently inhabiting a skull after some unspecified, long-ago incident that pissed Mab off at him. Since technology goes haywire around wizards, Harry can't use a computer, which is why he keeps Bob around. Bob knows how valuable he is, and as such Harry has to bribe him with things like trashy romance novels and trips outside his skull to make sure he cooperates. 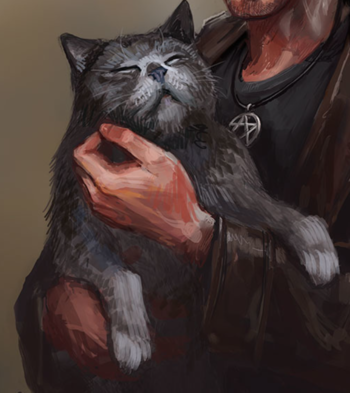 Mister in his natural state.

Harry Dresden's gigantic gray house cat with a missing tail. Mister is a matter-of-fact animal and eats Harry's leftover food whenever possible. He "narrates" the micro-comic "Everything the Light Touches". 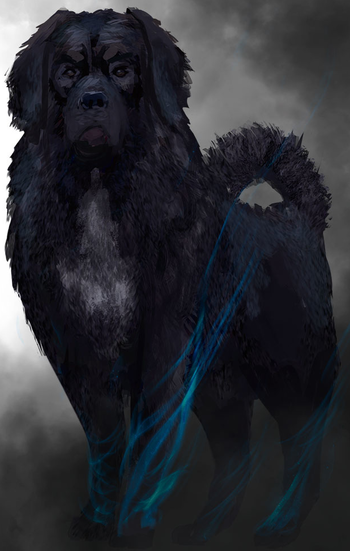 One of Harry's best friends... and most powerful allies.
"Woof."

Harry's dog, acquired accidentally when Harry was hired by a Tibetan monk to retrieve a litter of Tibetan Temple Dog puppies from captivity. Mouse accidentally got left behind, and Harry couldn't get in touch with the monks to return him. Harry named him Mouse because he was small, grey and quiet... and the last line of the book in which he's introduced is, "Why did you buy large-breed puppy chow?" He has since become a good friend to Team Harry, and later picks up guarding Maggie. He narrates the third part of the short story "Zoo Day".

The daughter of Harry and Susan Rodriguez, conceived during Death Masks and was introduced as the Living MacGuffin of Changes. She was kidnapped by Arianna to be used in a sacrificial ritual, but saved by Harry. After living with the Carpenters for a time (due to her father believed to be dead) she and Harry meet at last and form an instant bond and as of Peace Talks now lives with him.

Narrates the second part of the short story "Zoo Day".

Daughter of "Lash" and Dresden, Bonnie is a spiritual entity that had been growing in Harry's head for years. When Lash sacrificed herself in White Night, it was an act described as one of "true selfless love and creation" and led to the creation of their child. Harry identifies her as a "spirit of intellect" possessing the sum knowledge of both Harry and Lash.