Characters / The Dresden Files  The Vampires

Characters from The Dresden Files, the Vampire Courts.

WARNING! Due to the books relying heavily on mystery and surprise, the pages would be virtually unreadable with excessive spoiler tags. Therefore, all spoilers except for the most recent novel (Skin Game) are UNMARKED. Tread carefully.

Vampires take many forms, but they all have two things in common: they were human, once, and they must now feed on the life-force of other humans to sustain themselves. Of course, the Courts don't always get along even among themselves. Predators don't like competition.

There are four Vampire Courts that we know of: The Black Court, of Stoker-esque walking corpses with magical powers, the Red Court, who take the form of Indo-American demons and manipulate mortals with flesh-masks and narcotic saliva, the White Court, beautiful albinos who incite and feed on primal human emotions, such as lust, and the Jade Court. The last of these has only been mentioned once, exists in Asia, and has yet to make an appearance in the series.

, Jade Court vampires rarely act outside of the Yangtze River Valley, do not deal directly with outsiders (instead moving through allies and agents), and are not signatories of the Unseelie Accords, but will act against those who don't treat them with the respect due to signatories. There are also three other types who act mainly in southeast Asia (in the region of South Korea and Thailand), but aren't numerous enough to have organized Courts, instead acting as thugs who run drugs and human slaves through the local seas and sometimes hire out as assassins. They are described as being "mosquitos" in comparison to the four organized vampire Courts. 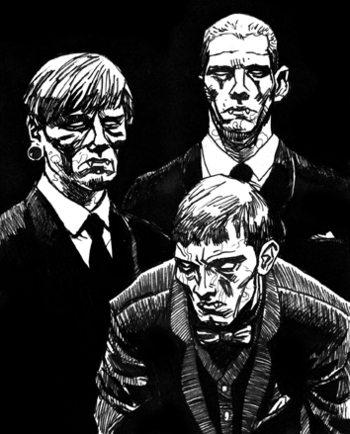 The classic vampire, the Black Court are animated corpses who drink the blood of the living. They are the most innately powerful of the vampire courts, and the most straightforwardly malevolent, but because they have all the traditional vampire weaknesses (Dracula was commissioned by their rivals in the White Court as an expose on them) they are also currently the rarest.

Dracula, in the Dresdenverse, is the most well-known Black Court Vampire, thanks to the publication of Dracula. Less widely known is that he is also the creator of the Black Court.

A very old, very nasty Black Court vampire with a grudge against Harry. So far, she seems to have succeeded fairly well at using him as a pawn in her schemes, and has yet to get her comeuppance; we don't even know what her long-term goal is.

An unattractive nerd who was unpopular even with other nerds, Constance was not happy with her life. She ran away from home and somehow found a member of the Black Court who made her into one of them. Now reborn as the vampire Drulinda, Constance returns to her Live Action Roleplaying (LARP) group to get her revenge.

Humans who have been enthralled by Black Court vampires. Nothing remains of their original personalities; they are essentially puppets and act however their vampire master wishes. 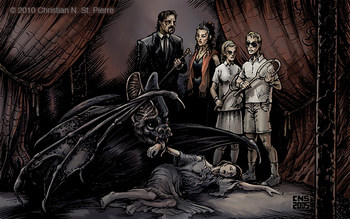 These vampires are demons who can change themselves into (superficially) human forms; like Blacks, Reds feed on blood, but are less supernatural, meaning that both their powers and Weaksauce Weaknesses are less. Because they masterminded a war between the vampire courts and the wizards, they are some of the most visible villains in the series. 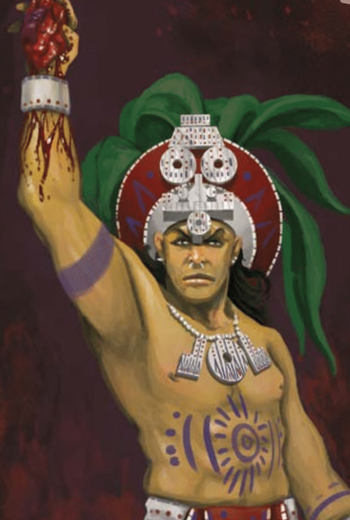 "A god does not converse or bargain with cattle. He uses and dispenses with them as he sees fit."

Absolute lord of the Red Court, his extreme age and the devotion of both his mortal and vampiric minions have allowed him to ascend to a state approximating godhood (and indeed, he was venerated as a god by the Mayans).

Born in Spain at the end of the 15th century and one of Cortez's conquistadors. During his time in South America, he fell in love with a local princess and married her. She turned out to be a Red Court vampire, and turned Paolo into a vampire. Paolo's abilities allowed him to rise through the ranks, and he was a Warlord of the Red Court. 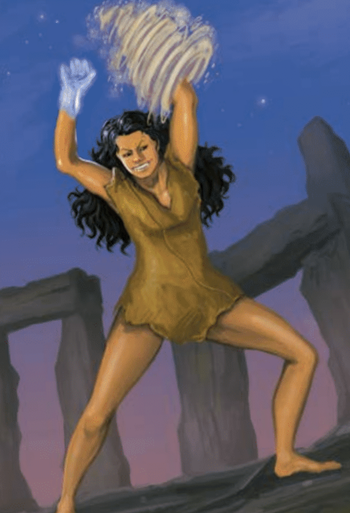 Wife of Paolo, daughter of the Red King, highly placed in the Red Court, and a sorceress.

Bianca in her human form... 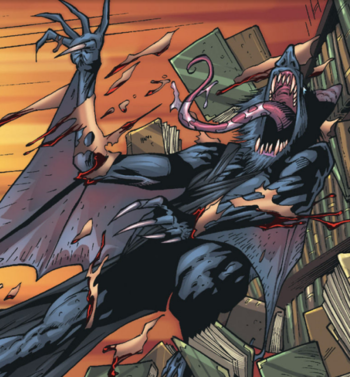 Initially a minor character in the book Storm Front, though her role greatly expanded as the series went on. After Harry's actions indirectly caused her to kill her lover, Bianca enacted a plot of revenge that ultimately started the first magical war in centuries. She's also the vampiric daughter of Paolo Ortega, and the great-granddaughter (in vampire terms anyway) to the Red King.

A Red Court noble and scientist trying to develop artificial methods of creating true love. Unfortunately, her experiments lead to three murder-suicide pacts within a single month, resulting in Dresden and Murphy going after her. Appears in the short story "Love Hurts". 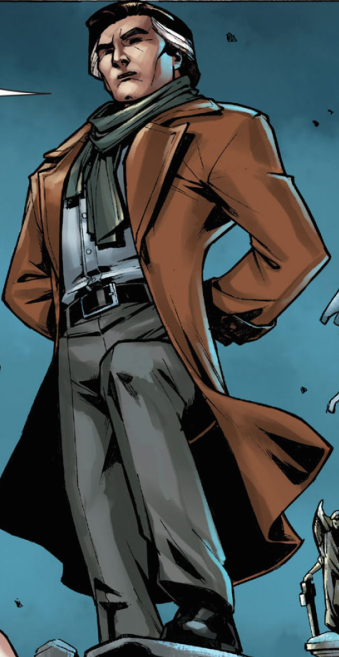 The Red Court's man to take out a Venatori stronghold.
"We only die if we are stupid."

A Red Court noble who led the attack on a Venatori outpost that was guarding a Shoggoth. Appeared in the comic War Cry.

A female vampire who assisted Bravosa during his attack on the Venatori outpost in War Cry.

The Hamilton are a brother-sister team who serve as Bianca's henchmen, running her various "errands" for court business. They appear in Grave Peril.

Esteban and Esmerelda Batiste (the Eebs)

The Batistes, referred to disparagingly as the "Eebs" by Harry, are a pair of highly-skilled Red Court assassins dispatched by the Red King to either kill or capture Harry. They generally pose as a married couple, and have something resembling love and affection for one another.

In retrospect, her choice of girlfriends probably wasn't the best.

One of Bianca's employees at the Red Room. After Dresden wounded Bianca, Bianca accidentally killed Rachel by completely draining her blood, kicking off the conflict between them.

A mortal priestess of the Red King who takes charge of Dresden and his group once they arrive at Chichen Itza. Utterly devoted to her lord. 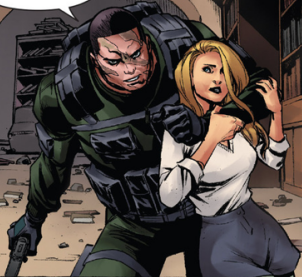 He's the psychopath on the left.

An experienced veteran mercenary who supports the Red Court during their assault on a Venatori Outpost in War Cry.

A Mayan devourer demon under the Eebs' command that's used as their heavy-hitter when normal tactics aren't effective. Harry calls it the Ick due to pronunciation problems. 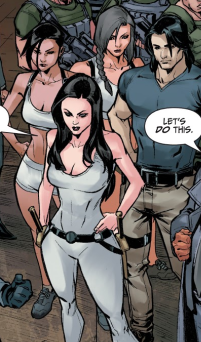 The most human of the vampires, the White Court feed on emotional energy, rather than blood. White Court vampires are born, not made, and they look like eerily beautiful humans. They're immune to most of the traditional vampire weaknesses, but are literally allergic to the opposite emotion they feed off of. (Lust-Love; Fear-Courage; Despair-Hope). Also notable for their cultural Complexity Addiction.

"I've taken thousands like you, lovely child. Taken them and broken them. There was nothing they could do. There is nothing you can do. You were made to feel desire. I was made to use it against you. It is the natural cycle. Life and death. Mating and death. Predator and prey."

The King of the White Court, head of the Raith family. 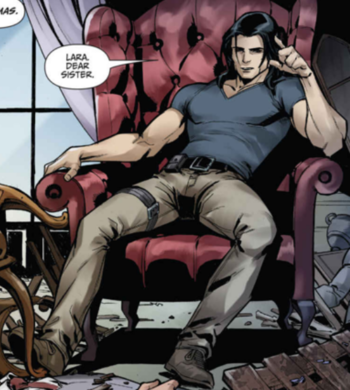 Elegant. Handsome. And the most badass hair stylist you'll ever meet.
"One day, doubtless, the Hunger would gain the upper hand again, and feed and feed until it was the only thing inside and there was nothing left of me. But not today."

A White Court vampire who doesn't want to be. Thomas is one of the White King's youngest children, and the only male one still alive. As an incubus, he feeds on life force, and as a Raith, his preferred emotion is lust. While the vampirism means he can occasionally manage feats of enormous badassery, afterward he gets very hungry, and that can easily kill the food source. For years, his primary "meal" was Justine, but when he almost killed her he finally got fed up (so to speak) with the usually incubus order of business and decided to try to break out of it. 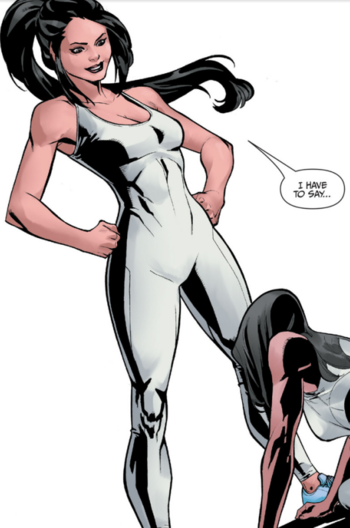 The queen of the succubi.
"At what point did you forget that I am a vampire, Dresden? A monster. A habitually neat, polite, civil, and efficient monster."

White Court vampire, older half-sister of Thomas Raith through their father the White King. Noted as the most powerful of her sisters, if not the most beautiful (no, really). As a succubus, she feeds on life force, and as a Raith, her preferred emotion is lust. After the events of Blood Rites, she unofficially became acting head of the Raith family; her father the White King is now merely her puppet. Also a member of the Venatori and a participant in the Oblivion War.

When acting, she uses the stage name Lara Romany.

One of Thomas and Lara's cousins, Madrigal prefers to feed off fear instead of lust. He masquerades as the horror movie director Darby Crane. Harry first meets him in Proven Guilty, when he tries to sell Harry to his enemies on eBay.

Twin sister to Madrigal and cousin of Thomas and Lara. Vapid and not particularly bright, Madeleine has little restraint and aggressive appetites.

A member of the White Court acting as the contact between Murphy's group and the Court. She tries to steal from Murphy and gets thoroughly rebuffed.

A member of the White Court who took part in the battle against Shagnasty. 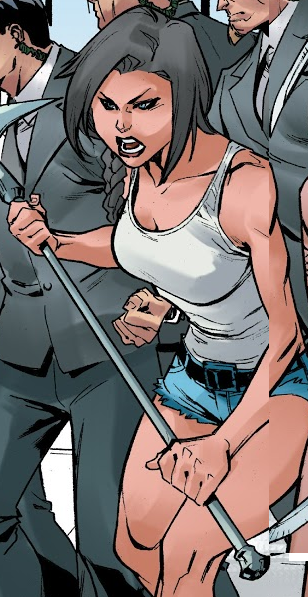 A member of the White Court who took part in the battle against Shagnasty.

A minor member of the White Court who works as a public prosecutor's assistant. Appears in the story Jury Duty. 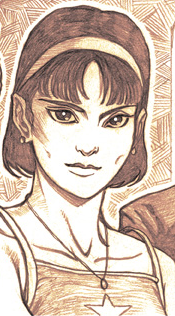 The baby sister of Lara and Thomas and the apple of Lord Raith's eye, who's been kept in the dark about her heritage.

A scion of House Malvora, a White Court noble house that favors feeding off fear.

The leader of House Malvora.

A White Court vampire who attempts to terrify a little girl and feed off her fear, only to be stopped by Hamilton Luther.

The leader of House Skavis.

A Serial Killer of female practitioners, intending on discrediting the White Council. He disguised himself as a woman named Priscilla. 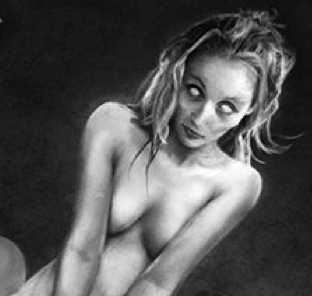 An unknowing White Court Virgin who fell in love with Irwin Pounder. Irwin was strong enough to survive their first sexual encounter, resulting in Connie awakening as a full vampire but not killing her man.

The father of Connie Barrowill, a White Court vampire who was willing to go to extreme lengths to make sure his daughter awakened as a full vampire. 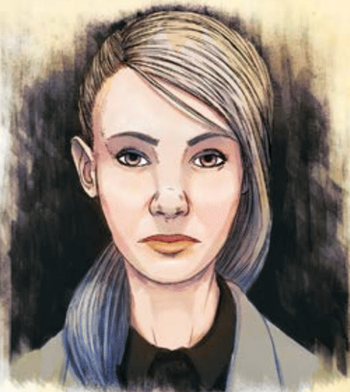 Thomas Raith's long-time girlfriend and primary food source. After he almost killed her in Blood Rites, she was in a wheelchair for a while, got out of it, her previously dark hair turned white, and, ironically, she and Thomas could no longer touch since love burns White Court vampires. Largely due to this last characteristic, she is now Lara Raith's personal assistant, since Lara prefers to have an assistant that none of her family members can turn into a thrall.

Madrigal Raith's lawyer. Glau was actually a jann, and he assisted Raith outside of the courtroom as well, even helping to sell Dresden on eBay.

The manager of a dummy corporation called Windfall which belongs to Lara Raith.

A lawyer at the law firm of Smith, Cohen, and Mackelroy. First seen in Turn Coat. She is enthralled by Madeline to spy on Dresden, which led to her hiring Vince Graver to do the job.

A mercenary assigned as the "babysitter" of Tania Raith when she went up against Dresden. He followed her orders, but also had the authority to pull the plug on the operation once Dresden took the upper hand.

The first woman who bore a child for Lord Raith.

Victims of the skinwalker

Victims of the skinwalker

Security guards who were maimed when the skinwalker nicknamed "Shagnasty" attacked Lara Raith's mansion. They include:

All three were killed when injured White Court Vampires drained them to recover their health.