Characters / The Dresden Files  The Fomor

Characters from The Dresden Files, the Fomor.

Daughter of Balor, Ethniu is the last Titan in existence. She is worshipped and served by King Corb, and seems to be directing his acts of increasing hostility towards other Accords members.

In General
Old enemies of both the Summer and Winter Fae who were banished out to sea, and are one of the supernatural powers that re-emerged at the end of Changes. They are a hodgepodge of many monsters and pantheons driven into the sea and now adapted to aquatic life. Word of God hints that they are featured in some of H.P. Lovecraft's writings.
King Corb

The ruler of the Fomor.

A Fomor who collected the minor talents and hedge wizards of Chicago after the Red Court's collapse. Was taken down by Murphy and the Alphas. 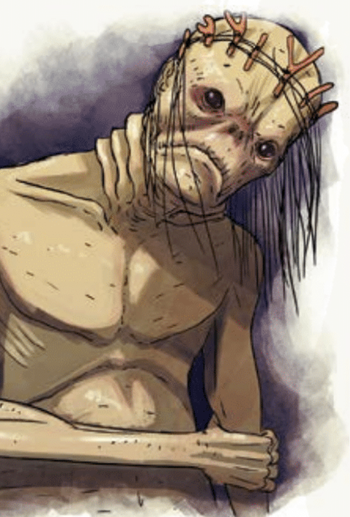 A Fomor sorcerer who was robbed by Justine and who pursued her, ultimately battling John Marcone when he opted to protect her and the baby Justine had rescued from Mag's care.

Mag's brother, who planned to gas a treaty signing between the Fomor and the svartalves; Marcone was attending the signing, and Froggy wanted to kill him in revenge for Mag's death. His plans went awry, however, when witch Molly Carpenter and werewolf Andi Macklin intervened. Froggy might be the Formor known as Omogh mentioned in "Ghost Story".

A Jotun whom Dresden tangles with during the assault on Chicago.

A servant of Frogface in charge of collecting minor talents from around Chicago.

A servant of Omogh. He acted as a messenger between him and Corpsetaker. He also served Froggy during the attempted gassing of the treaty signing with the Svartalves.

A mysterious figure who helps Frogface during his efforts to gather up the minor talents of Chicago.