Characters from The Dresden Files, the Chicago Mafia.

. . . and for war
"One day, probably soon, you'll get yourself killed thanks to that irrational set of compulsions you call a conscience, long before my name tops your list. I needn't lift a finger. Giving you information seems an excellent way to accelerate that process. It will also tax the resources of my enemies. And . . . I believe I have no objection to contributing against any organization that would victimize children so."

The boss of the Chicago criminal underground, he's not quite as unpopular with the cops as one might expect since he runs his operation with the minimum of bloodshed and the maximum of profit. He's smart enough that he generally tries to keep Harry on his side, but isn't averse to working against him when necessary. Harry hates his guts, but he has still probably done him more good than harm overall, even as the two men recognize that they will eventually come into a situation where only one will be left standing.

Recently became the first mortal signatory to the Accords, and in doing so became the Baron of Chicago. And even more recently, he's taken up the Denarius of the Fallen Angel Thorned Namshiel, and is now a rogue Denarian.

Narrated the short story "Even Hand". 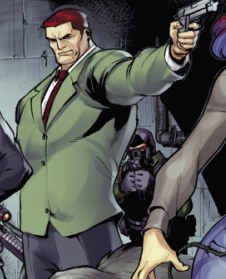 "He might disapprove of killing, but he did it thoroughly."

The ax is not just for show.

A mercenary in the employ of Monoc Industries who is hired by Marcone as a security consultant. Gard is exceptionally skilled with ancient medieval weaponry and armor, often seen with a broadsword or large axe and a big steel shield. Which only fits, as she is one of the Valkyries.

In General
Marcone's heavy hitters. Their job description is, literally, to find trouble and shoot it.
Mr. Childs

Described by Murphy as Marcone's number-one killer, Childs is a dangerous man. He represents Marcone to the loose alliance of powers opposing the Fomor in Chicago, and is empowered to make deals and even trade Marcone's territory for favors when warranted.

A little woman who appeared to be terrified of Ray, an abusive man who was the superintendent of the property she lived in. She gave Murphy some information on an investigation after Murphy dealt with Ray. However, she ultimately turned out to be one of Marcone's troubleshooters who was in the process of dealing with unsanctioned drug-dealing operations in Chicago which were being supported by Ray.

In General
The original Velvet Room was a brothel owned by Bianca St. Claire, but Marcone acquires it after Dresden burned it down. The mob boss later reopened it as a high-end brothel under the guise of a health fitness club called Executive Priority Health.
Helen Beckitt, aka Ms. Demeter

For revenge on Marcone, she'd brave any fire.

First appeared in Storm Front as a distraught woman who lost her only daughter to mob violence. Broken from that act of violence, she wanted revenge and went up against Harry Dresden when she and her husband helped Victor Sells used magic to kill. After getting out of prison for drug dealing, Marcone offered her a job in compensation for her pain. She is now Marcone's girlfriend as well as the madame of the reborn Velvet Room, a high-end brothel in the guise of an expensive health club called Executive Priority Health.

One of the prostitutes at the reborn Velvet Room, and a personal friend of the boss, Ms. Demeter.

An employee who welcomes Dresden and Murphy to the Velvet Room when they visit it during the White Night case.

An employee who welcomes Dresden and Thomas to the Velvet Room when they visit it during the Small Favor case. 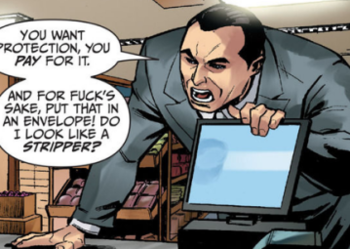 A thug who collects protection money for Marcone. Appears in the comic miniseries Wild Card.

One of Marcone's soldiers who retired and went straight. After he beats a White Court vampire to death for trying to assault a little girl, the White Court tries to have him jailed. Marcone arranges for Harry Dresden to learn about the case and save Luther.

One of Marcone's sub-lieutenants who was involved in the drug-dealing side of his operation. Tries to take over after Marcone vanished during the Small Favor case, and fails.

A former carny who learned how to swallow an impressive variety of objects and who later used that talent as a smuggler of small but pricey items. His murder kicked off Dresden's investigations into the Kemmlerites around Chicago.

One of Marcone's hired guns.

One of Marcone's high-ranking hired guns. 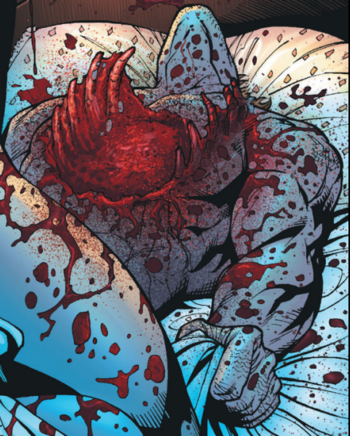 Marcone's bodyguard, and another hired gun. 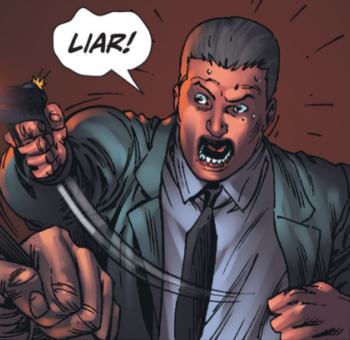 One of Marcone's thugs, but not for long.

Marcone's bodyguard. He ultimately betrays his employer for Victor Sells.

In General
Marcone offers a service for Chicago-area residents: in exchange for monthly payments, he will place them under his protection and battle anyone—including supernatural powers, though not all his clients know that—who seek to do his clients harm.
Samuel Fogle 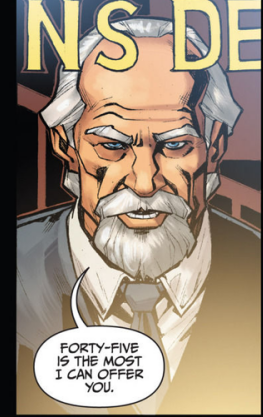 His goods came cheap. So did his life.

A pawnbroker who pays for Marcone's protection, though it doesn't do him any good when the sewer sorcerer sends a golem at him. 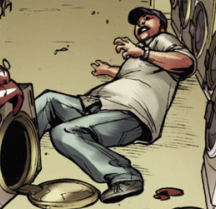 He paid for protection. He didn't get it.

Another small businessman who is one of Marcone's clients, and is killed by a sorcerer seeking to demonstrate his own power. 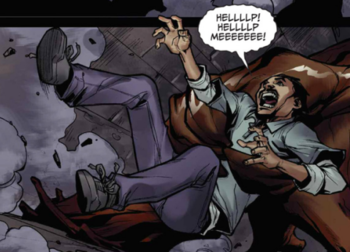 Most people never learn about the ancient tunnels beneath Chicago. Halligan isn't so lucky.

The third man attacked by the sewer sorcerer, and the first to be taken alive. He is held hostage by the sorcerer, who plans to infect him with a substance that will spawn more golems and then turn him free.

One of Marcone's many 'satisfied' customers.