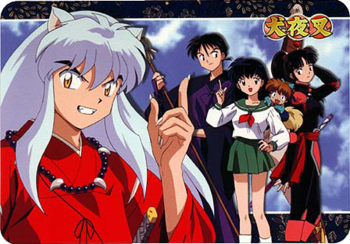 Inuyasha is an enormously popular manga and anime series by Rumiko Takahashi. The manga was serialized from 1996 to 2008 in Shonen Sunday, while the anime ran for 167 episodes on Nippon TV from 2000 to 2004. Adult Swim aired the final episode of a very decent English-language dub in October 2006 and continued to air it in the very early Sunday morning slot almost continuously (the only other show to have run longer on [as] is Cowboy Bebop) until 2014. In Canada, the dub aired on YTV where it was one of the channel's most popular anime shows. Inuyasha and several other supporting characters from the show appear in the Massive Multiplayer Crossover game Sunday VS Magazine: Shuuketsu! Choujou Daikessen.

Kagome happens to be the reincarnation of Kikyo, the miko that Inuyasha once loved fifty years in his past, who just happened to be the one who fired a sacred arrow which sealed him to a sacred tree and essentially killed him. Kagome's arrival in the past is pivotal in that she is the one who releases Inuyasha from this "death" by pulling the arrow from his chest; her connection with Kiyko allows her to perform this otherwise impossible feat.

The small-scale structure of the story is episodic, with many a Monster of the Week (usually literally a monster). However, in addition to the romance angle between Inuyasha and Kagome, there is an overarching plot about the pair and their adventuring companions — Shippo, an orphaned, mischievous and immature kitsune; Miroku, a cunning Buddhist monk with wandering hands and a ticking time bomb in his right hand in particular; Sango, the latest (plus unfortunately and very recently the last) of a renowned clan of demon slayers, whose signature weapon is a gigantic boomerang made of demon bones; and Kirara, Sango's nekomata companion, who can change from an adorable two tailed kitten to an enormous flying sabretooth at the drop of a hat — wandering pseudo-medieval-Japan in order to collect the pieces of the shattered Shikon no Tama/Jewel of Four Souls. This quest eventually turns into a struggle against the Big Bad — the evil incarnate that is Naraku, a human-turned-youkai that seeks the Shikon Jewel in order to taint it and become a full-fledged youkai with powers far beyond anything any youkai has ever known, and whose plotting turns out to be behind just about all of the miseries that have befallen every main character.

And, just to throw some family drama into the mix, on occasion the heroes also have to deal with Inuyasha's elder half-brother Sesshomaru: a full blooded youkai who already looks down on his younger brother for his human blood, and outright despises him when it turns out their long dead father left one of his cool swords, Tessaiga, to his hanyō son rather than his 'rightful heir'. Sesshomaru instead inherited the blade known as Tenseiga, which he regards as a gross insult since the sword can't even hurt a living creature, instead being able to restore the dead to life. While at first he's determined to take Tessaiga for himself and kill Inuyasha should he get in his way, Sesshomaru later seeks a weapon to prove he is equal to, or even greater than, his father...and eventually, as the brothers repeatedly clash with each other, battle the enemies their father left in his wake and amass both power and crucial character development from the hard lessons he prepared for them, Sesshomaru and his entourage also get drawn into the end goal of taking down Naraku.

Over the course of the series, Inuyasha and company confront Naraku several times, but each time he gets away, gaining more shards of the Jewel — and an extra power or two — in the process. Forcing Inuyasha to gain a new power as well just to ward off Naraku's attacks. Rise, rinse, and repeat till its conclusion.

The original manga eventually reaches a resolution, but it takes its sweet time to do so (fifty-six books when the main plot would really need only, say, twenty), and the first anime was Cut Short with no proper ending due in large part to actually catching up with the production of the manga and running out of episodal stories to do. The 26-episode anime series Inuyasha: The Final Act picks up where the original anime left off and covers the remaining chapters of the manga through to the story's conclusion.

You can find dubbed and subtitled versions of both Inuyasha

on Hulu and the first two seasons of the original series on Netflix. The show (in dubbed form) aired from 2002-2014 (over a decade!) on Adult Swim (and, later, the revived Toonami block, which aired The Final Act from 2014-2015), becoming one of the first big hits for the block, and the series is now considered a classic gateway anime series for many in the US. In 2020, the first 54 episodes and four movies became available on Funimation.

In 2011, a loose Chinese Live-Action Adaptation called The Holy Pearl was made.

In May 2020 it was announced the series would be getting an anime sequel titled Yashahime: Princess Half-Demon with the main characters being half-demon twins Towa and Setsuna, the daughters of Sesshomaru, alongside Moroha, the daughter of Inuyasha and Kagome.