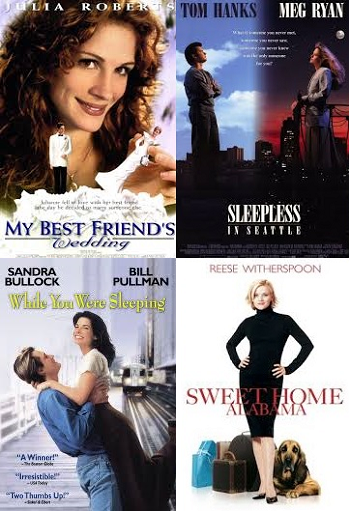 Romantic comedy, aka "rom-com", is a genre in which the development of a romance leads to comic situations.

Since all it says on the tin is "love" and "laughs", the genre provides large meadows for the screenwriters to frolic in. Many writers have pushed and blurred the lines of romantic comedy.

Many rom-coms use a set of certain tropes. Many feature two more or less equal protagonists with one slightly more equal than the other. The story may start with one character being dumped/divorced/widowed. His/her friends and family urge him/her to find someone. The protagonist may agree to go on several blind dates. At some point, they meet our second protagonist. Usually, the second character isn't an obvious match for the first; maybe she's wild and crazy and he's a CPA. Or he's rich and she's poor. A romantic comedy usually provides a victory of love against all odds. A certain amount of overlap with Dramedy is not unusual. Romantic comedies in more recent years have made a concerted effort to subvert some parts of the genre where possible, present the story in a more down to earth or certainly less light and fluffy manner, add raunchier humor, more flawed characters and occasionally elements of self-deprecation, but in most of them there remains a large degree of audience-understood foregone conclusion.

Every story needs a conflict, and since rom-coms are driven by the quest for love, the conflict derives from the obstacles to the quest. This could be the apparent incompatibility of the leads: mutual Love at First Sight is rare. The two characters will spend a good part of the movie fighting their obvious attraction. Eventually, they'll realize they're perfect for each other. Or, something will pop up; maybe a Three's Company kind of misunderstanding, or a revelation in the third act about one of them lying. One of the two characters will storm off in a huff. Or the couple is already married for some reason, and the conflict comes partially from different expectations and misunderstandings.

The climax of a rom-com requires the satisfactory recognition of love: the other chases after the love interest and does something really romantic to win them back. The reconciliation scene ends with the two characters reunited in a romantic embrace. Often ends in a wedding.

Tropes typically employed in a romantic comedy are covered in:

See also Romance Arc, Rule of Romantic, and compare with the Bromantic Comedy. Often overlaps with Harem Genre, though those are not always comedic.