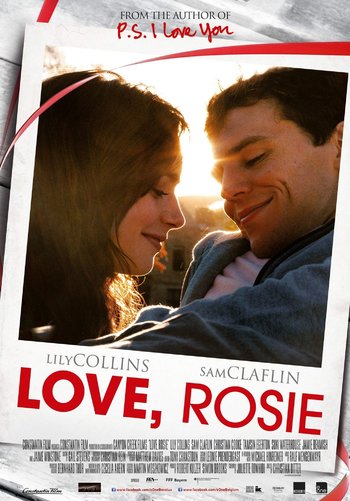 "We just keep missing each other. Maybe we're just not meant to be."
"No matter where you are or what you're doing, or who you're with, I will always honestly, truly, completely love you."
— Rosie
Advertisement:

Love, Rosie is a 2014 romantic dramedy directed by Christian Ditter, adapted from the 2004 novel Where Rainbows End by Cecilia Ahern.

Rosie (Lily Collins) and Alex (Sam Claflin) have been best friends for as long as they can remember and plan to go to college in Boston together. Alex kisses Rosie on her 18th birthday; however, she is too drunk to remember it and Alex misconstrues her statement as wanting to stay Just Friends. Rosie gets pregnant by a classmate and decides to keep the baby without telling Alex, who goes on to Harvard without her. As the years go by, Alex and Rosie's devotion to each other, and their nebulous, never-addressed feelings, are tested by several complications.