Josuke's father, who conceived him in an affair with Tomoko when she was in college. See Joseph Joestar.
Tomoko Higashikata

Josuke's mother, who is deeply in love with Joseph. She's rather normal, being as good of a parent as she can to Josuke.

Josuke's grandfather. A police officer who served in Morioh for 35 years. A jokester who is somewhat neglectful of his duties, but genuinely eager to help his community. Gets killed by Anjuro. 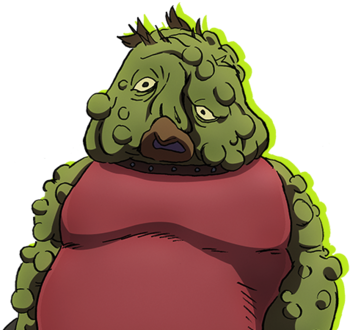 The father of the Nijimura brothers. The loss of their mother and the family's descent into poverty made him abusive, but his financial problems were solved by joining DIO's henchmen. However, the flesh bud implant that came with this ran wild upon DIO's death, causing him to mutate into a monstrous form that would impair his intelligence and ability to speak, all while healing any wounds instantly. Keicho subsequently searches for a means to end his father's miserable life. 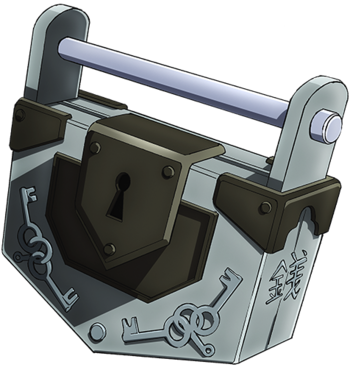 A local thug who shakes down people for money by using his Stand, The Lock, which places a heavy padlock on a target's heart that amplifies feelings of guilt. After his defeat at the hands of Koichi and his newly awakened Stand, he ceases his criminal activities and helps the party from time to time.

His Stand, The Lock, is named after The Rock, a song from the The Who's rock opera Quadrophenia.

A bully at Josuke and Koichi's high school. He uses his Stand, Surface, to alter a life-size wooden mannequin into an exact double of someone. If the Surface-doppelganger makes eye contact with whoever it's imitating, the real person will be locked into copying the mannequin's movements.

His Stand, Surface, is named after the band of the same name.

"That said, what attracts me to a man, more than anything else, is potential! And you are potential personified!"

A beautiful classmate of Koichi's who falls deeply in love with him due to his pure heart and potential. Her Stand, Love Deluxe (named after the eponymous Sade album), makes her hair prehensile. 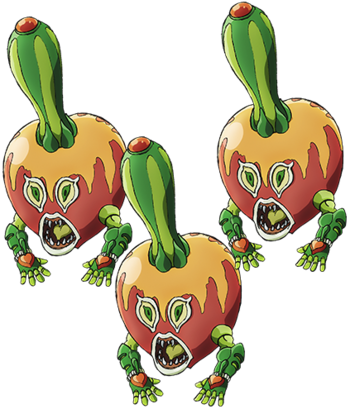 An Italian chef who sets up shop in Morioh. Shortly into his time there, the heroes learn he is also a Stand user, though he turns out to be a benevolent man. His Stand, Pearl Jam, allows his dishes to correct poor health, though to do so, he needs to understand their conditions, and cook food designed to help them.

He is named after the Trussardi

fashion brand, while his Stand is named after the rock band Pearl Jam. 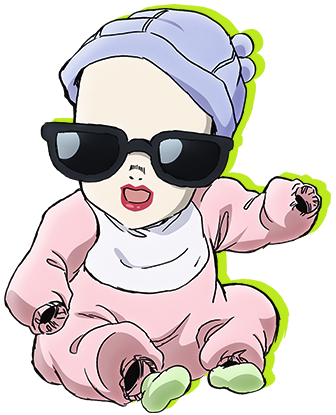 An invisible baby found by Josuke Higashikata and Joseph Joestar. Her Stand ability, "Achtung Baby", allows her to turn her and anything at short range invisible.

Her Stand is named after the U2 album Achtung Baby. 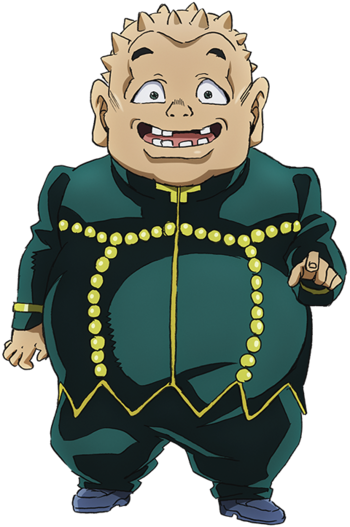 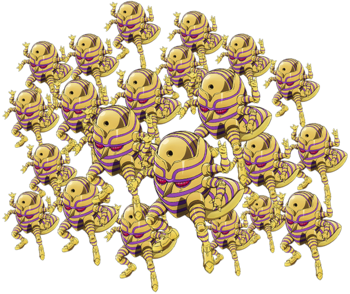 Harvest is named after the album of the same name 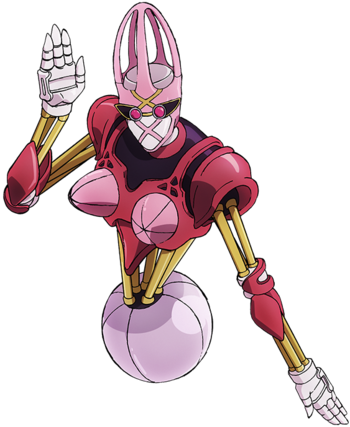 The manager and chief beautician of the Cinderella spa. Aya considers herself the fairy godmother of any woman who wanders into her salon, and uses her stand, Cinderella, to temporarily alter these women's appearance in a way that will magically attract luck and love.

Cinderella is named after the Hair Metal group Cinderella

A young man who claims to ("probably") be an alien. His "Stand" is Earth Wind and Fire, which allows him to shapeshift into almost anything.

His ability is named after the R&B/Disco group Earth, Wind & Fire.

A biker gang Japanese Delinquent whose good looks and charismatic charm has earned him the adoration of three women. His Stand is the Life Drain-causing Highway Star, capable of sustaining speeds up to 60 kilometers per hour without tiring and dividing into a swarm of footprints to drastically increase its durability.

His Stand is named after the song "Highway Star" by Deep Purple.

A seemingly ordinary man, who turns out to be a Stand-wielding Serial Killer. See Yoshikage Kira.
Anjuro "Angelo" Katagiri 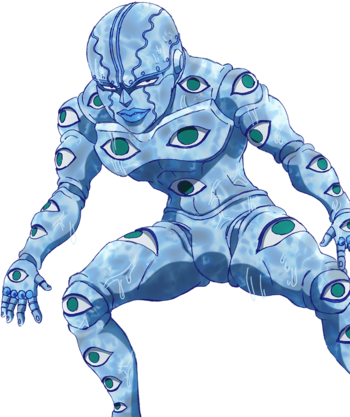 A serial killer and the first villain of the story. Carries the Stand Aqua Necklace, who can travel through any liquid body and kill people from their insides.

Aqua Necklace is named after the album Aqua by Asia. 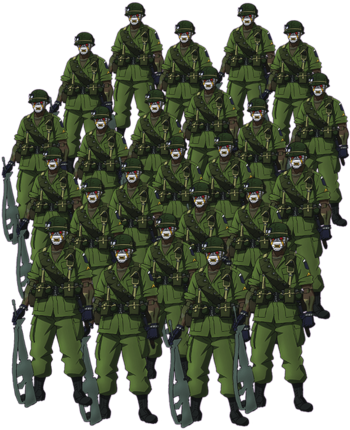 Brother of Okuyasu Nijimura and wielder of the Stand Bad Company, an army of miniature soldiers, toy-sized helicopters, and tanks who deal a lot of damage.

His Stand is named after the band Bad Company. 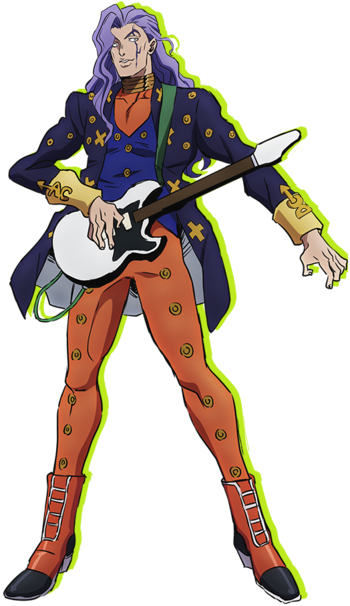 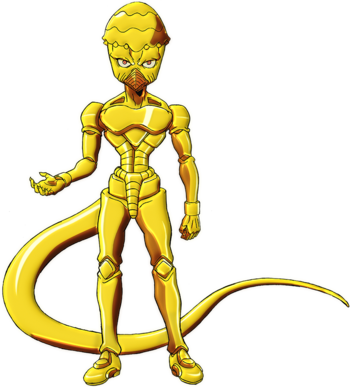 A rock guitarist who wants to chase Jotaro out of Morioh and later tries to kill Joseph as he fears that Joseph's Hermit Purple might reveal his identity. He wields the Stand Red Hot Chili Pepper, who can travel through electrical currents and become stronger by absorbing electricity.

His Stand is named after the Alternative Rock band the Red Hot Chili Peppers.

"Bug-Eaten" and an Unnamed Rat 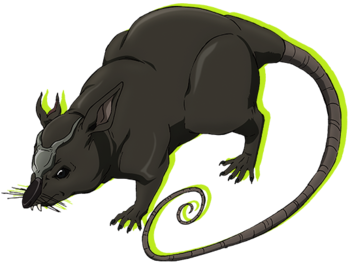 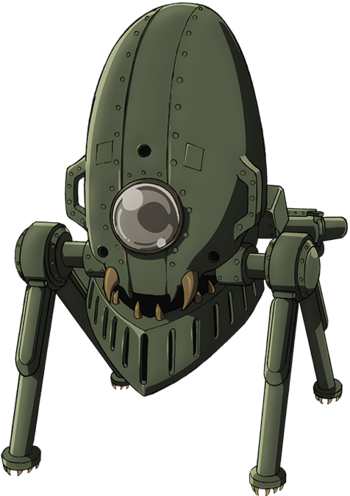 Two rats who were pierced with the Stand arrow, granting them both the Stand Ratt. Jotaro nicknames one of them "Bug-eaten" due to one of its ears having a large chunk missing. Ratt resembles a small turret-like robot and fires toxic barbs, which melt anything they hit into a sort of blood gelatin for the rats to eat later.

Their Stand is named after the rock band Ratt. 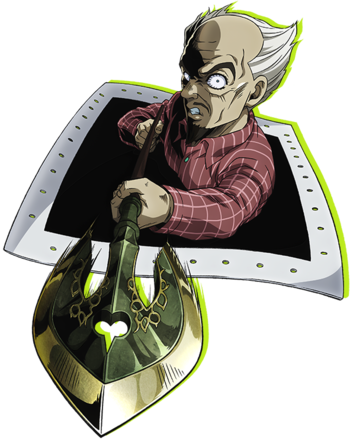 Yoshikage's father, who died before the events of the story. His Stand, Atom Heart Father, allows him to live on inside of photographs, and manipulate anything within what the photograph contains.

His Stand is named after the Pink Floyd album Atom Heart Mother and/or its title track. 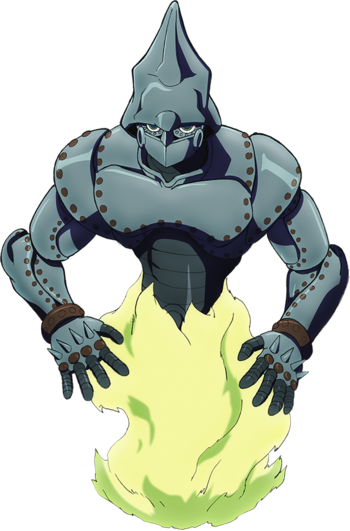 Also called "the Rock–Paper–Scissors kid". A young admirer of Rohan Kishibe who also wants to challenge him to a RPS duel. He wields the Stand Boy II Man, who can drain the energy of another Stand user by playing a Rock Paper Scissors game and winning it. 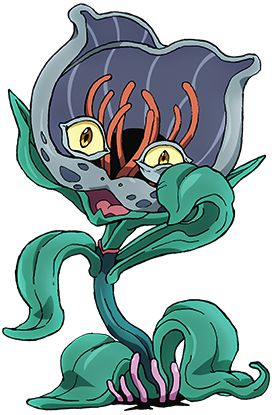 Once a normal British Blue cat, he was hit with an Arrow and found his way into the basement of the Kawajiri house, where he was accidentally killed in a scuffle with Shinobu. After Kira buried him in the garden, he was reborn as a strange, animal-like plant with the Stand Stray Cat, which allows him to compress air into "bubbles" and shoot them at deadly velocity.

Due to the ambiguous nature between Stand and user, he is mainly referred to as "Stray Cat" after his revival. Stray Cat is named after the rockabilly band the Stray Cats.

A hermit living a lonesome life in an old, retired telephone tower. His Stand is Super Fly, a completely autonomous Stand bound to the tower, which reflects all damage done to it in the form of blasts of energy and traps the last person to leave it within its boundaries.

His Stand is named after Super Fly, more accurately after the soundtrack album by Curtis Mayfield.

A man obsessed with fear. Wields the Stand Enigma, which allows Miyamoto to turn targets into pieces of paper if he can successfully identify their fear-based Character Tics.

His Stand is named after the German New Age project Enigma. 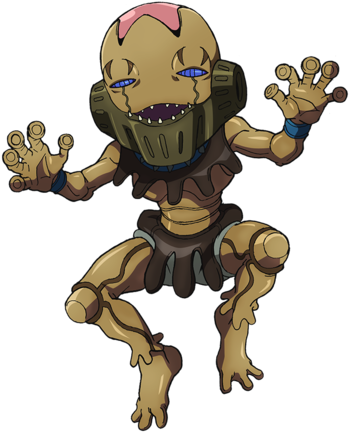 A quiet and timid, yet greedy architect. He unwillingly holds Cheap Trick, an independent Stand who whispers in the wielder's ear that anyone who sees his back will die; the person who sees the back of Cheap Trick's user becomes the new host to Cheap Trick.

Cheap Trick is named after the band of the same name.

A young delinquent who saves Josuke's life when he was four years old.

Morioh's radio DJ. Apparently, Okuyasu and Kira are fans, as they've both written into his program.