This is the sheet for the characters from the spinoffs set in the JoJo universe. This includes only the works which Araki himself created.

Under Execution, Under Jailbreak 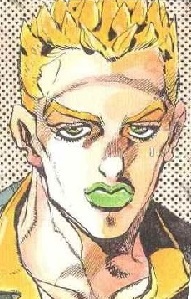 A man sentenced to death after murdering a young girl who stole from him.
Advertisement:

Dolce and His Master 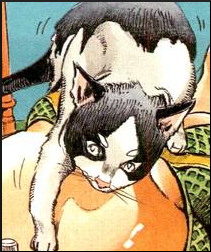 A British bicolor cat. Both he and his owner gets trapped in a yacht in the middle of the Ocean.
Ayashi Masago 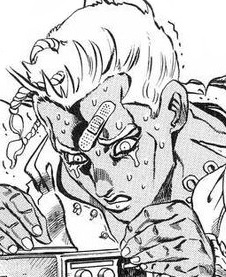 A young first class architect who owns the yacht.
Advertisement:

Voiced by: Hiroki Takahashi
A 24-year old corn company worker who went to the church to confess for a sin he committed.
Vagabond

Voiced by: Shouto Kashii
An Asian man who hadn't eaten anything in 5 days and was desperate for food. 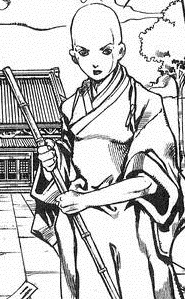 A female Buddhist monk who hires the ghost of Yoshikage Kira to take care of other ghostly problems in Morioh. 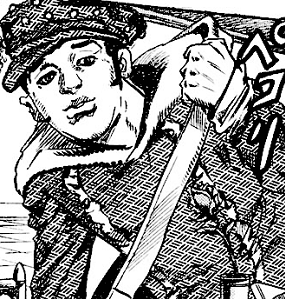 Voiced by: Takamasa Mogi
Rohan Kishibe's manga editor who's in his first year of the job.

Voiced by: Mai Nakahara
Played by: Marie Iitoyo
Rohan's new editor at Shueisha. She wants to buy a house in a village fabled to bring good luck to those allowed to enter it.
Ikkyu 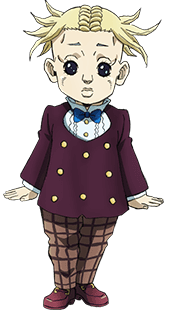 Voiced by: Kaori Mizuhashi
Played by: Kaede Shibasaki
A butler at the so-called Millionaire's Village who resembles a child.
Gods of the Mountain

Gods of the Mountain

Mythical beings who have both blessed and cursed the Millionaire's Village. 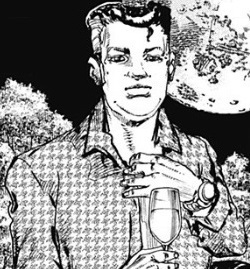 The Mochizuki patriarch, who is worried that his family is cursed and one member will die during the night of the Mid-Autumn Festival if they do not all spend the night together and participate in the moon viewing.
Haruko

Noboru's wife. Noboru is worried about her because he has just learned she has been diagnosed with cervical cancer, spurring the interest in the family curse.
Aki 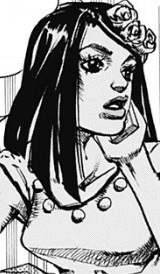 The elder daughter of the family. She really does not want to stay at home for the moon viewing, as she had plans to meet up with her boyfriend. She is also deathly afraid of being stung by a hornet, having become allergic to one the last time she was stung. She later sneaks out when the rest of her family is asleep to meet up with her boyfriend, drawing the Moon Rabbit to her to try to kill her. She is saved at the last moment when her boyfriend proposes to her, effectively taking her out of the Mochizuki family and freeing her from the curse.
Takeru 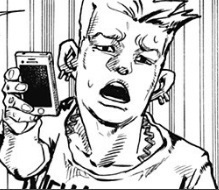 The younger son of the Mochizuki family. He too wished to spend time with friends rather than with his family as he is trying to get a baseball scholarship into high school, but he gets into the swing of things when he has the idea to bring the electronics outside.
Mitsu 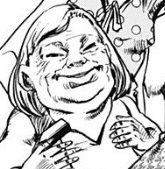 Noboru's elderly mother. She nearly dies during the moon viewing due to a freak accident involving Takeru's remote control car and the family goldfish flying into her mouth while she's sleeping, but she manages to cough up the goldfish and survives one more year.
Moon Rabbit 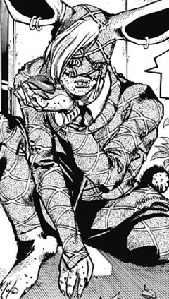 A humanoid rabbit spirit responsible for the curse on the Mochizuki family should one of them not take part in the moon viewing. He appears from the moon when Aki leaves her sleeping family behind to meet her boyfriend and tries to kill her with a hornet sting, but her boyfriend proposes to her, freeing her from the curse as she will no longer be a Mochizuki.

Voiced by: Koki Uchiyama
A man obsessed with exercise. To the point of killing anyone who interferes with his strength training. Who just so happens to be an avatar of the god of muscles, Hermes.