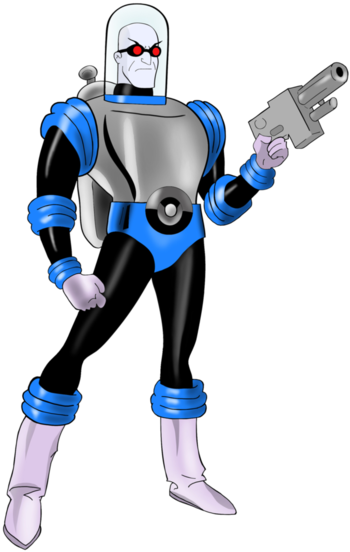 "It would move me to tears… if I still had tears to shed."
Click here to see his first redesign

"Ironic, isn't it? After all I did to keep my wife whole, I end up like this. You now understand why I could not return to my Nora. There's no hope for me… or you and your city. Everyone's going to feel my loss."
Voiced by: Michael Ansara
Appearances: Batman: The Animated Series | Batman And Mister Freeze Subzero | The New Batman Adventures | Batman Beyond

"Think of it, Batman: to never again walk on a summer's day with a hot wind in your face, and a warm hand to hold. Oh yes, I'd kill for that."

A respected cryogenics expert who was once employed by GothCorp, Victor Fries fell into a life of crime when his wife, Nora, grew ill and he was forced to sustain her in cryogenic containment until such time that a cure could be delivered. A freak accident in his lab caused Victor to become doused in cryogenic freezing compound, altering his body's structure. Although the effect of the incident made him very durable physically (he is nigh-immortal as his body's low temperature reduces his aging to a crawl), it left him unable to sustain himself outside of below-freezing temperatures. Fries developed a special suit that allows him to exist at these temperatures in normal climates, becoming "Mr. Freeze" in the process. Mr. Freeze's criminal activities are typically unconcerned with personal gain but instead motivated by vengeance and desperation. 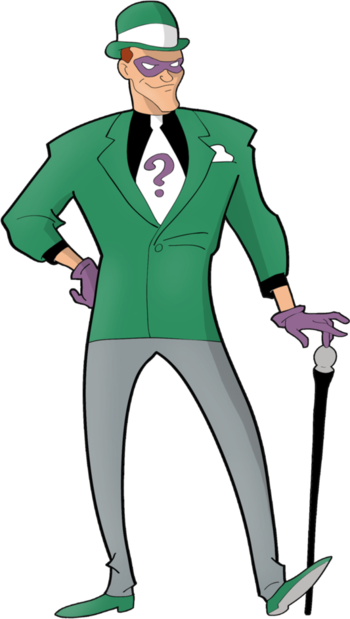 "Do you know what happens to gate crashers? They have to match wits with the Riddler."

A disgraced video game developer-turned-criminal with a knack for very complex and obscure riddles. Unlike most of Batman's rogues, The Riddler typically wants Batman to pursue him as it gives him an opportunity to use his riddling skills to try to outwit the Dark Knight. 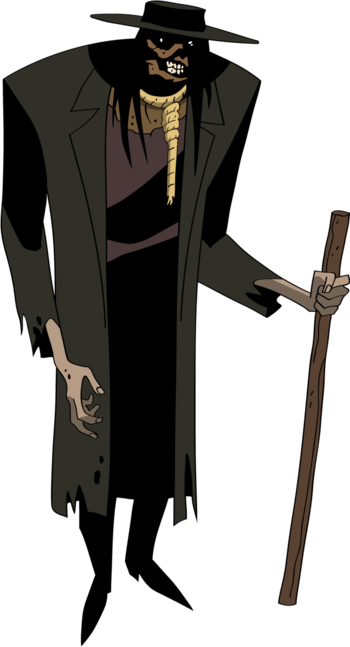 "Fear is the glue that holds society together. It's what makes people suppress their worst impulses. Fear... is power."

A university psychology professor who has made a career out of studying fear and its effects. In his pursuit of research, he developed a chemical toxin that allows him to induce fear in any subject at his whim, which he later began using as an asset for crime.

"You're mighty in Gotham, Batman, but in Wonderland, the Mad Hatter reigns supreme!"
Click here to see his redesign

The Mad Hatter: I'm crushed. You don't like the fantasy world I've created for you?
Bruce Wayne: It's not real.
The Mad Hatter: Are you the dreamer or merely part of someone's dream? That was just the question Tweedledee put to Alice in Through the-
Bruce Wayne: This isn't some silly storybook!
The Mad Hatter: But it is. It's a beautiful story. You have love, wealth, a family. All you ever wanted. Your own private Wonderland.

A Wayne Enterprises researcher specializing in neurology and with the technological skill to create circuitry capable of controlling the brain. Obsessed from a young age with Lewis Carroll's Alice in Wonderland, the Mad Hatter is always looking for an "Alice" of his own, and primarily uses his hypnotic skills in his crimes. 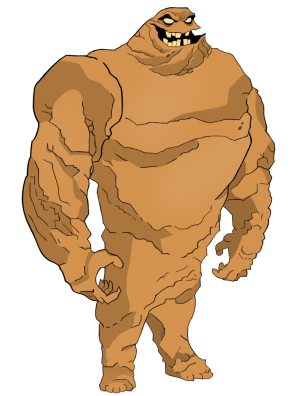 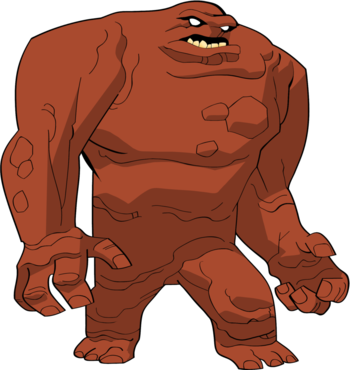 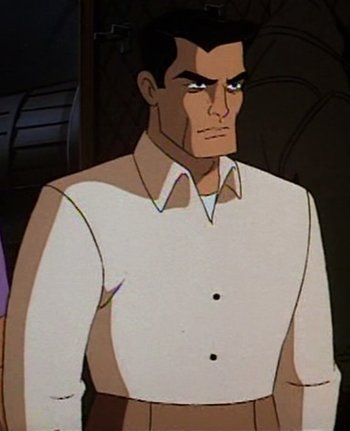 An actor indebted to Roland Daggett in exchange for a supply of "Renuyu", a formula that is able to remold facial features, which Hagen relied on to mask the damage done to his face following a bad accident. When Daggett wanted to end their "business relationship" on less-than-amicable terms, his hired muscle attempted to kill Hagen by over-exposing him to Renuyu. However the effect of the substance wound up changing him into a shapeshifting monster. 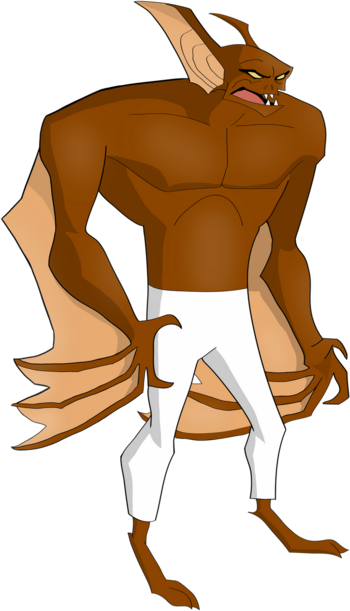 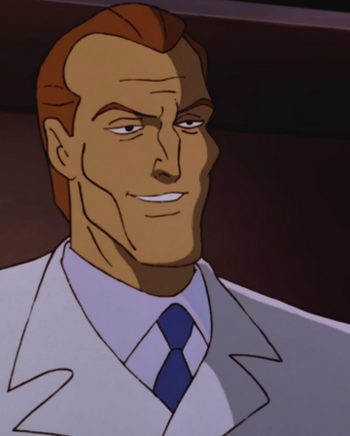 The Man-Bat was a creature resulting from crossing of human and bat DNA. 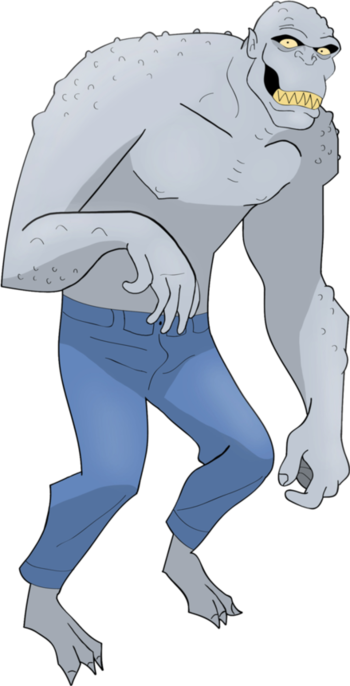 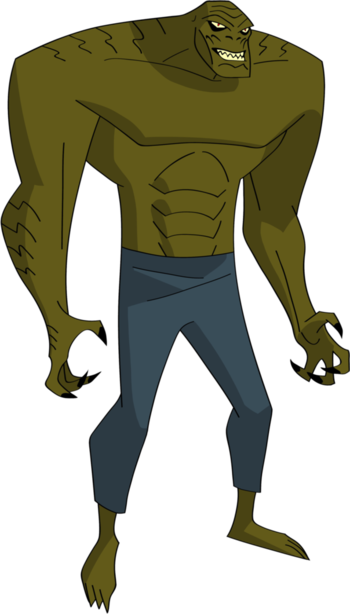 "When you grow up lookin' like I do, you gotta learn to go with the flow."

Killer Croc was a deformed criminal with crocodilian attributes, who ran afoul of Batman.

"Who you talking to, creep? He's just the hired help. I'm the boss here. You talk to me."
Click here to see his redesign

Voiced by: George Dzundza
Appearances: Batman: The Animated Series | The New Batman Adventures
The Catwoman: What's wrong, Ventriloquist? Cat got your tongue?
The Ventriloquist: Please, I never hurt you. Scarface, he's another person. Not me, really.
The Catwoman: But he's inside you somewhere. And I'm going to keep scratching until I find him.

Arnold Wesker was a Ventriloquist who had Dissociative Identity Disorder. Unwittingly, Wesker developed a criminal mastermind personality which was vented through the dummy named Scarface.

Scarface: ''Come on, what are you waiting for? For once in your life, do something right.''
The Ventriloquist: Yes. (He then shoots Scarface).
Scarface: ''That's it, dummy, when I get my hands on...''
(Later)...
Arnold Wesker: And Mr. Wayne even gave me my job back.
Mrs. Segar: I'm so glad, Arnie. Maybe now that you're back... you won't be such a stranger this time. Use the rec room. Sometimes it helps to be around others.
Arnold Wesker: I will. But for right now... I'm just looking forward to being by myself. 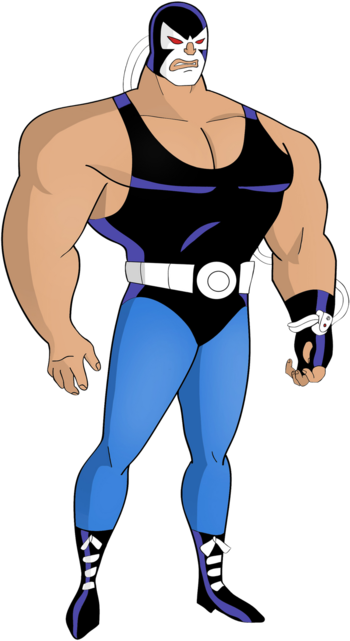 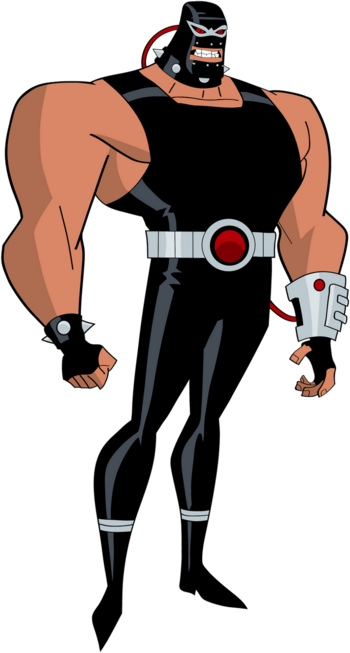 "You cannot do this to me! I am invincible! I AM BANE!"

Bane was a chemically-boosted assassin, and a nemesis of Batman.

"When it comes to clocks, I am king."
Voiced by: Alan Rachins
Appearances: Batman: The Animated Series | Justice League Unlimited

"Well, well. The Batman. It's about time you showed up. I suppose you want to know why I've brought downtown Gotham to a standstill, Batman. Well, let's just say it's because I'm a civic-minded citizen with a lot of time on his hands."

Temple Fugate, also known as the Clock King, was an efficiency expert with a grudge against Mayor Hill. 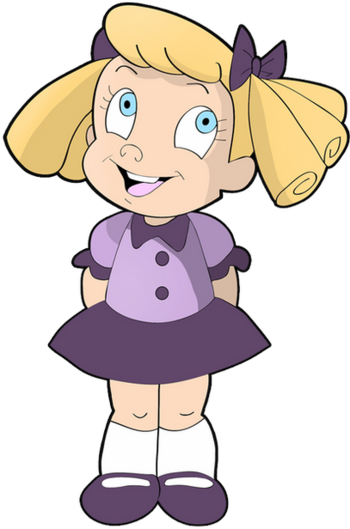 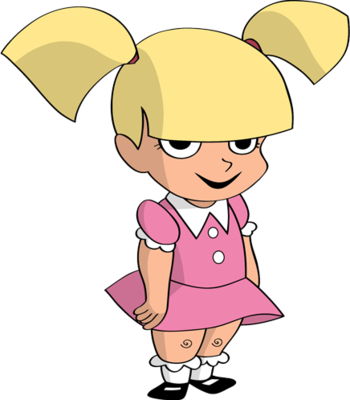 "I didn't mean to..."
An ex-actress with a medical condition that basically froze her physical development at age five, Baby Doll turned to villainy in an attempt to relive her glory days.
Firefly 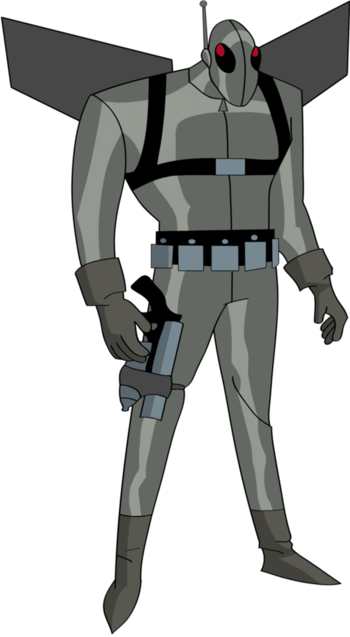 Garfield Lynns was a concert pyrotechnician who worked for a popular singer named Cassidy. After being spurned by her, he sabotaged the pyrotechnics at one of her shows and reinvented himself as the pyromaniac supervillain Firefly as he stalked Cassidy. 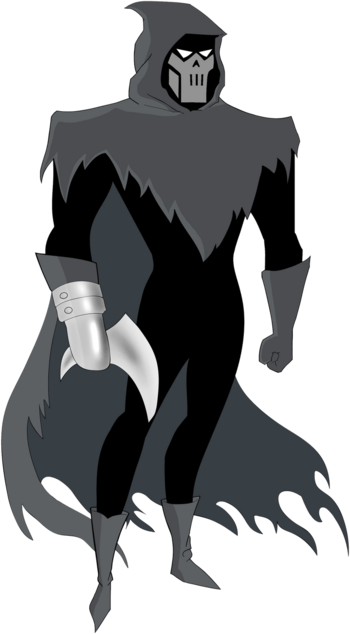 "Your Angel of Death awaits."

A thrill-seeking criminal who is a former stuntwoman and a dangerously avid adrenaline junkie. 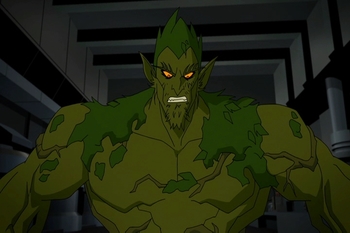 A exiled dryad from another dimension who detests humanity. Jason plans to transform all living things on Earth into plants by any means necessary.