Characters / One Piece: Impel Down 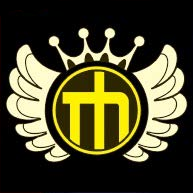 "You're nothing but pirates and rebels who became notorious for your wicked deeds!! Were you allowed to roam the seas again, law-abiding citizens would live in such fear for their loved ones that they couldn't sleep at night!! This prison was constructed as a warehouse for scum like you so that decent people could live in peace!! If you were to get out, you'd terrorize the world!! But I'm not going to allow that to happen!!"
Hannyabal (Chapter 543)
Advertisement:

Also known as the "Underwater Prison" or the "Great Prison", Impel Down is the World Government's prison for all kinds of criminals and pirates. Imagine a fusion between Alcatraz and the "Inferno" of The Divine Comedy and you get the idea.

The prison is divided into six levels, each signified by a number. The higher the number, the deeper the level extends underwater. The bounties of the prisoners scale linearly with the prison level. Each level has its own methods of torture:

open/close all folders
Tropes Pertaining to Impel Down 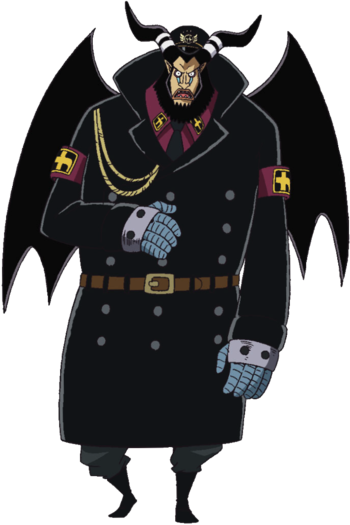 "Never forget that I have both the power and the authority to execute all of you right here and now!"
—Chapter 531

Magellan is the chief warden of Impel Down, the most feared and impenetrable prison/dungeon in the One Piece world. As such, he is a very imposing man with a very stern, business-like manner. Even when things get out of hand, he keeps up his professional manner, inspiring hope and admiration in much of the prison staff. Forms a bit of an Odd Couple with Under-Warden Hannyabal, a Crouching Moron, Hidden Badass Starscream, who, despite his eccentricities, Magellan endorses as his successor.

Magellan has the power of poison, granted by the Venom-Venom Fruit (Doku Doku no Mi), and is consequently one of the most dangerous fighters in the story. He can cover himself and others with poisonous corrosive slime, and emit poison gas (which he's able to breathe without issue). The effects of his poison can manifest themselves in a variety of ways, from blinding tear gas to paralyzing neurotoxins. As a side effect, Magellan has taken a liking to actually ingesting poison, and while it can't kill him, it gives him severe bowel troubles, forcing him to spend much of his time relieving himself. After the Impel Down arc, he gets beaten to an inch of his life and has to be hospitalized and sedated to prevent him from killing himself. He eventually gets over it, but is still demoted to Under Warden during the Time Skip, much to his dismay.

Easily one of the greatest examples of The Starscream in manga and anime, Hannyabal is the overly ambitious under-warden of Impel Down. He appears to be a tall man with a pot-belly and a massive chin, wearing a pharaoh's headress. His continuous Freudian Slips about his desire to become Warden and silly antics often gain the ire of Magellan, who either Dope Slaps him, or outright poisons him in anger. Despite his finding him irritating and too ambitious, Magellan considers Hannyabal as his only worthy successor to Chief Warden of Impel Down.

As of the timeskip, he achieves his dream as he is now the Warden of Impel Down with former Jail Head, Domino, as his number two.

One of Impel Down's high officers. She's serious and strict, to the point of scolding Magellan, the chief warden, for spending too much time in the washroom.

She greets Hancock during her visit in the prison (actually a way for Luffy to sneak in) until she's petrified by her Devil Fruit power. After going back to normal, she doesn't remember being turned into stone and accomanies Boa Hancock to Magellan's office.

During the timeskip she's promoted to head jailer, a post left vacant after Shilew's arrest. 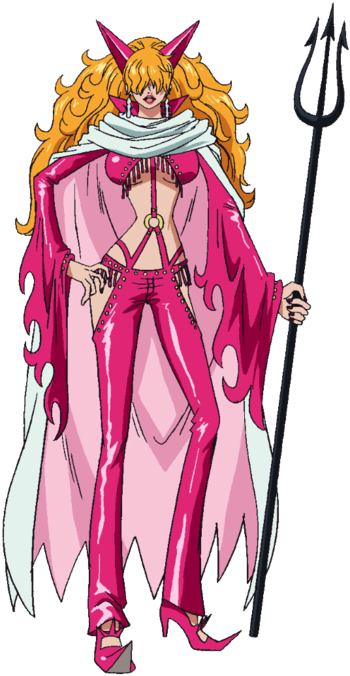 The Security Chief of Impel Down and the one in command of the Jailer Beasts. She's a sadistic person who enjoys hearing the screams of her enemies (and even of her allies) and, fittingly for her sadist personality, she has a pitchfork with a concealed whip as a weapon of choice. She has a crush on Magellan.

When Luffy infiltrates Impel Down, she sends Minotaurus to stop him and is later assigned to guard Level 5's entrance. After Luffy, Ivankov, Jimbei, and Crocodile escape from Level 6 and defeat the Jailer Beasts, she angrily attacks them and fights Ivankov, who manages to tie her up using her own whip.

Captain of the Guard Saldeath 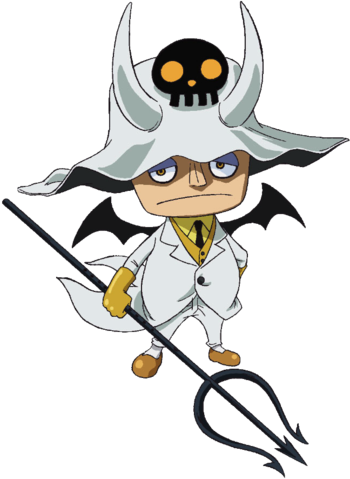 "Give up. Resistance is futile. You're trapped in an undersea escape-proof prison. You never had a chance. But you should be glad that I captured you, because the floor under this is patrolled by four roaming jailer beasts."
—Chapter 530

One of the chief guards of Impel Down and the one in command of the Blugori of Level 1. He's a calm and level-headed person and is probably the least brutal of all the high ranked officers. He doesn't fight on his own but controls the Blugori using his flute.

During Luffy's infiltration, he tries to stop him in Level 3, but since the Blugori are easily defeated by him, he's sent to quell the riot in Level 2. After Luffy escapes again, Hannyabal sends him to Level 4 but he and his Blugori are defeated by Ivankov with a single blow.

After the timeskip, he has grown proportionately taller.

Other Guards and Beasts

Four (five after the timeskip) strong guards under Sadi's authority. They have all eaten an unknown Zoan Devil Fruit and have awakened their power, giving them a strong healing factor that allows them to recover quickly.

Despite their dumb-looking appearance, they're all brutal guards who would gladly smash any rioting prisoners with their weapon, though they also have a big fear of Sadi.

Due to their great stamina and healing factor, they face Luffy and his allies multiple times (especially Minotaurus), but they always get defeated and, once Jimbei, Crocodile and Ivankov join Luffy in the escape, they basically stop being a threat.

After the time-skip, a fifth jailer beast, Minochihuahua, joins them.

Tropes pertaining to all of them: 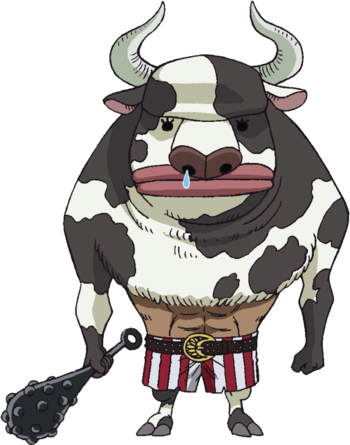 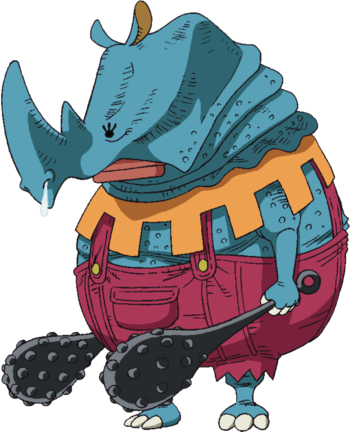 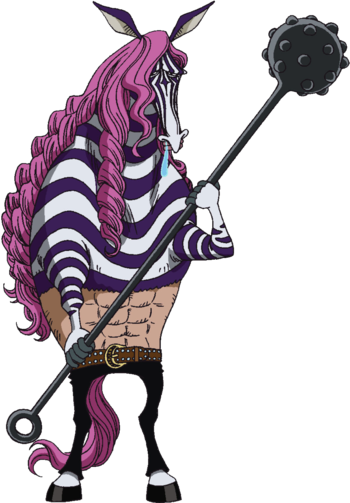 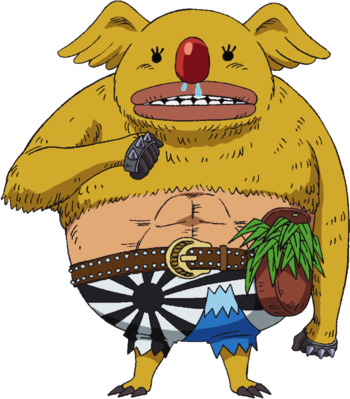 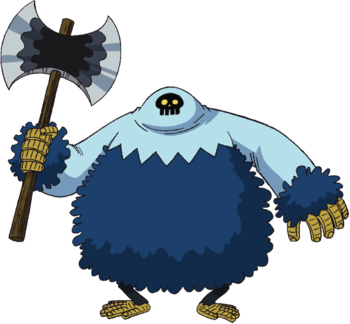 The Blue Gorillas, nicknamed Blugori, are animals so strong that they hunt Sea Kings for food. They mainly reside on Level 1, where they chase the prisoners, but can move to the other levels as well, though they aren't much of a threat to higher-ranked prisoners. They are under Saldeath's command, who controls them using a flute. 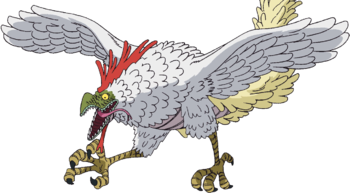 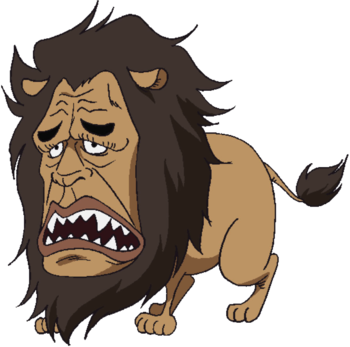 Level 2, known as "Wild Beast Hell", is filled with dangerous monsters that will chase and eat every prisoner they encounter. The monsters in question are: 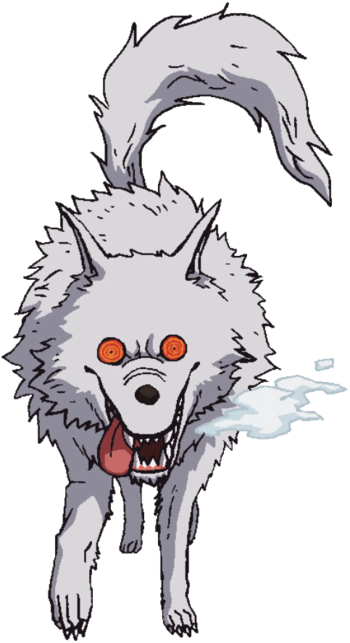 A pack of vicious wolves that reside in Level 5. It used to be in Level 2 but, since the wolves are so voracious that they used to prey on the other beasts too, it has been moved. 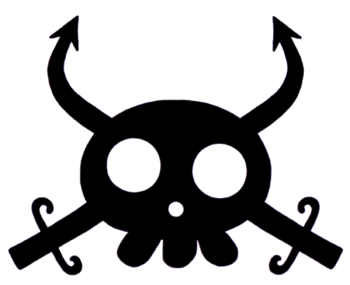 The followers of Emporio Ivankov, they were once prisoners of the Great Gaol of Impel Down that were "spirited away", while actually they were just freed by Ivankov or had found a way to reach him. They resides in the hidden Level 5.5, built by a prisoner with tunneling Devil Fruit powers where they constantly party and keep an eye on the situation in the prison. After Luffy's outburst, they evade with their leader. After the Marineford saga, they finally reach Kamabakka Kingdom, where they joined the local Okama subjects.

For Emporio Ivankov himself and Inazuma see their entries on the Revolutionary Army page. For Caroline see his entry on the Anime-Only page.