"Propaganda is spread throughout the world, provoking revolution in many kingdoms, and causing the downfall of many countries." —Nico Robin
Advertisement:
"Pirates usually don't attack the government or Navy on their own. But there is a force that is trying to directly challenge the World Government. That's the Revolutionary Army. The man who is leading them is Dragon.'"
—Nico Robin, Chapter 432

The Revolutionary Army is a mysterious and rebellious military organization that directly opposes the current established World Government, with the intention of overthrowing the World Nobles, the descendants of the founders of the organization. Led by Monkey D. Dragon, whose past and goals are still unknown, the Revolutionary Army is an eclectic group of misfits, who prefer to act covertly as they seem to lack the military power to wage an open war against the World Government. However, they are up to now shown to be benevolent. Despite being introduced as early as the Loguetown arc, their plans, members and ways of operating are still mostly shrouded in mystery.

The Reverie arc has finally shed some light on the goals of the Revolutionaries — specifically that they don't want to destroy the Marines or World Government itself, but rather the World Nobles that control said World Government and enslave whomever they wish. Not only that, Dragon plans to use the Reverie to declare war on the Celestial Dragons. 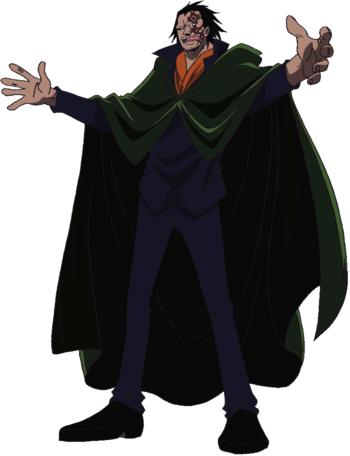 "Live as you wish, Luffy. There are times in history when it takes a will such as yours -together with chance and confidence- to make people question the world! The day will come when we shall meet..."
—Chapter 440

Monkey D. Dragon "The Revolutionary" is the son of Monkey D. Garp and the father of Monkey D. Luffy. A very mysterious man, very few know about his relation to them due to him being the supreme commander of the Revolutionaries — who directly oppose the World Government — and being the world's most wanted man. The World Government fears his ideas will spread chaos in the world, and he has apparently already spread them amongst many nations... mostly through war.

Dragon's bounty remains unknown, but because he's the most wanted person alive, it's presumably among the highest, if not the highest, currently active.

"I finally managed to get here, Ace. Look, our Luffy started to make his way to become the "King of the Pirates"again. That's our little brother!"

The Chief of Staff of the Revolutionary Army, second only to Dragon himself. Luffy and Ace's childhood friend and sworn "brother". His weapon of choice is a long pipe, and was the first of them to set out on their dream of becoming great pirates. He was believed to have been killed by the World Nobles, but is later revealed to have survived and has been taken in by Dragon, having lost his memory in the process and didn't remember his past until he hears the news of Ace's death. During his time with the revolutionaries, he Took a Level in Badass, leading him to ultimately rising to the rank of Chief of Staff, Dragon's second-in-command. And this is before he ultimately finds and eats the Flame-Flame Fruit (Mera Mera no Mi), inheriting Ace's power and will. 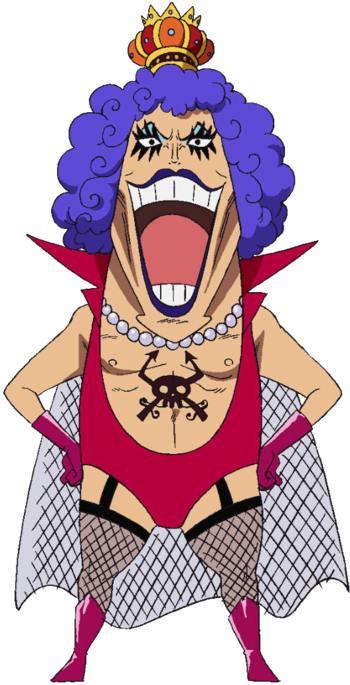 "We have crossed this barrier called 'gender!'"

The G Army Commander of the Revolutionary Army, which focuses the Grand Line. The former ruler of Kamabakka Kingdom, Emporio Ivankov, or Iva for short, is a transvestite known as a "Miracle Worker" for saving the lives of several people. However, because he's also an officer of the Revolutionaries trying to overthrow the World Government, he was captured and put into the world's worst prison, Impel Down. Ivankov's power comes from eating the Horm-Horm Fruit (Horu Horu no Mi), which allows him to inject hormones into the human body. These hormones can cause sex changes, increased adrenaline, bodily growth, and other things, which in his words make him an "engineer of the human body". This is the reason that he was able to heal many people from the brink of death. However, he claims he's not a "Miracle Worker," and merely allowed people with the "Will to Live" to go on. He can't help those who don't have the drive to help themselves. He is also a master of Newkama Kenpo.

Iva is flamboyant, like Mr. 2 Bon Clay, and has a habit of panicking, then saying the opposite of what he said earlier. He is very proud of being a transvestite and of the people he ruled over in a hidden level of Impel Down, even expressing his ideals about it, and doesn't care if anyone disagrees with his views. In fact, he has made enemies of people who are furious at how spreading his view has affected them personally, but doesn't seem to care about that either, and deals with them in his own, unique way. 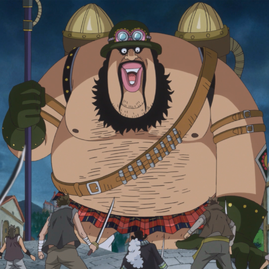 The Captain of the Western Forces in the Revolutionary Army. He is a giant and an okama who wields a trident. He has eaten the Push-Push Fruit (Oshi Oshi no Mi) which lets him manipulate the earth like clay. Notably, Morley appears to be the first giant in story canon to have eaten a Devil Fruit. 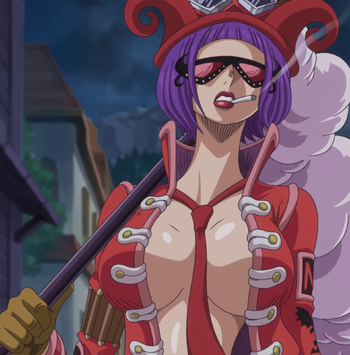 The Captain of the Eastern Forces of the Revolutionary Army. She uses her Pump-Pump Fruit (Kobu Kobu no Mi) to rally listeners to awaken their latent power and strength with a wave of her flag. 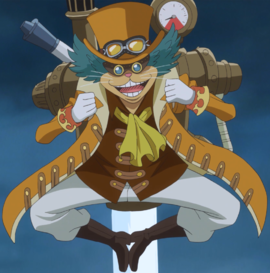 "I've got my newly invented weapons to use!! You don't have to go and beat them all before I get a shot!!! Let me use my new weapons!!"
—Chapter 904

The Captain of the Southern Forces of the Revolutionary Army. He is a cat Mink and an inventor who uses his own created weapons to fight, such as a freeze ray. 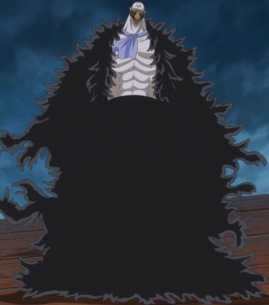 The Captain of the Northern Forces of the Revolutionary Army. He has seemingly eaten a Devil Fruit that allows him to turn his body into crows, which he uses to transport messages and even people around with.

Inazuma is a Revolutionary officer and Ivankov's deputy commander of the G Army. He has eaten the Snip-Snip Fruit (Choki Choki no Mi), which allows him to turn his hands into large scissors that can cut solid objects like paper and even manipulate them like strips of paper, all while maintaining their other properties. Thanks to Ivankov's Devil Fruit Powers, he sometimes appears as a woman.

The Fish-man Karate assistant instructor and an officer of the Revolutionary Army alongside Sabo, whom she is well-acquainted with. She was originally introduced in a flashback as a little slave girl who was liberated by Fisher Tiger and taken home by the Sun Pirates twelve years ago. After the unfair and prejudicial treatment her hometown and the Marines gave the Fish-men in return for her rescue that led to Fisher Tiger dying and refusing life-saving treatment with human blood transfusion, she later joined the Revolutionaries to set a better example, and became fast friends with another Fish-man, Hack, learning Fish-man Karate from him as his pupil.

"Tyrant" Bartholomew Kuma
A former member, see his entry on the Seven Warlords of the Sea page. 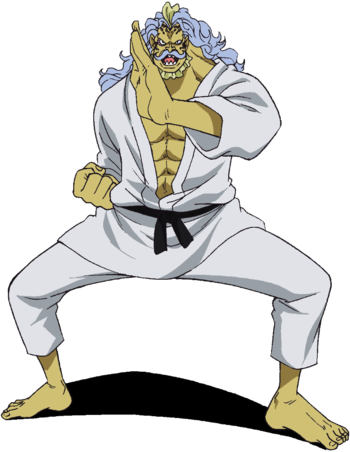 A Japanese soldier Fish-man who is a Revolutionary who works with Sabo and Koala.