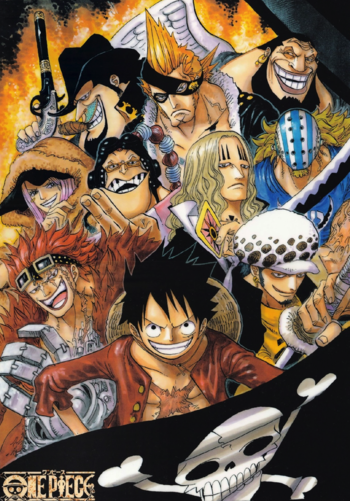 The Eleven Supernovas Post-Time Skip (Missing Roronoa Zoro)Characters Clockwise from the bottom: Monkey D. Luffy, Eustass Kid, Jewelry Bonney, Scratchmen Apoo, Capone Bege, X. Drake, Urouge, Killer, Basil Hawkins, Trafalgar Law.
Advertisement:
"Somewhere along this lot may be the one who'll lead the next generation of pirates. If this many rookies pour in at once, the New World will be a sea of blood."
—Shakuyaku "Shakky" describing the Eleven Supernovas, Chapter 498

At the same time Luffy and Zoro gained in infamy, other rookie pirates managed to acquire bounties over 100 million berries. They have taken differing routes along the first half of the Grand Line, implicitly facing dangers and hardships equal to that of the Straw Hat crew. Although most of them have never met each other before unwittingly gathering in Sabaody, they are notorious for having gained exceptional bounties at the same time period, earning them this collective moniker.

Post-Time Skip, they are collectively known as the "Worst Generation", together with the Straw Hats and Blackbeard Pirates, as they have gained even more notoriety for their crimes, and sometimes their willingness to challenge the current status-quo, for instance defying the Four Emperors. Nonetheless, it is clear that they are nowhere near the might needed to pose a sizeable threat to said Emperors, as one alliance was crushed by Kaido alone, while another barely escaped Big Mom's territory. Others have also joined the ranks of the Emperors themselves. 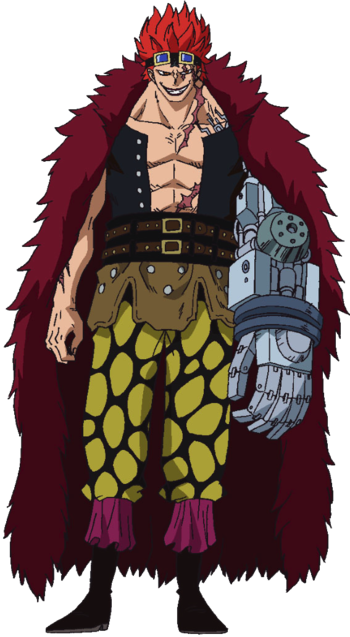 "On our way here, when we said that ['I'm going to be the one to find the One Piece'], it always made people laugh at us. But each and every time, I killed all those who laughed! Still, in the oceans ahead, those who don't have the guts to say it will die first! Let's meet again in the New World!"
—Chapter 505

Eustass Kid is the captain of the Kid Pirates and one of the eleven pirates dubbed with the moniker "Supernova". He's the only one who had a bounty higher than Luffy's. He's known for his violent personality, though he's also knowledgeable in the ways of how the world works and when to step back. Like Luffy, he aims to become Pirate King, and is infamous for leaving behind a trail of bodies of those who mocked him for it. He says that he possesses the determination to achieve the impossible, which is necessary if one is to succeed in the New World. His Magnet-Magnet Fruit (Jiki Jiki no Mi) grants him power over magnetism.

After the time skip, he was first shown watching the black market, with a new metallic arm. Some time later, he strikes an alliance with Apoo and Hawkins to strike down Shanks. Unfortunately, before he could even get anywhere on that, they're attacked by Kaido and resoundingly trashed, leaving him a half dead prisoner of Kaido.

He makes his big return in the Wano Arc, reuniting with Luffy when the latter ends up in prison. From the start, it's clear however that their team-up will not be a smooth one.

"I apologize for my men threatening you. Taking a life on this day will only bring our crew bad fortune."

Coming from the North Blue, Basil Hawkins is the captain of the Hawkins Pirates. He tends to act in a stoic manner even when confronted with danger. This is perhaps because as Hawkins is a fortune teller, he has little to worry about concerning his fate. His Devil Fruit is the Straw-Straw Fruit (Wara Wara no Mi), and it is a strange one. Hawkins can make voodoo dolls that will absorb any blow he takes and deflect the damage to the person the doll was based off of, and avoid fatal injuries as well, though with a limit of 10 straw effigies. In addition, it allows him to turn into a scarecrow-like monster with nails for claws, or create a demon-like entity that serves as as extension of his body, though his true power has yet to be shown. He also has very accurate foresight, though it's unknown if this is an inherent power, the result of greatly honing Observation Haki skills, or another effect of his Fruit. Another unusual ability connected to his powers is his tarot card deck, which can influence fortunate or unfortunate events to happen each time he draws a card.

After the Time Skip, he strikes an alliance with Apoo and Kid. He later joins Kaido instead and becomes one of the Animal Kingdom Pirates' Headliners. 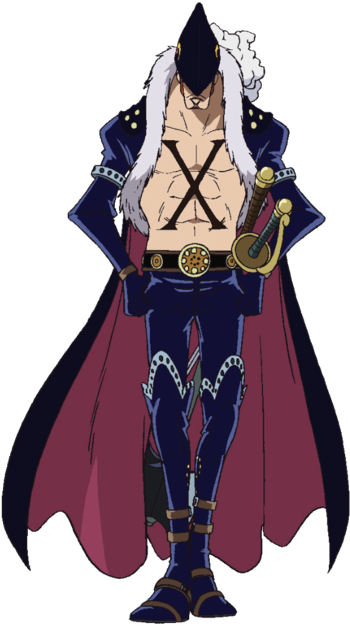 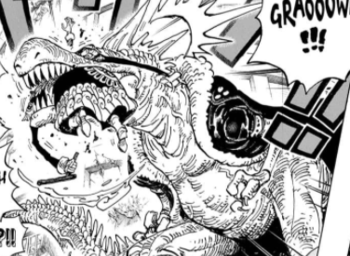 Coming from the North Blue, X. (pronounced "diez") Drake is the captain of the Drake Pirates. A former Marine Rear Admiral turned pirate, he is aware of many of the Marines' strategies, and projects such as the Pacifista. He is an "Ancient Zoan" Devil Fruit user, having eaten the Dragon-Dragon Fruit (Ryu Ryu no Mi), Model: Allosaurus. After the timeskip, he at some point joined the Animal Kingdom Pirates, and is made one of their Headliners and one of the Tobi Rippo, the six strongest Headliners.

"Roar of the Sea" Scratchmen Apoo 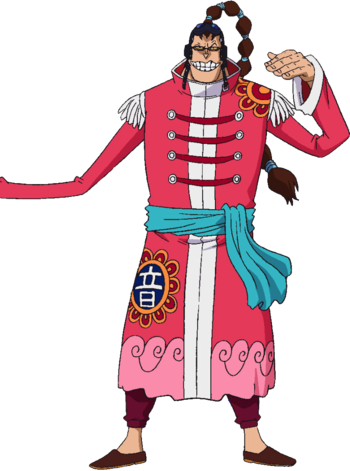 Being from the Longarm Tribe in the Grand Line, Scratchmen Apoo as such has arms so long, they're double-jointed. Captain of the On Air Pirates, Apoo's bounty is 350 million berries. Although Apoo's fighting style seems to be mostly defensive, as shown with his brief skirmish with another of the Supernovas, Eustass Kid, he still can't deny himself a good brawl should the opportunity present itself. He seems to be rather perceptive as when witnessing another Supernova Roronoa Zoro of the Straw Hat Pirates nearly attack a World Noble, he noted he gave off an "insane killing intent". He has eaten the Tone-Tone Fruit (Oto Oto no Mi) which allows him to morph parts of his body into the shape of musical instruments, and by playing them he can manifest different effects on his opponents such as slashes, explosions, and punches.

After the Time Skip, he strikes an alliance with Kid and Hawkins. However, it is later revealed by Hawkins that Apoo had already joined the Animal Kingdom Pirates during the Time Skip, and that their alliance was a trap set up by Apoo to force them into a confrontation with Kaido himself.

Killer is the first mate to the Kid Pirates, and one of the eleven pirates dubbed with the moniker "Supernova". A man of few words, much of Killer's personality is unknown, except he is slightly arrogant, yet much more level-headed than his captain.After Kid is beaten by Kaido, Killer is brought to Wano, force-fed a SMILE Fruit and becomes Orochi's laughing attack dog - Kamazo the Hitokiri.

The captain of the Bonney Pirates and only female Supernova, Bonney has one of the more stereotypical views on what a pirate should be like in the series, which is a completely amoral person who destroys all in their way and looks out only for themselves. She has eaten a Devil Fruit that allows her to change her own age as well as others. She uses it as a disguise on herself and makes her opponents either too young or too old to fight her. Interestingly, the clothes of the Marines she changes into children don't change to fit their smaller forms while her clothes do, implying that skintight Stripperific outfit is so her clothes always fit her when she transforms. Other than that, she has also demonstrated a powerful kick to Blackbeard's face that was enough to make him bleed, suggesting a good amount of physical strength (a common trait for the strongest of the One Piece world).

She has proven to be a very rude and unpleasant woman who has a monstrous appetite and holds deep grudges for people who irritate her in any way, currently setting her sights on the Straw Hats. As a captain, she shows conflicting displays of competence. She saved herself, her crew, Zoro, and the entire Sabaody archipelago (initially, at least) by immediately restraining Zoro when he was about to kill a World Noble, which would have certainly caused nothing short of a Marine-issued Buster Call. However, she has been shown to cause time delays for her crew with her binge eating, even staying at a restaurant to eat for a while despite knowing that Admiral Kizaru was coming.

Bonney is hit especially hard by the events of Marineford, and unfortunately becomes caught up in their aftermath. However, two years later, she has somehow gotten out of that hairy situation, but is now apparently on her own, fending for herself and trying to hide from everybody. Eventually, her travels take her to an infiltration mission of the holy land of Mariejois, where she is mortified to find an old friend in a deplorable state. 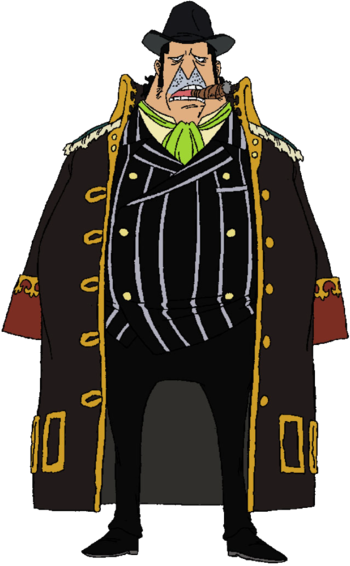 "You guys have already lost... in sheer military force!"

Coming from the West Blue, Capone Bege is one of the older Supernovas and he's the captain of the Firetank Pirates. Once a powerful Mafia boss in his native Blue, he became bored with his dominance of the underworld and decided to head out to sea to conquer and loot as many powerful pirate crews as he can. He has eaten the Castle-Castle Fruit (Shiro Shiro no Mi); his body is a medieval-style human castle (including horses and mounted cannons and all) and his crew (and anyone) can shrink and "enter" him to mount surprise attacks on enemies, and he can interact with them through a manifestation of his conscious self. If that's not enough, he can assume the literal form of a castle human and beef himself up with impressive offense and defense, but if his castle body sustains any harm in that state, his consciousness feels it as well.

He's rather infamous for his sadism, high class attitude, and very short temper. However, his most prominent attribute is his direct approach to victory. Bege is a cunning and crafty opportunist who always goes after the head honchos and no one else, just to enjoy watching their organizations dissolve into chaos after he knocks off the boss.

He also allied himself with the Big Mom Pirates during the Timeskip, serving as a "Rook" combatant in her ranks and marrying one of her daughters to seal his servitude, Charlotte Chiffon. Through her, he now has a son, Capone Pez, making him the only known Supernova so far who has his actual family alongside him as he operates his crew. 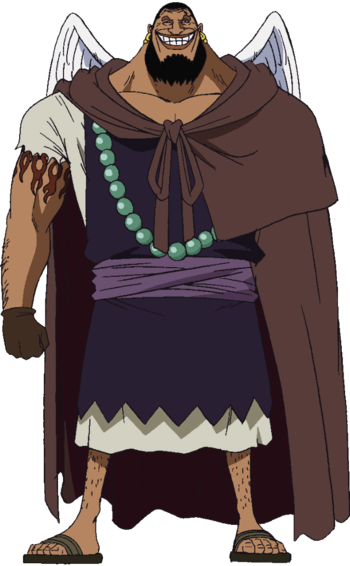 Urouge is the captain of the Fallen Monk Pirates and the oldest supernova, and he has the smallest bounty of the group. He is a Mighty Glacier who hails from a sky island, as you might have figured. He has a perpetual smile on his face which never goes away, even when he's seen showing fear. He has eaten a Devil Fruit that allows him to convert damage he has sustained into raw power and rapidly expand his muscles.