Characters / One Piece: Seven Warlords of the Sea 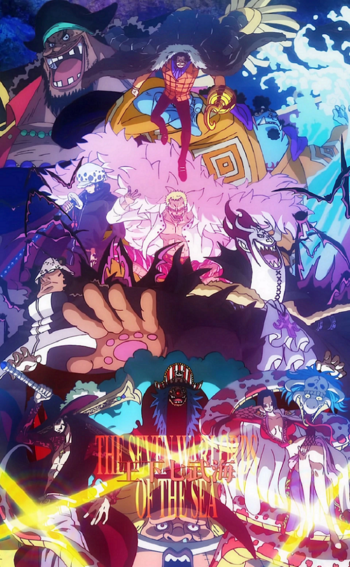 "The Seven Warlords of the Sea inhabit wild regions, and unlicensed pirates are easy targets for their marauding. The government allows the Seven Warlords to raid the seas in return for a cut of their haul. Other pirates call them "government dogs". But they're tough!!!"
—Yosaku, chapter 69

The Seven Warlords of the Sea (王下七武海, Oka Shichibukai, literally translating into the "Royal Seven Military Seas") were a loose group of powerful individual pirates who have allied themselves with the World Government, in exchange for certain benefits. Upon becoming a Warlord, their bounties got frozen, meaning the Marines and World Government stopped actively hunting them. They were permitted to retain their crews, territory, and any operation that they have. In exchange, they were required to hunt other pirates and do the government's bidding when needed, which can include, but is not limited to, helping them fight wars. They were also required to give the World Government a portion of their plunders, though this was rarely followed. Along with the Four Emperors and Marines, the Seven Warlords used to comprise one of the Three Great Powers that define the current era. Although they were referred to as a group, the Warlords never worked together nor do they even like each other; as a result, they mainly served as a supplementary buffer for the World Government against the pirate threat.

While the Marines would rather not work with such characters, they feel as if they have no choice if they want to preserve the "balance" of the world. In light of their abysmal performance, such as the Straw Hat crew regularly managing to defeat one of them, several Warlords being revealed as corrupt or others just plainly betraying the Government, several voices have been raised to scrap the whole system altogether, including a high-ranking World Government figure, Admiral Fujitora.

During the Reverie, the decision is made to abolish the Warlord system, aided by the testimonies of the kings of the Alabasta and Dressrosa kingdoms, both of which have suffered greatly under the Warlords Crocodile and Doflamingo respectively. The proposal is approved with a majority vote, stripping all Warlords of their titles and privileges, and dismantling the system altogether. The Marines immediately move to arrest the former Warlords, who are now just regular, albeit extremely strong, wanted pirates.

Members at the Start of the Story

These are the original seven Warlords as they appear in the story; a few of them get deposed and have others take their place.
"Hawk-Eyes" Dracule Mihawk 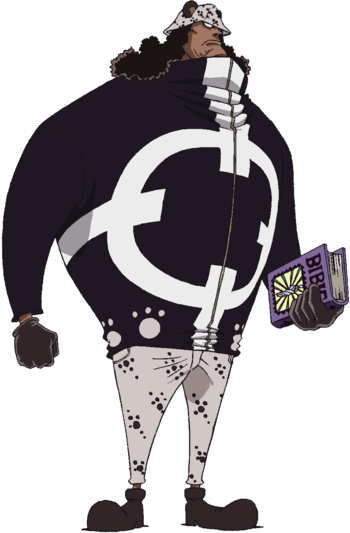 "We have no obligation to cooperate with the Marines save where the government is directly involved."

The fourth of the Seven Warlords of the Sea to be formally introduced. Kuma is a very large man who is always seen carrying a bible. He has a reputation for being an incredibly ruthless pirate who crushed anyone to stand in his way, yet his quiet, calm demeanor and his (in hindsight) merciful actions fly in the face of that. He also has eaten the Paw-Paw Fruit (Nikyu Nikyu no Mi) and is the prototype for the Pacifista project known as PX-0.

He is also known for following the World Government's orders to the letter, unlike the other Warlords. Yet he also seems to follow the code of Moral Justice, rather than the seemingly more prevalent Absolute Justice, and unlike many other characters, seems to have an idea of what goes on behind the scenes. It also turns out that he is an officer of the Revolutionary Army.

His bounty at the time he became a Warlord was 296,000,000 berries. With the dissolution of the organization and his current status as a slave of the World Nobles, it's unknown if his bounty has been reinstated. 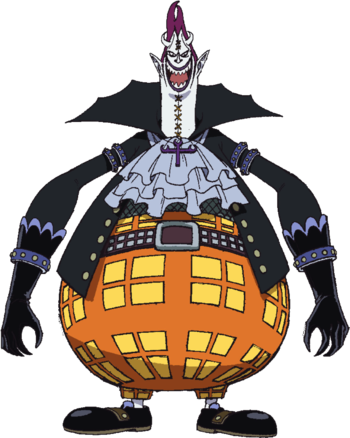 "Straw Hat, you bastard... just you watch! You think you had it tough so far? You don't even know tough! But don't worry... the real nightmare's waiting for you in the New World!"

The fifth of the Seven Warlords to be formally introduced and the main antagonist of the Thriller Bark Saga. Gecko Moria is the captain of the Thriller Bark Pirates, leader of the "Mysterious Four", and resides on a massive island/ship known as Thriller Bark, where he kidnaps unsuspecting travelers and uses the power of the Shadow-Shadow Fruit (Kage Kage no Mi) to strip them of their shadows and utilizes them to raise an army of zombies. He believes the undead to be superior to the living, as they can just be replaced when destroyed and do not possess souls. This way of thinking is due to his entire previous crew the Gecko Pirates being wiped out by the Emperor Kaido one year after Roger's execution in the land of Wano.

He loses his status as a Warlord after the World Government deem him too weak to continue carrying the title following his defeat against Luffy, though this was held off until the end of the Marineford War as he was needed to fight against Whitebeard's forces. In the aftermath, he is rescued by his subordinate Absalom when Doflamingo attempts to kill him on the World Government's orders.

His bounty at the time he became a Warlord was 320,000,000 berries. With his expulsion and the eventual dissolution of the organization, it's unknown if his bounty has been raised since then.

These are formerly regular pirates who become Warlords during the course of the story.
"Blackbeard" Marshall D. Teach
See his page.

Earned the Warlord status by defeating Portgas D. Ace and handing him over to the Marines. Later lost his status when he revealed he was only using it in his grand scheme against Whitebeard. Once he got what he wanted, he willingly gave it up and took Whitebeard's place as part of the far more dangerous Four Emperors.

Joined the Warlords during the timeskip by providing the Marines with the hearts of 100 pirates, but loses the Warlord status when he reveals that Luffy and he are working together willingly in an alliance which is a breach of agreement with the World Government. 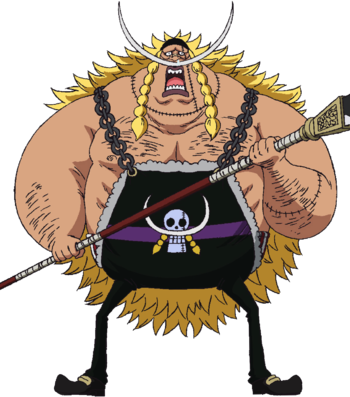 The self-proclaimed son of the deceased Whitebeard. He became one of the Seven Warlords of the Sea during the timeskip. There's a lot of doubt on whether he is truly Whitebeard's son, but his strength is said to be comparable to the man himself in his youth.

His mother and also self-proclaimed lover of Whitebeard, Bucking, accompanies him around, telling him what he should do, with him blindly complying.

His bounty at the time he became a Warlord was 480,000,000 berries. With the dissolution of the organization, he forever holds the record for having had the highest bounty of the group. As a free pirate once again, it's currently unknown if his bounty has been raised.

Alternative Title(s): One Piece The Seven Warlords Of The Sea