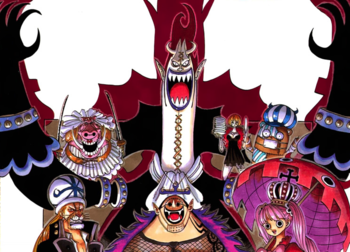 The Mysterious Four and UndeadCharacters Clockwise from the top: Gecko Moria, Victoria Cindry, Kumacy, Perona, Hogback, Absalom, Lola.
"With your strength, you'll just die anyway if you continue on your voyage. You're not fit for the New World!! It seems you have a couple of good underlings... but you'll still lose all of them!! Do you know why?!! I was like you once... trusting in my famous and talented crew. But I concluded long ago that it wasn't enough!! You can never count on your crew because they are mortal!! Zombies are already dead, so they have nothing to lose!! Zombies are immortal!! Even if they are purified, they are expendable soldiers and can be easily replaced!! I will take my army of undead warriors and seize the title of Pirate King!! You should all be thankful that your shadows will become my underlings!!"
—Gecko Moria (Chapter 481)
Advertisement:

The large force of the undead that serves the living Mysterious Four, including the Warlord of the Sea Gecko Moria. Mainly composed of hordes of Frankensteinian Zombies, created by Moria's power and divided into four categories (Wild Zombies, Surprise Zombies, Soldier Zombie and General Zombie). Alive members include Absalom of the Graveyard, chief of the General and Soldier Zombies, Perona the Ghost Princess in charge of the Wild and Surprise Zombies, Doctor Hogback and his bodyguard Victoria Cindry, and the Elite General Zombie Ryuma the Samurai with Brook's shadow. Their strongest zombie is the special model # 900, Oars the Devil.

Moria's minions all serve on Thriller Bark, a ship vast enough to pass off for an island, and the ship dwells on the foggy Florian Triangle, waiting for unsuspecting navigators to be captured and their shadows stolen in order to swell their ranks. They are the main antagonists in the Thriller Bark Arc.

Unfortunately for them, the Straw Hats happen to end up in Thriller Bark, where Moria steals Luffy's, Zoro's and Sanji's shadow to make some powerful zombies, especially Luffy's. However, once the Straw Hats fight back, Moria has to gather all the shadows upon himself and after his defeat all the shadows are freed and the zombies become lifeless corpses, leaving the Mysterious Four as the sole members of the crew, but it doesn't last long since Perona gets sent away by Kuma and Moria loses his Warlord status after the Summit War.

Absalom "of the Graveyard"

One of the Mysterious Four of Thriller Bark and leader of the Soldiers Zombies and General Zombies. He's a real pervert (to the point the zombies calls him "Ero-salom") but outside of that he's a really dedicated persona, even moreso than Hogback and Perona and is also really devoted to his boss, Gecko Moria. He has eaten the Clear-Clear Fruit (Suke Suke no Mi) which gives him the ability to become invisible and make invisible anything he touches. He also has his body modified with different animals body parts, making him much stronger.

He first "appears" on the ship where he harasses Robin and later drugs and kidnaps Nami to be his bride. Both his attempts are unsuccessful, the first one ends with him trading blows with Sanji, mad at him for both trying to marry Nami and "stealing" him the one Devil Fruit he would've eaten and, after a brief fight, he's defeated. And in the second attempt Nami wakes up and shocks him, knocking him out for good. At the end of the arc, he manages to recover and leave the island along with Hogback and an unconscious Gecko Moria.

At Marineford, he saves Moria's skin and after the two year time-skip he has become a reporter. At some point, he's abducted by the Blackbeard Pirates and killed to poach his Devil Fruit powers, with his ability going to Shiryu. 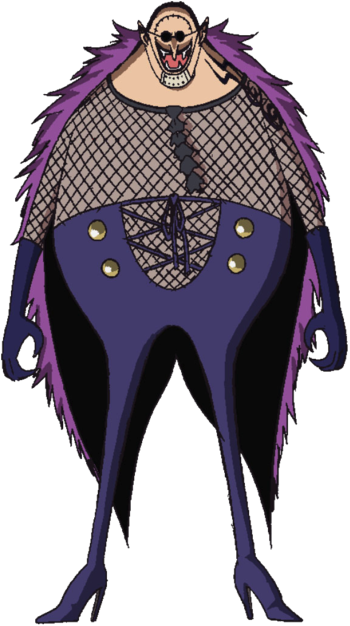 "I practiced surgery for money, but all those annoying patients just kept coming to me incessantly, from all over the world! "Please save my father!" "Please save my child!" It was such a pain!!! I could save the lives of those whom no other doctor could treat!! Now can you understand why a man of my genius is in such pain?!"
—Chapter 468

One of the main antagonists of the Thriller Bark arc, Dr. Hogback was a world-famous surgeon whose skills were considered miraculous. He disappeared ten years before the beginning of the main storyline. Chopper once idolized him, and is surprised to discover he was in Thriller Bark all along. He claimed to the Straw Hats that he arrived on the island to study the zombies there. He is assisted by his zombie servant Victoria Cindry, who is prone to smashing plates and making cutting remarks, especially about him.

The crew later discovers that he was the one who helped create the zombies, and is working for one of the Seven Warlords of the Sea: Gecko Moria. He reveals to Chopper and Robin the truth of his disappearance and involvement with Moria: He hated the fame his skills as a doctor gave him, and that Victoria Cindry was a celebrity he fell in love with, but died in an accident. Depressed over the news of her death, he resigned. However, Moria contacted him with the promise of bringing Cindry back to life, and so he stole her corpse and disappeared to Thriller Bark, revived her as a zombie, and created Moria's undead army.

"Horororo...this should be fun! Well, for me at least."
Click here to see her Post-Time Skip appearance

One of the Mysterious Four of Thriller Bark, who commands the Zombie Animals and Ambush Zombies of the island ship. She has eaten the Hollow-Hollow Fruit (Horo Horo no Mi), that allows her to create ghosts as well as sending out an astral projection of herself (at the cost of having to keep her body still). During the Thriller Bark caper, she was defeated by Usopp and later blasted off the island to Gloom Island by Bartholomew Kuma. Zoro soon joins her and they reach a truce in regard to their situation. Helps guide Zoro back to Sabaody two years later so he can reunite with the rest of the Straw Hats, even keeping the Marines at bay so they can escape. Then, she goes back to Gloom Island and stays there with Dracule Mihawk in his mansion.

In General
Oars "The Devil" 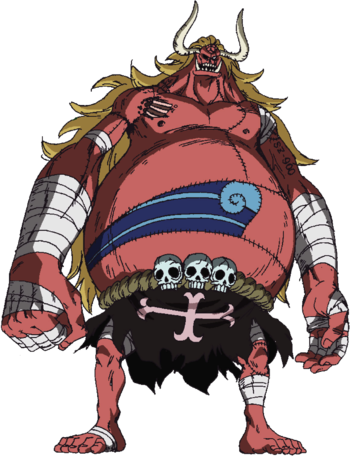 A humongous Giant from a clan known for its evil nature and who rampaged throughout the world 400+ years ago, only to die of the cold in the Northern Continent, his body was found by Gecko Moria and was redesigned by Dr. Hogback to be Special Zombie #900.

When Moria steals Luffy's shadow, and put it inside Oars. Moria feels that he has found the perfect zombie to become Pirate King with, but after a incredible battle with the Straw Hat Pirates, Oars is crippled, and his shadow eventually finds its way back to Luffy, re-dying once more. However, before he died centuries ago, he had at least one child, and his name lives on with his grandson Little Oars Jr. 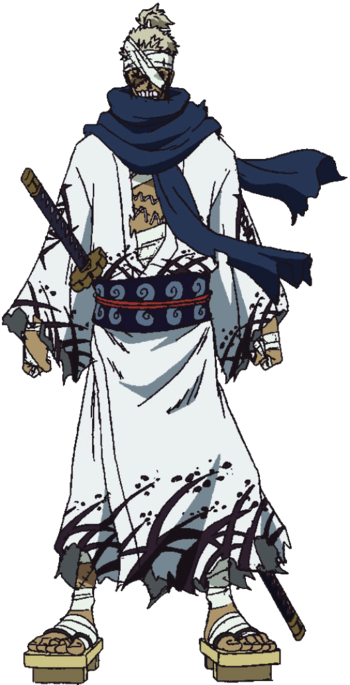 "Yohohoho!"
"The famous blade of the legendary samurai... Shusui! With you as its master, this blade will surely be satisfied."
—Chapter 467

A very powerful samurai from the Wano Country who has become legendary for having killed a dragon. He's also the protagonist from Oda's previous one-shot Monsters from Wanted! (1998), which is canonically part of One Piece's story. After his death, Gecko Moria took his corpse and revived him as a General Zombie with Brook's shadow, making him one of Thriller Bark's strongest zombies. His zombie number is unknown but is likely in the 800s series due to being a general zombie.

Brook tries to get back his shadow twice, but due to his weaker body, Ryuma wins both fights, and after the second victory he tries to cut his afro but is stopped by Zoro. He engages in a duel with the swordsman, which he then loses and gives up his precious sword Shusui to its new master.

"It would be good if plates completely ceased to exist..."

Hogback's personal zombie servant and (one of the few zombies who's fully human-like). Her zombie number, 400, is tattooed on her calf. Being a zombie, she's very obedient to Hogback and disobeys him only when he tells her to not break any plates, since she has a passionate hate toward them (to the point of serving meals directly on the table). This hate toward plates comes from Margaret, a servant whose shadow is infused in Cindry's body. After Gecko Moria is defeated, Cindry becomes a dead body and Margaret gets back her shadow.

When Victoria Cindry was still alive, she was a nice and famous stage actress whom Hogback was in love with, but she rejected his proposal of marriage because she already had a fiance. After she died, twelve years before Thriller Bark's events, Hogback resurrected her and turned her into his personal servant.

During her fight with Hogback against Robin and Chopper, the latter, after hearing her story, tries to bring back some of her humanity with words. In the end, she manages to disobey Hogback's last order and smiles.

The commander of the wild zombies and Perona's servant (being based on her teddy-bear). He wears a surgical mask on his mouth because Perona doesn't like his voice, and constantly shut him up whenever he tries to speak. He's very loyal to Perona and attacks anyone who tries to harm her.

During the Thriller Bark Arc, he attacks Usopp, who is fighting Perona, until the sniper shoves some salt in his mouth, making him expel his shadow. After the two year timeskip, Perona finds his body (not decomposed yet) still at Thriller Bark. 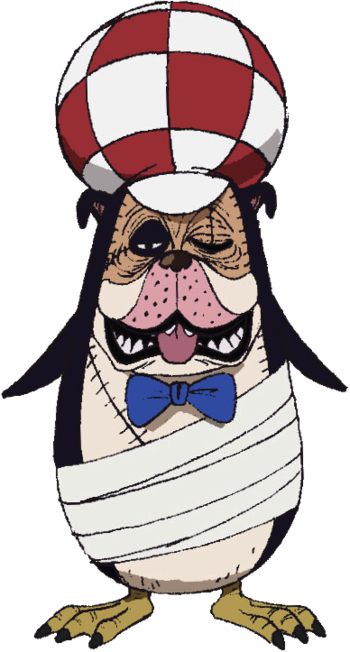 A penguin zombie with a dog face who's reanimated with Sanji's shadow. Since Moria didn't recognize Sanji in his bounty poster, he put his shadow in an ordinary Wild Zombie, giving him much strength.At first, Dog Penguin is chivalrous like his shadow's owner, but quickly loses memory and personality (except his rivalry with Jigoro, who has Zoro's shadow).

During his fight (with Hogback, Cindry and Jigoro) against Chopper and Robin, the doctor accidentally orders him and Jigoro to jump out of the tower, and they obey.

Jigoro "of the Wind" 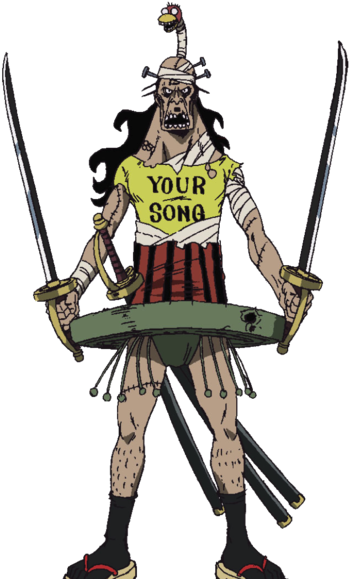 A General Zombie who's revived with Zoro's shadow. While alive, he was a famous swordsman who killed a thousand pirates to defend his family. As a zombie, at first he's a proud and arrogant warrior, until he turns into a zombie fully devoted to his masters.

He fights (with Hogback, Cindry and Dog Penguin) against Robin and Chopper, until Hogback accidentally orders him and Dog Penguin to jump out of the tower, and they do. 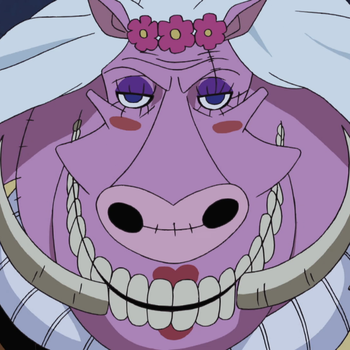 A zombie warthog with a white bride dress, who was revived with Lola's shadow. Just like her shadow's owner, she's determined to get married, though she doesn't propose to any men she meets but instead fully concentrates on Absalom. Her zombie number is unknown.

Despite an initial mistrust, she befriends Nami, with the latter trying to pass for a man but zombie Lola quickly seeing through her lie, and even saved the pirate from one of Absalom's marriage attempt. After Oars's defeat, Moria removes Lola's shadow with his ''Shadow Asgard", turning zombie Lola back into a lifeless corpse. 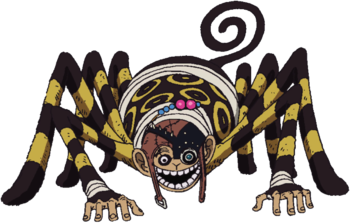 One of the General Zombies. He's a giant, literal spider monkey that has the job to capture ships using his web. His zombie number it's unknown but, considering he's a general zombie, it's probably a number in the 800s series.

He fights Franky and Nico Robin until Brook arrives, defeats and purifies him.