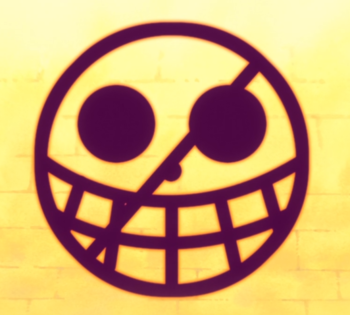 Although Donquixote Doflamingo may be one of the Seven Warlords, he's not above hiring pirates and gathering old associates to work under his new "Smiley" brand banner. Most people who are working for Doflamingo usually have a tattoo of his jolly roger somewhere on their person, or on the property that belongs to Doflamingo. While individual members have appeared in the background throughout the manga, a 'crew' of sorts only surfaced during the Punk Hazard arc.

More details are given during the Dressrosa arc: the crew has 10 officers which leads around 2000 members each, and 3 elite officers with a card suit theme (except for the empty Heart seat), as well as 2 abroad officers. They are:

The crew is a powerful 2,000 strong army of low-level pirates based in the island of Dressrosa, their base and to their eyes, Doflamingo's rightful territory. They are Doflamingo's muscles and staff his various operations across the world, from slavery to weapons trafficking, notably exploiting the horde of toys at their disposol as free slaves as well as Dressrosa's Dwarves to cultivate the artificial Devil Fruits they sell to Kaido. They are the main antagonists in the Dressrossa Arc and the Dressrossa Saga as a whole.

Nonetheless, their takeover of Dressrosa, enmity with the Straw Hats and Law, and the angry army of criminals and warriors that were transformed into toys have led to the formation of an exceptional alliance which managed to take down the Donquixote Pirates.

"Heavenly Demon" Donquixote Doflamingo
Captain of the Donquixote Family and one of the Seven Warlords of the Sea. See his entry in his page.

In General
The top members of the Donquixote Pirates who are powerful and trusted of Doflamingo's closest subordinates.
Trebol 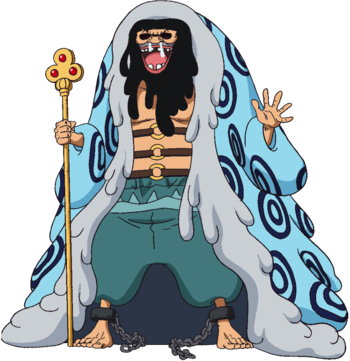 Leader of the Trebol Army, the special powers division. He has eaten the Sticky-Sticky Fruit (Beta Beta No Mi), which allows him to secrete mucus. That explodes.

He was the one tasked with guarding the crew's special officer Sugar. 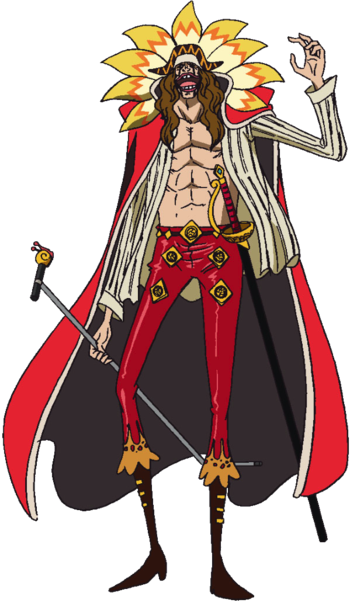 Leader of the Diamante Army, the fighting division. He has eaten the Flutter-Flutter Fruit (Hira Hira no Mi), which allows him to flatten objects into cloths in order to change their shapes.

He was tasked with guarding the Flame-Flame Fruit, which was the prize of the Corrida Colosseum tournament. 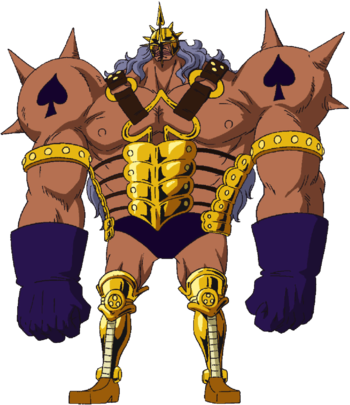 Leader of the Pica Army, the commando division, he has eaten the Stone-Stone Fruit (Ishi Ishi no Mi), which allows him to assimilate himself with stone and control it so long as it remains in contact with him.

"Correct yourself, it's Vergo-san to you."

A Marine Vice Admiral and head of G-5, secretly working for Joker, aka Donquixote Doflamingo. He has the ability to change the density of himself and objects in his possession, using Armament Haki. He's a Rokushiki user as well, being shown so far to be able to use Geppo and Shigan. He was the first Corazon, and gave up the Heart Seat to infiltrate the Marines. 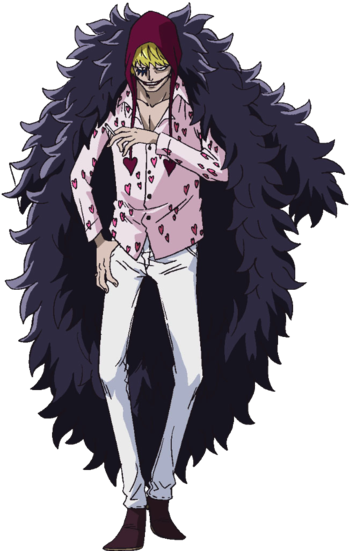 "The lost boy blinded by anger and despair to follow the Mad Pirate is no more. There is nothing he can learn from a monster hungering for destruction like you!! Just leave him the hell alone!! He is already free!!"
— To Doflamingo about Law

The previous Corazon. His real name is Donquixote Rocinante, Donquixote Doflamingo's younger brother, who Trafalgar Law holds a deep respect for. A very clumsy man who hates children so much he beats them whenever he can. In truth, he's a Marine working undercover for Sengoku, and his child-hating habits are a facade to prevent any kid from joining the Donquixote Pirates, and even helps Law into looking for a cure for his disease. 13 years prior to the Dressrosa arc, Doflamingo finds out about his brother's betrayal and kills him. He ate the Calm-Calm Fruit (Nagi Nagi no Mi — "Nagi" means "silence"), which gives him abilities related to soundproofing. 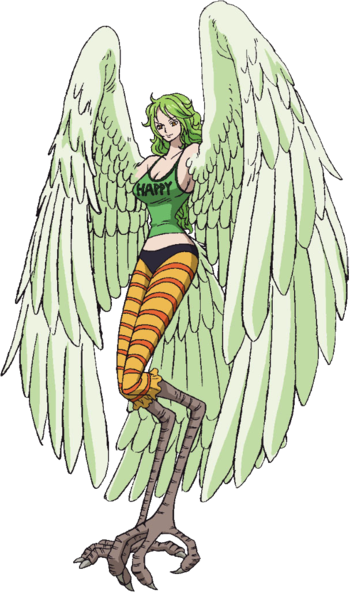 A harpy and personal assistant to Caesar Clown on Doflamingo's orders. She has eaten the Snow-Snow Fruit (Yuki Yuki no Mi) that allows her to control and turn into snow.

The Donquixote Pirates' special officer of the Trebol Army, the special powers division. Due to her powers, she was a vital element of Doflamingo's operations and, as such, she was heavily protected. She was the main target of Operation SOP, devised by the Thunder Soldier and the Dwarves. Sugar has eaten the Hobby-Hobby Fruit (Hobi Hobi no Mi), which allows her to turn anyone she touches into a toy; her victims are immediately forgotten by everyone who once knew them, and she can further take control of them once they are toys and use them as soldiers or servants. 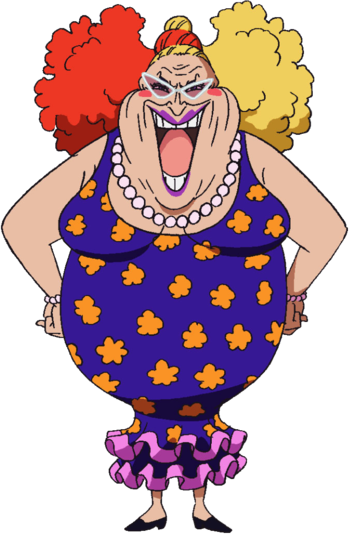 One of the officers of the Trebol's army of the Donquixote Pirates. She's an old woman with a very large ego and a passion for art. She has eaten the Art-Art Fruit (Ato Ato no Mi), which gives her the ability to make thought bubbles that turn everything they touch into distorted pieces of art.

In the Dressrosa Arc, she assaults the Thousand Sunny, turning the ship and everyone on board (Nami, Brook, Chopper, and Momonosuke) into abstract art, making them useless in combat. Until Brook tricks her and, with the help of Nami, defeats her, turning everything back to normal.

Later she tries to use Mansherry's Heal-Heal Fruit to heal the other defeated officers. By the end of the arc, she's arrested along with the other Donquixote Pirates.

Violet
See her entry in the Dressrosa page. 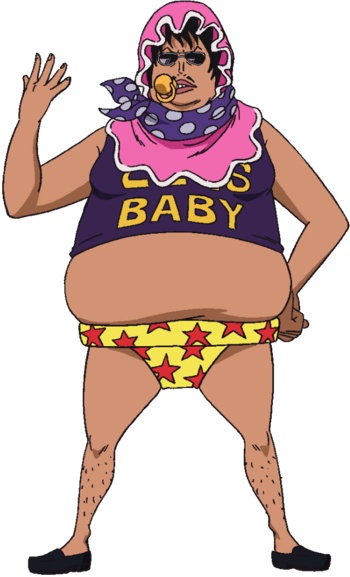 "It's a mean-looking sky today. If I keep flying, I could see Russian again..."

One of the officers of the Diamante Army, the fighting division, of the Donquixote Pirates. He has eaten the Swim-Swim Fruit (Sui Sui no Mi), which allows him to swim on the ground or on walls.

One of the officers of the Donquixote Pirates (and the oldest one), in Diamante's army, the fighting division. He's a calm and analytical man, but also very senile since he needs glasses to see the dwarves and has trouble hearing. His fighting abilities are still top notch, though. He doesn't have any Devil Fruit, but can use a special martial art called "Battle Preservation Fist" (Jio-Ken) that makes the user much stronger and to not feel any pain despite their age.

During the Dressrosa Arc, he defends the entrance of the SMILE factory (preventing the dwarves from entering it) until he moves to the King's plateau, where he defeats Don Chinjao. After the events of Dressrosa, he's arrested along with his crewmates.

On of the officers of the fighting division, Diamante's army, and the youngest among all the officers. He's a young half-human half-Fishman (fighting fish type) with a really effeminate personality, but becomes bloodthirsty if he's involved in a fight.

During the Dressrosa Arc he mocks Bellamy and his devotion to Doflamingo, saying he has never been important. However, thanks to Bartolomeo, he cannot finish him and is later seen defending the entrance of the SMILE factory, along with Machvise, Senior Pink and Lao G. During the battle on the King's Plateau, he fights and defeats Suleyman, Blue Gilly, and Ideo before being defeated by Hakuba.

After the events of Dressrosa, he's captured along with the rest of the crew. 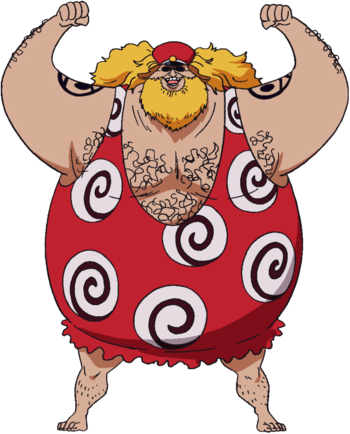 One of the officers of the Donquixote Pirates, a member Diamante's army. He's compassionate towards his crewmates, to the point of being concerned about Baby 5 after Gladius shoots her, but in battle he's a cruel and merciless fighter. He has eaten the Ton-Ton Fruit (Ton Ton no Mi) which allows him to alter his weight, only that he cannot become lighter but only heavier, much heavier, even up to 10.000 tons.

During the Dressrosa Arc, he defends the entrance of the SMILE factory along with the rest of Diamante's army. Later, on King's Plateau, he fights Boo and then Hajrudin.

At the end of the arc, he's arrested by the Marines like the rest of the crew.

One of the officers of Pica's army, the commando division, of the Donquixote Pirates. He has a really short temper and is not forgiving of those who fail him or don't follow orders. He's also one of Doflamingo's most devoted subordinates. He has eaten the Pop-Pop Fruit (Pamu Pamu no Mi) which gives him the ability to inflate and explode any non-living object he touches or himself.

During the events of Dressrosa, he fights Bartolomeo, Cavendish and Nico Robin. He's then arrested by the Marines along witht the rest of the crew.

Baby 5
Since she has defected the Donquixote Pirates, see her entry in Straw Hat Grand Fleet.
Buffalo 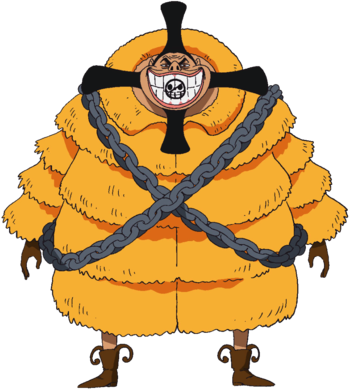 One of the officers of Pica's army of the Donquixote Pirates. He's been a member of the crew since he was young and is therefore very loyal. He's also a compulsive gambler, and often asks to borrow money from Baby 5. He has eaten the Spin-Spin Fruit (Guru Guru no Mi), which gives him the ability to rotate any part of his body.

He's first seen going on a mission to Punk Hazard with Baby 5 to retrieve Caesar Clown, where they fight Franky but are ultimately defeated, and Nami and Usopp prevent them from escaping. He's sent back to Doflamingo by Trafalgar Law to intimidate the Warlord and send his ultimatum.

In Dressrosa, Buffalo is in the palace when Kyros attacks and decapitates one of Doflamingo's string puppets but, believing it is the true one, he attacks Kyros in revenge. The latter dispatches him easily, making him the first officer to be defeated. Then he gets arrested along with the crew. 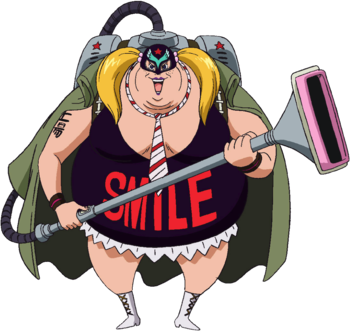 She's the boss of the SMILE factory in Dressrosa, and is seen attacking the dwarves that have gotten in until Franky slams her with a suplex and shuts her up with a kiss.

She then watches the fight between Franky and Senior Pink, impressed by all their manliness.

Bellamy the Hyena
Previously an ally, becomes an official member after his crew is decimated and disbanded. However, he learns that Doflamingo doesn't care about him and leaves the crew.