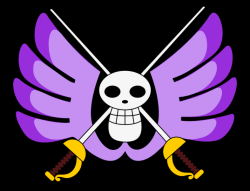 Baroque Works is a fearsome organization of bounty hunters based in Paradise. Under their official job as bounty hunters, Baroque Works' ultimate goal is to take over the Kingdom of Alabasta . The agents have all code names based on numbers (men) or days (women) and can count on a large number of mostly nameless mooks. The Officer Agents are the strongest members, as almost all of them ate a Devil Fruit. They and their respective partners have ranks from 1 to 5. Beneath them are the Frontier Agents, who have ranks from 6 to 13, and further beneath the unranked members, the Billions. They are the main antagonists in the Alabasta Saga.

Following the end of the Alabasta civil war, most of them were arrested and the Officers put in prison. Most of the Officers subsequently escaped to live a peaceful life, whereas Mr. 0, Mr. 1, Mr. 2 and Mr. 3 were transferred to Impel Down, which they managed to escape from anyway during the Impel Down breakout incident, sans Mr. 2.

Their leaders are Mr. 0 (aka Crocodile) and Miss All Sunday (aka Nico Robin).

The highest ranking Baroque Works officer (excluding Mr. 0), paired up with Miss Doublefinger. He is cold and collected and is a former bounty hunter and assassin, although he really doesn't get along with Mr. 2. He's also the most loyal of the subordinates, and the only one still working for Crocodile. He has eaten the Dice-Dice Fruit (Supa Supa no Mi) which allows him to turn any part of his body into a steel blade.

In the Alabasta arc, he engages in "Operation Utopia" and fights against Zoro, where he's defeated and sent to Impel Down. Later he escapes thanks to Luffy's intrusion, and after the Summit War, he decides to follow Crocodile in the New World.

Mr.1's partner and the highest ranking female member of Baroque Works, with the exception of Miss Sunday. Like her partner, she's calm and professional, although feels sorry for Nami's awkwardness with her new weapon. She has eaten the Spike-Spike fruit (Toge Toge no Mi) who gives her the ability to grow spikes able to pierce walls on all her body or turn her body parts in big spikes.

She's introduced as a barista named Paula (which is not her real name) before revealing herself as Miss Doublefinger. After the events of Alabasta she's captured but, before she could be taken to Impel Down, Miss Goldenweek, along with Mr. 5 and Miss Valentine, helps her escape and she re-opens the Spider Cafe to work as a barista (this time for real). 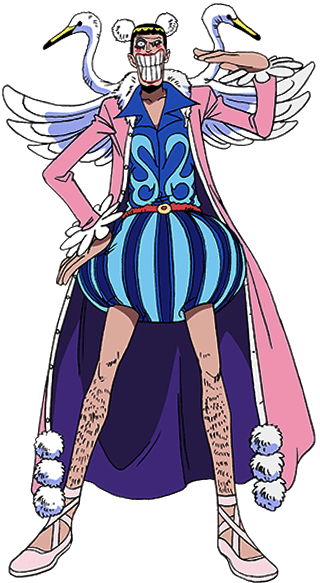 Mr. 2 Bon Clay (or "Bon Kurei") is one of the more eccentric characters in the series, and that's saying something. A transvestite with a dance-based fighting style called Okama Kenpo (Crossdresser Martial Arts), the Clone-Clone Fruit (Mane Mane no Mi) that enables him to copy others' appearances, and an incredibly fruity and over the top personality, he is much more dangerous than he may appear, as he was the sole member of the second highest tier of the Baroque Works Officer Agents. Mr. 2 is prone to breaking out in song and twirling around, annoying those nearby to no end, and he shows a surprising level of loyalty towards his friends. And if you're wondering why he has no female calendar-themed partner, he's equal parts man and woman all by himself- and that's without using his Devil Fruit to pose as an actual girl.

He first met the Straw Hats while they were en route to Alabasta after he had fallen overboard off his own ship, and got along quite well with the more easily amused Luffy, Chopper, and Usopp. After being defeated by Sanji, he was deeply moved by what he saw as an gesture of sportsmanship, resulting in him and his flunkies distracting the Marines long enough for the Straw Hats to escape Alabasta. Afterwards, after a series of misadventures, Mr. 2 was eventually arrested and sent to Impel Down.

During Luffy's attempt to rescue Ace, he was freed and ended up fighting alongside him, Buggy the Clown, and fellow Baroque Works agent Mr. 3. After Luffy was defeated by the warden Magellan and left to die in Level 5, Mr.2 set out to save him and find the imprisoned Emporio Ivankov, a transvestite king who allegedly had miraculous healing powers, dragging the unwilling Buggy and Mr.3 along for the ride as well. Afterwards, in a truly epic Tear Jerker moment, he stayed behind and disguised himself as Magellan so that the Gates of Justice would open and the rest of his comrades could escape.

Fortunately, as fate would have it, Impel Down Level 5.5 is now led by a new crossdresser who is raising a second wave of resistance against the dungeon-like prison, and it's almost certainly implied to be him.

Mr. 3 / "Loan Shark" Galdino
After escaping from Impel Down, he has joined the Buggy Pirates, so you can find his folder here.
Miss Goldenweek / "Flag-Bearer of Freedom" Marianne

Mr. 3's partner. She's not much suited for combat and generally just gives support to her partner (such as painting his wax statues), with whom she gets along, but is able to use a special technique known as Colors Trap which allows her to control a person's behavior by drawing a symbol either next to the subject (contact is required) or directly on him/her. The effect depends upon the color used.

After the events of Little Garden, she's not seen until her own starring mini-adventures, which take place after the Alabasta's arc. She, with the help of Mr. 5 and Miss Valentine, frees some of her fellow Baroque Works members. 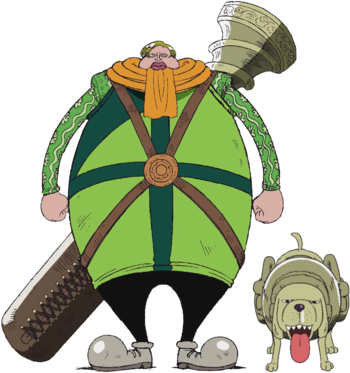 Mr. 4 on the left, Lassoo, his dog-bazooka, on the right

One of Baroque Works' officer agents. He's partnered with Miss Merry Christmas and, in contrast to the latter Motor Mouth, he's very slow and dimwitted. He rarely takes any initiative and is his partner the duo's driving force.He's very strong, able to wield a four ton baseball bat and has a bazooka named Lassoo which has (somehow) eaten the Dog-Dog Fruit (Inu Inu no Mi), Model: Dachshund, turning it into a bazooka-dog that sneezes explosives baseballs.

After the Alabasta's arc, he's captured but escapes before reaching Impel Down thanks to Miss Goldenweek and begins to work as a pizza delivery boy at the new Spider Cafe. 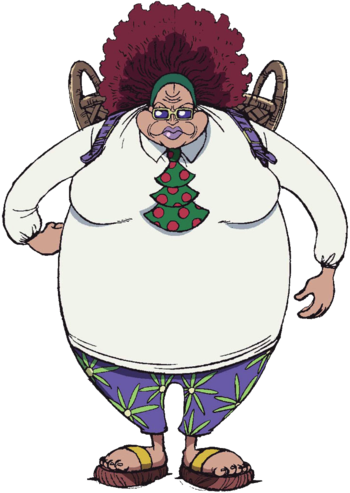 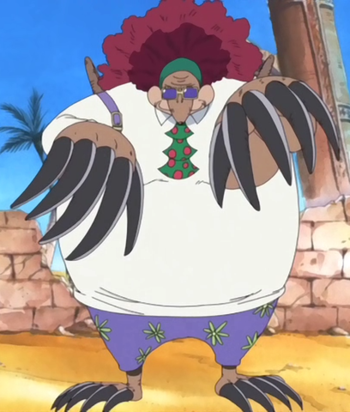 One of Baroque Works' officer agents and Mr. 4's partner. She has eaten the Mole-Mole Fruit (Mogu Mogu no Mi) which grants her the ability to turn into a human-mole and dig large tunnels.

After the events of Alabasta, she's captured but escapes with Miss Goldenweek's help and begins to work in the new Spider Cafe as a princess-waitress.

The lowest ranked officer agent and Miss Valentine's partner. He has eaten the Bomb-Bomb Fruit (Bomu Bomu no Mi) who turned into a human-bomb and allows him to make any part of his body explode (even his breath and mucus).

He first appears on Whiskey Peak and Little Garden along with Miss Valentine, where he poses as a small threat. After the Alabasta Arc, he and his partner Miss Valentine assist Miss Goldenweek in helping some of his fellow Baroque Works members escape and later begins to work as a firefighter.

The lowest ranked female officer agent and Mr. 5's partner. She has eaten the Kilo-Kilo Fruit (Kilo Kilo no Mi), which allows her to change her weight from 1 to 10,000 kilos.

Along with her partner, she appears in Whiskey Peak and Little Garden, posing as a small threat to the Straw Hats. After the events of Alabasta, she and Mr. 5 help Miss Goldenweek free some of her fellow Baroque Works members and then she begins work as a chocolatier. 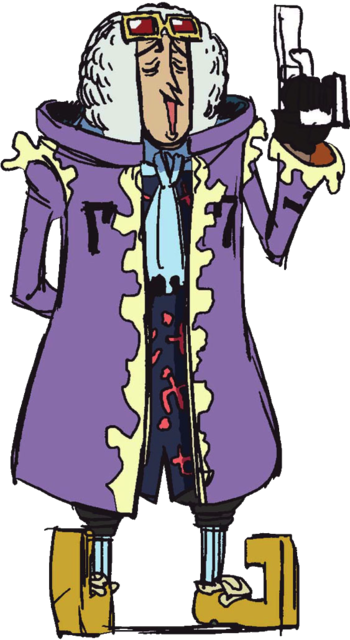 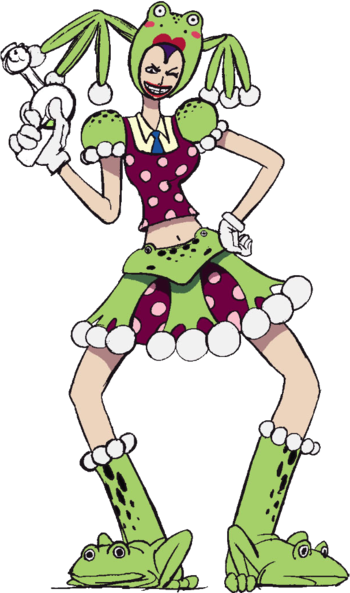 Both use a gun as Weapon of Choice and appear at the end of the Alabasta Arc, where they are responsible for protecting the bomb that would destroy the entire city, but are stopped and defeated by Vivi.

Mr. 8
Miss Monday's partner, who is actually Igaram who infiltrated Baroque Works along with Vivi. See his entry on the Paradise page.
Miss Monday

One of the frontier agents, and Mr. 8's partner. She's a strong woman with a soft high-pitched voice.

She appears at Whiskey Peak where she is at first disguised as nun. She later fights Zoro, who easily overpowers her. When she learns that her partner and Miss Wednesday are spies from Alabasta, she faces Mr. 5 and Miss Valentine to buy them some time. After the two year time skip, she's seen still living in Whiskey Peak, married to Mr. 9 and with a child. 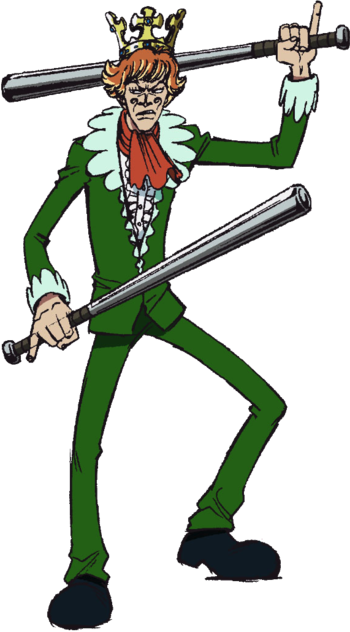 One of Baroque Works's Frontier Agents, paired with Miss Wednesday.

Once Mr. 5 and Miss Valentine arrive in Whiskey Peak to capture Vivi and Igaram, he faces them off to buy his ex-partner some time. After the timeskip he's seen living at Whiskey Peak, married to Miss Monday and with a child.

Miss Wednesday
Mr. 9's partner, who is actually Nefertari Vivi who infiltrated in the Baroque Works. See her on the Paradise page.
The Unluckies

Mr. 13 and Miss Friday, respectively an Otter and a Vulture. Despite being the lowest ranked agents, above the Billions, they are feared even by their supposed superiors. They are Mr. 0's messengers and are responsible for executing whoever fails a mission. They also have the job of making portraits of Baroque Works's enemies. 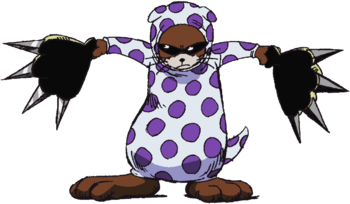 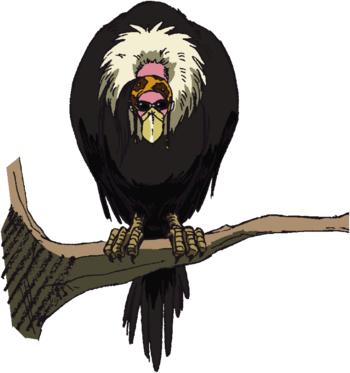