Amazon Lily
"The nation of Kuja is a tribe of woman warriors. This is Amazon Lily, the island of women. Men are absolutely forbidden. If any man sets foot on this island, he forfeits his life.'"
—Chapter 514
Advertisement:

Amazon Lily is an empire populated by an all-female tribe called the "Kuja", located on the Island of Women in the Calm Belt. Since there are no men in their tribe and they're quite isolated from the rest of the world, Kujas tend to be ignorant and diffident about males, although some do leave the island and come back pregnant (and always with female children). Their culture resembles that of the Amazons and they are ruled by their empress Boa Hancock, who became a member of the Seven Warlords of the Sea to protect her island.

Every Kuja is quite strong and has some proficiency with Haki, and most of them wear really revealing outfits. Their most common weapon is a snake companion that can become a bow or a staff. However, only the strongest of them are part of the Kuja Pirates. 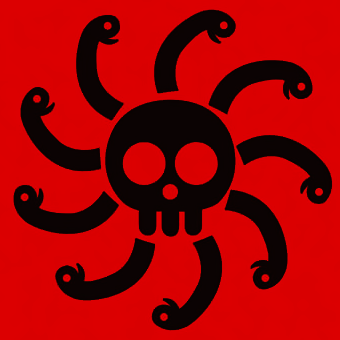 Hancock's pirate crew, composed by the strongest and toughest Kuja warriors from Amazon Lily. Their power is known and feared among the people, and they can all use Haki. Because of Boa's open unruliness, they are just as likely to attack Marines as they are other pirates. Moreover, the Sea Serpents they use to pull their ship intimidates Sea Kings, meaning they can freely sail through the Calm Belt, giving an exceptional natural defense to their island. Still, after meeting Luffy, they have become secret allies to the Straw Hats.

"Pirate Empress" Boa Hancock
Empress of Amazon Lily, leader of the Kuja Tribe, captain of the Kuja Pirates and one of the Seven Warlords of the Sea. See her page.
Boa Sandersonia

Known as Sonia for short, she's Boa Hancock's little sister, though you might not guess it comparing their heights. She's the middle child of the Gorgon Sisters. Along with her sisters, she was a slave of the World Nobles and was freed by Fisher Tiger; since then, she and her sisters have been living a lie about why their backs cannot be shown, claiming that they have Gorgon eyes on their backs and anyone who sees them turns to stone, when in actuality they have "The Hoof of the Celestial Dragon" on their backs, marking them as property of the World Nobles.

She's the most emotional of the sisters, as she's usually quite cheerful but at the same time bursts into crying much more easily when thinking about her past. While in combat, she teases and torments her opponent. She and Marigold are very devoted to their older sister Boa Hancock, and will support her in any of her decisions.

She's one of the elite Kuja warriors, and has eaten the Snake-Snake Fruit (Hebi Hebi no Mi), Anaconda Model (although not by choice) which allows her to become a large and strong woman-snake. She's also proficient in Observation Haki, to the point of being able to easily dodge Luffy's Gatling Gun attack, and can control her hair to shape them into snakes. 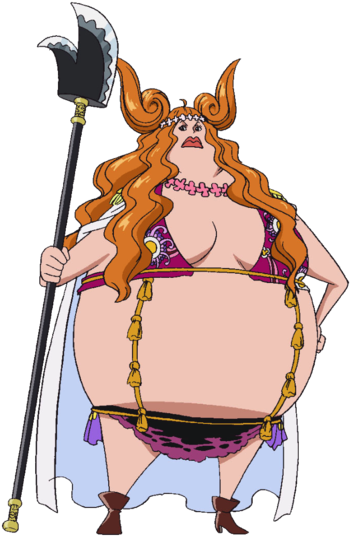 Known as Mari for short, she's Boa Hancock's little sister, though "little" might not be the right word. She's the youngest of the Gorgon Sisters. Along with her sisters, she was a slave of the World Nobles and was released by Fisher Tiger; since then, she and her sisters have been living a lie about why their backs cannot be shown, claiming that they have Gorgon eyes on their backs and anyone who sees them turns to stone, when in actuality they have "The Hoof of the Celestial Dragon" on their backs, marking them as property of the World Nobles.

She's the most stern of the Gorgon Sisters, and only shows some emotion when she's being slightly playful in combat. She's very devoted to her older sister Hancock to the point of following her in any decision.

She's one of the elite Kuja warriors, and wields a giant Guandao. She has eaten the Snake-Snake Fruit (Hebi Hebi no Mi), King Cobra Model (although not by choice) which allows her to become a large woman-snake and spit poison in her hybrid form. She's also proficient in Armament Haki, and is able to hurt Luffy with blunt attacks, and can control her hair, shaping into snakes and even set them on fire.

A member of the Kuja who happens to find Luffy after he lands on Amazon Lily, along with her friends Sweetpea and Aphelandra. Due to not having met any man before Luffy, she's very naive about them, and there's the Running Gag of her wishing to see Luffy's "golden balls" (Japanese slang for male testicles). Like all Kuka, she was initally mistrustful of Luffy since he was a man. However, as time goes on, she forms the closest attachment to Luffy of the three, especially after he saves her in the arena trial.

She fights using a snake that can turn into a bow to shoot Haki-imbued arrows. She's also seen using a dagger.

She joins the Kuja Pirates during the Time Skip. 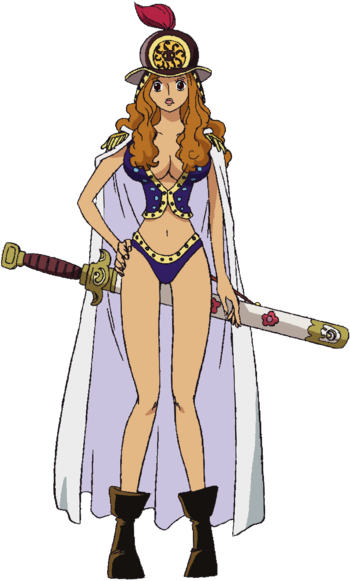 A member of the Kuja tribe, arguably the tallest besides Sandersonia and Marigold, and one of the three who find Luffy after he lands on Amazon Lily. Like the other two, she forms a close attachment to him after he saves them. She's a kind and innocent woman and is also shy and submissive despite her size. She responds to orders and requests in a very militaristic manner, complete with right-handed salute.

She wields a large Jian sword proportionate to her size and apparently is proficient enough to join the Kuja Pirates during the Time Skip. 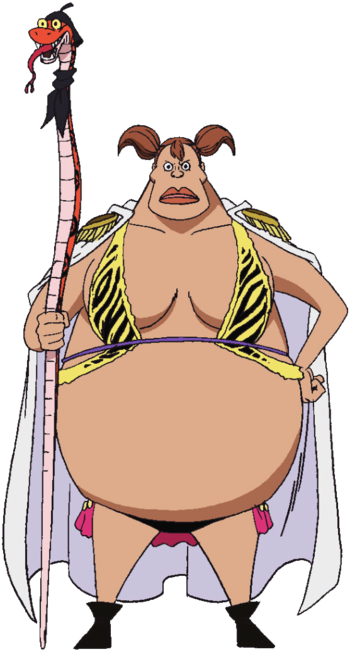 A member of the Kuja tribe, and one of the three who find Luffy and gets on good terms with him after he saves her, Marguerite, and Aphelandra. She has a funny habit of describing the events she's living with complex quotes, as if she's writing a novel.

After the Time Skip, she becomes a member of the Kuja Pirates.

A member of the Kuja pirates. She's among the most knowledgeable and analytical member of the crew, as seen when she commentates Luffy's fights in the arena.

She has a snake that can morph into a bow and use it to shoot arrows and, like all Kuja, is a Haki user.

One of the Kuja Pirates. She's always seen smiling and ends every sentence with her laugh "Zahahaha".

She's never seen fighting, though, being a Kuja Pirate, she must be one of the strongest Kuja. 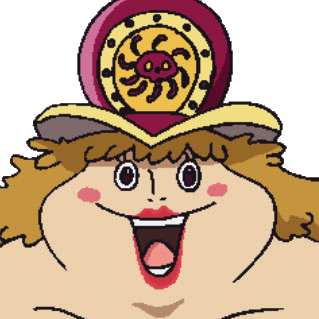 One of the Kuja Pirates. She's a fat and cheerful woman.

Her abilities are never shown, but she should be strong if she's a Kuja Pirate.

One of the Kuja Pirates. She's very aloof, but also loyal and respectful toward her duties.

She's the best sniper of the Kuja Tribe. Instead of the common snake-bow, her weapon is a large bazooka rifle.

Those who aren't members of the Kuja Pirates remain in Amazon Lily, and thus have little knowledge about the outside world. While not as strong as the Kuja Pirates, they're still proficient warriors.
"Elder Nyon" Gloriosa 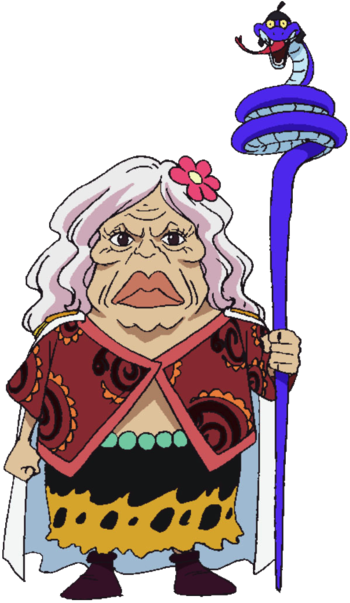 Commonly referred to as "Elder Nyon", she's the ex-ex-ex-empress of Amazon Lily. She's an elderly lady who lives on the outskirts of Amazon Lily, as a consequence of leaving the island and abandoning her duties, after she came down with "love sickness", and somehow surviving when her predecessors didn't. However, during her time away, she learned several things about the world outside the isolated island, including about the opposite gender (and is the only not misandrist Kuja), the politics of the world and she also met a member of the Roger Pirates, Silvers Rayleigh and Shakuyaku; and discovered Boa Hancock and her sisters, Sandersonia and Marigold, who were previously missing for four years after they were enslaved by the Celestial Dragons, taking care of them and eventually bringing them back home. For this reason she's very close to Boa Hancock and cares about her despite the latter's constant mistreatment of the old lady.

Thanks to all of her experience of the outside world, she's very wise, and doesn't believe to (most) of Hancock's lies. Gloriosa takes her role as a senior figure to the Kuja Amazons very seriously, and is something of an adviser to the current empress "Snake Princess" Boa Hancock (despite their often antagonistic relationship), and her interest in current affairs keeps Hancock informed; important considering her Warlord position. When Luffy arrives on the island, she's surprised by his spirit, his luck and his kindness. She informs Luffy of Ace's execution, and warns him of the dangers that follow, and is surprised to see him survive both Impel Down and the Whitebeard War in two days.

One of the Kuja Warriors. She's a serious and severe leader, although she deeply cares for her friends and panics when Sonia is about to crush Marguerite. She's the one more opposed to Luffy's presence, to the point she wants to kill him. Even after Luffy has become a friend of the Kuja, she still doesn't like his antics.

She uses a snake that can become a bow, and by using Haki she can turn her arrows into explosive projectiles.

The doctor of Amazon Lily. She's smart, as she can deduce that the Gorgon Sisters' power don't originate from killing a gorgon, and, fittingly for her role, has wide medical knowledge and is able to quickly heal Luffy after his body is infected by mushrooms while keeping her cool, although she doesn't understand the cause of Boa Hancock's sickness (actually love).

A member of the Kuja tribe who's very curious about men. Upon meeting Luffy, she takes note of everything about him and uses him as a standard for all other men, to the point that she starts to believe that all men are made of rubber.