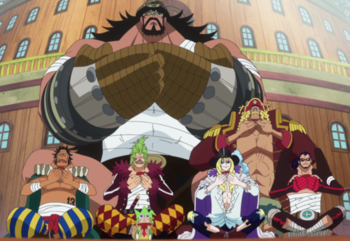 The Captains of the Grand FleetCharacters Counterclockwise from the right: Ideo, Orlumbus, Hajrudin, Don Sai, Bartolomeo, Leo, and Cavendish.

In the aftermath of Operation SOP in Dressrosa, the Straw Hat Grand Fleet was formed from pirates, Dwarves, Giants and assorted criminals, most of whom were original participants in the Corrida Colosseum who helped the main Straw Hat crew defeat Doflamingo. Despite the fleet's name, they're not part of the main Straw Hat crew and, in fact, they're their own separate crews, but they're technically under Luffy (whether he likes it or not). The number of each division was decided via lottery. 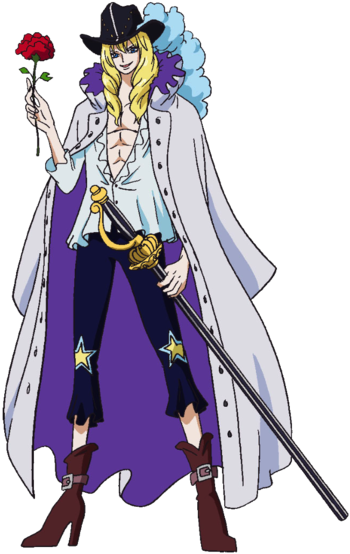 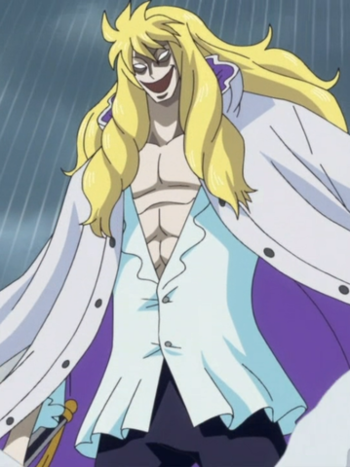 [...] If he's made one mistake... it was soliciting and gathering this assortment of powerful and belligerent miscreants for the coliseum!!! We will not be subdued!!! And most importantly... I will be the one to strike down Doflamingo!!!

A Super Rookie and the captain of the Beautiful Pirates, Cavendish is an incredibly pretty-looking young man who dresses like a dandy cavalier. He made a name for himself after he made it to the New World, but after the events of the Battle of Marineford and being overshadowed by the rookies of the "Worst Generation", he holds a grudge against Luffy and the other Supernovas for stealing his spotlight away from him. He enters the Corrida Colosseum hoping to win the Flame-Flame Fruit.

Underlying the vain exterior of Cavendish is a radically different second personality, "Hakuba", a demon-minded killer. It tries to awaken whenever he sleeps, which causes Cavendish to suffer from narcolepsy and lethal sleepwalking. Hakuba is a blindingly fast, hellacious, and utterly bloodthirsty monster who cuts down everything he sees, responsible for a horrible series of massacres in the faraway Rommel Kingdom. It was because of this everyone believed it was the wind that was slashing people, and the phenomenon became known as the "Kamaitachi (Slicing Winds) of Rommel". Cavendish is often besieged by Hakuba's attempts to take over and must wrestle for control over his own body with his psychotic other self.

Despite his grudge against the Worst Generation, once turned into a toy by Sugar, he quickly allies himself with Luffy after Usopp frees him.

He has a bounty of 330,000,000 Berries. After Doflamingo's defeat, he and his crew become (through lottery) the 1st division of the Straw Hat Grand Fleet. It's only fitting that the person who loves the spotlight the most ends up being number one. 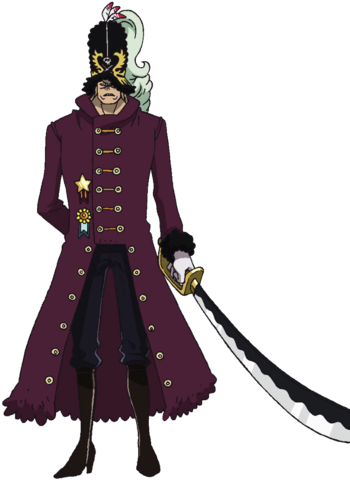 An A-rank war criminal who participates in the Corrida Colosseum tournament. He eventually joins the Beautiful Pirates, under Cavendish, despite not being quite beautiful.

A Super Rookie and the captain of the Bartolomeo Club that became a contender of the Corrida Colosseum. He won the Block B battle and basically acts like a Heel. He has eaten the Barrier-Barrier Fruit (Bari Bari no Mi), which allows him to generate indestructible barriers at will.

Despite his rough appearance, he is actually an extremely enthusiastic and dedicated fanboy of none other than the Straw Hat Pirates (Luffy and Zoro in particular), having followed their exploits since their time in Logue Town. So naturally, when he finally meets them in Dressrosa, he makes for an immediately valuable ally in the fight against Doflamingo.

His epithet, "Man-Eater", deserves some slight explanation. He doesn't (as far as we know) have a penchant for eating human flesh; instead it's a Japanese saying that references the fact that spending time with Bartolomeo, who is incredibly abrasive and annoying, is roughly akin to him slowly eating you alive.

He has a bounty of 200,000,000 Berries. After Doflamingo's defeat, he and his crew become, through lottery with their allies, the 2nd division of Luffy's fleet.

Other Members of the Barto Club
The Barto Club itself originally was a street gang situated at Loguetown. After following Luffy's exploits all the way to the Whitebeard War, they decide to go from gangsters to pirates and head out to sea. Unfortunately, because they didn't have any naval training, they aren't prepared when dangerous situations occur at sea. 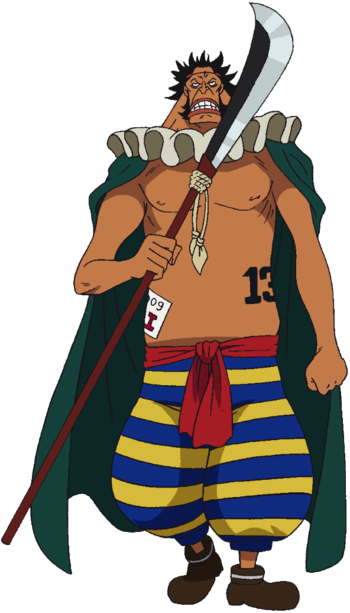 The elder son of Don Chinjao, a member of the Chinjao Family and the 13th leader of the Happo Navy. He is a participant in the Corrida Coliseum along with Chinjao and his brother Boo. The three have a hidden agenda to investigate a weapons trade that the Donquixote Family was involved in.

Once his grandfather pledges his loyalty to Luffy, Sai quickly follows suit and helps in the battle against Doflamingo. After proving of being stronger than his grandfather, Don Chinjao, the latter nominates Sai the new leader of the Happo Navy.

After Doflamingo's defeat, he and the Happo Navy become, through lottery with their allies, the 3rd division of Luffy's fleet. 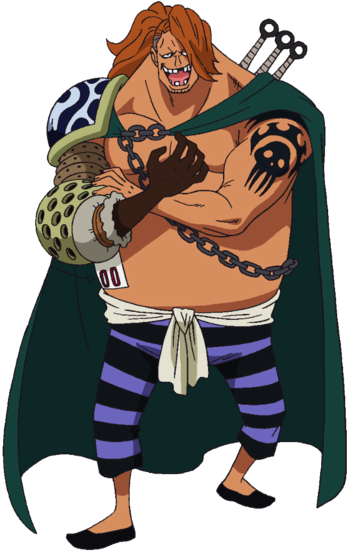 Don Chinjao's younger grandson, a member of the Chinjao Family and vice-leader of the Happo Navy under Sai. He participates in the Corrida Colosseum tournament but gets defeated by the Funky Brothers. 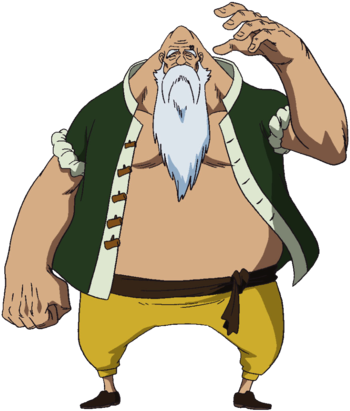 "Nonsense! There are countless souls on the sea ahead with the quality of a king. That title is decided by 'them'. Only he who stands atop those supreme kings can be called the King of the Pirates!!!".
—Chapter 717

A former pirate and leader of the Happo Navy and a participant in the Corrida Colosseum. He holds a grudge against Garp for having squashed his characteristic pointy head. He extendes this grudge onto his grandson Luffy, but Luffy accidentally makes his head pointy again and Chinjao vows loyalty to him. After seein that his grandson Sai has surpassed him, Don Chinjao decides to retire and nominates Sai the new leader of the Happo Navy.

Despite his age, Don Chinjao is still a formidable fighter, proving to be Luffy's first true challenge of the New World, and mainly fights using his head which, in the past, was pointy and strong enought to split an entire continent. He's also one of the few who possesses Conqueror's Haki. 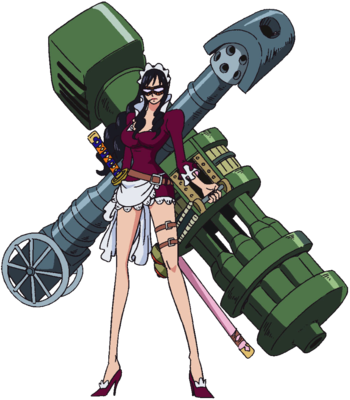 Baby 5 is a character who is originally introduced as a servant and assassin of the Donquixote Pirates. Specifically, she's an officer of the Pica Army, the commando division. She has eaten the Arms-Arms Fruit (Buki Buki no Mi) that allows her to turn her body(parts) into any kind of weapon she likes.

She later defects from the Donquixote Pirates prior to their downfall after Sai vows to make her his wife if he defeats Lao G.

"We’re all in this together... Because in this world... Victory can never be attained alone, Kiddo!!."

One of the participants of the Corrida Colosseum's tournament for the Flame-Flame Fruit. A triple-X ranked Boxer who has won the New World Central Fighting Tournament twice. He's also part of the Longarm Tribe.

A blue-haired member of the Longleg Tribe and an accomplished martial artist who participated in the Corrida Colosseum tournament for the Flame-Flame Fruit. 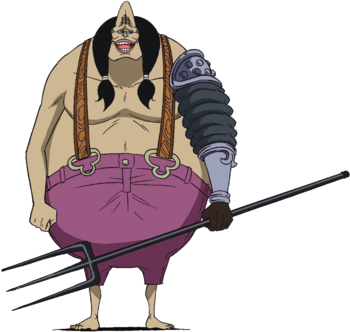 A criminal who alongside Jeet used to be a bounty hunter and participates in the Corrida Colosseum tournament. 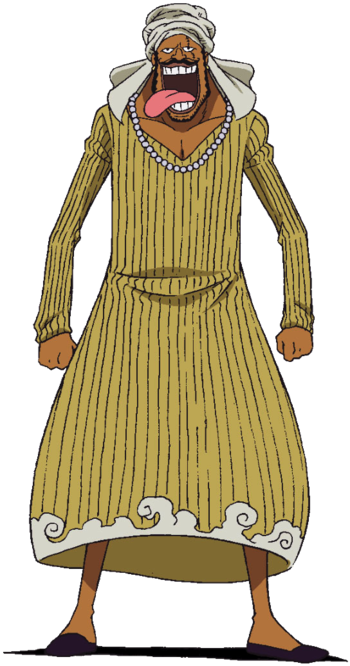 A criminal who alongside Abdullah used to be a bounty hunter and participates in the Corrida Colosseum tournament. 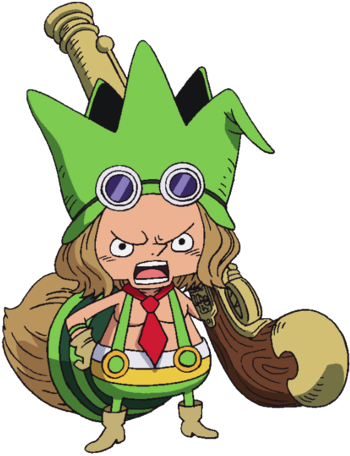 Why isn’t anyone doing anything about this-resu!? How dare you do that to a friend of our boss!!"

The top warrior of the Tontatta, a tribe of Dwarves that lives on Green Bit. He leads the Dwarves against Doflamingo in order to liberate Dressrosa and 500 other Dwarves, including their princess Mansherry, that were captured and enslaved to work in Doflamingo's SMILE factory. He has eaten the Sew-Sew Fruit (Nui Nui no Mi) which allows him to sew things together without causing any harm to the things in question.

After Doflamingo's defeat, he with several Tontatta become, through lottery with their allies, the 5th division of Luffy's fleet. 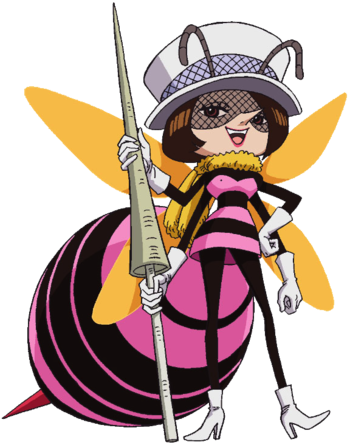 A member of the Tonta Corps who serves as the leader of the Pink Bee Squad. She has eaten the Bug-Bug Fruit (Mushi Mushi no Mi), Model: Hornet. 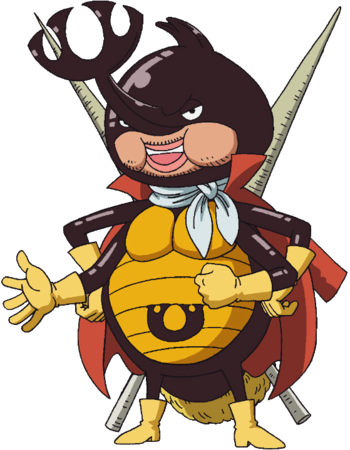 The leader of the Yellow Kabu Squad. He has eaten the Bug-Bug Fruit (Mushi Mushi no Mi), Model: Rhinoceros Beetle. 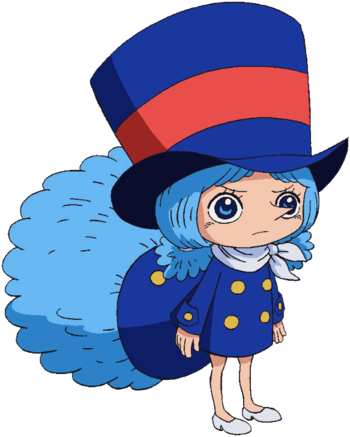 A dwarf in the Tontatta Tribe's Scouting Unit who steals Zoro's sword, eventually leading him to the Tontatta Kingdom. She later becomes a member of the Tonta Corps after the Straw Hats leave Dressrosa.

In General
A pirate crew that consists entirely of giants, led by Hajrudin. After becoming an ally of the Straw Hats, Hajrudin left Buggy's Delivery along with his fellow giant mercenaries.
"Pirate Mercenary" Hajrudin 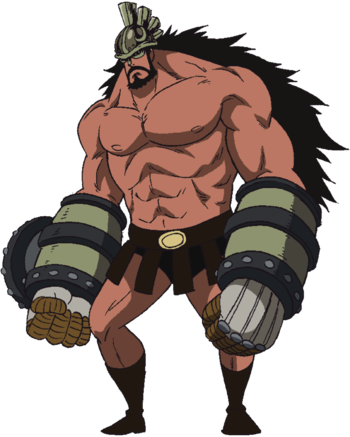 A Giant from Elbaf, part of a new generation of warriors from there. He's a participant of the Corrida Colosseum. He wishes to be king of the Giants and also reform the legendary Giant Warrior Pirates, once led by Dorry & Brogy. He also was a member of Buggy's Pirate Dispatch Organization, being an S-ranked soldier, having since resigned.

After Doflamingo's defeat, he and his crew become, through lottery with their allies, the 6th division of Luffy's fleet. 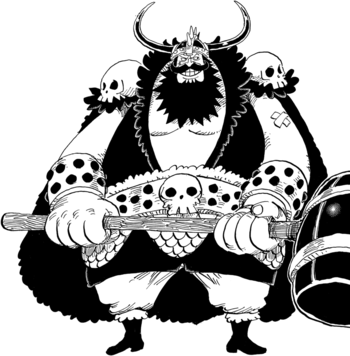 The crew's shipwright. He's first seen as a prisoner in the Auction House in Sabaody until he's saved by Silvers Rayleigh. 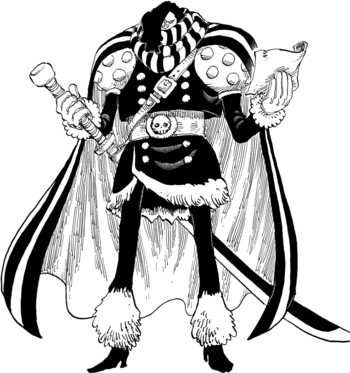 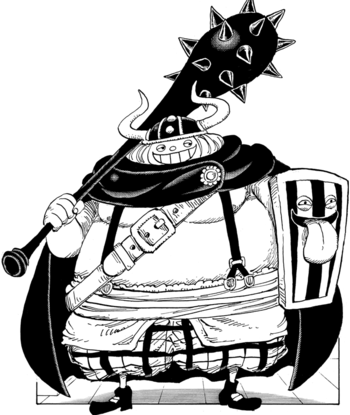 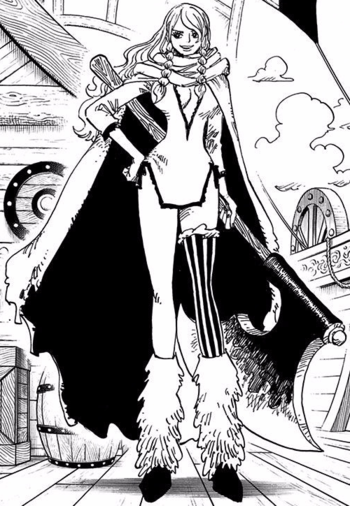 The crew's doctor. During her childhood in Elbaf, she was Big Mom's friend. 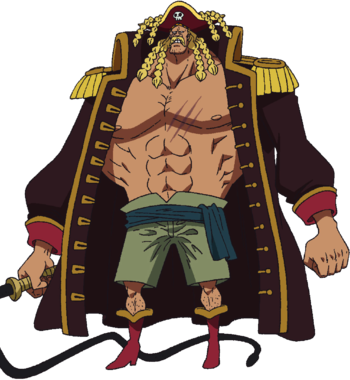 One of the participants of the Corrida Colosseum's tournament. An adventurer and "made-up" explorer who commands the Yonta Maria Grand Fleet, with over 4300 members.

After Doflamingo's defeat, he and his fleet become, through lottery with their allies, the 7th division of Luffy's fleet.

Orlumbus's Number Two and the second in command of the Yonta Maria fleet. In contrast to Admiral Orlumbus, she's a short girl with a very bad temper.