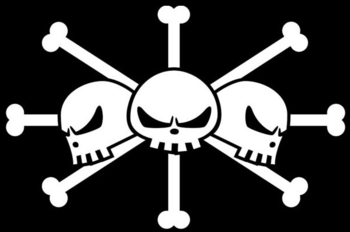 The small yet mighty pirate crew led by the evil pirate Marshall D. Teach, aka Blackbeard, and one of the main antagonist groups in the series. Despite their small size, they're powerful enough to take on a whole kingdom, like the Drum Kingdom (now known as the Sakura Kingdom). First introduced in Jaya, they later reappear on Banaro Island where they capture Ace. After the events of Impel Down, several legendary criminals strengthen the crew. Blackbeard's initial crew members are Van Augur the marksman, Jesus Burgess the helmsman, Doc Q the doctor and his horse Stronger, and Lafitte the navigator. Following the crew's breakout from Impel Down, they recruit Shiryu the swordsman, Catarina Devon, Avalo Pizarro, Vasco Shot, and San Juan Wolf, all former Level Six prisoners and highly feared individuals.

After the Time Skip, Blackbeard has replaced Whitebeard as one of the Four Emperors as confirmed in Chapter 650. He has expanded his crew greatly, to the extent that it is divided into ten divisions, each led by one of his Ten Titanic Captains. They have also established a headquarters on Fullalead, a pirate island community similar to Jaya, where Blackbeard lures powerful pirates with the intent of recruiting them or killing them and stealing their powers should they refuse.

Marshall D. Teach — "Blackbeard"
Commodore of the Blackbeard Pirates and one of the Four Emperors. See his page here.

General
The ten leaders of each of Blackbeard's divisions after he becomes an Emperor of the Sea and his most powerful subordinates. Four of the captains (and the pet horse of one of the captains) are the original members of the crew besides Blackbeard and five are former Level 6 prisoners from Impel Down.
"Champion" Jesus Burgess 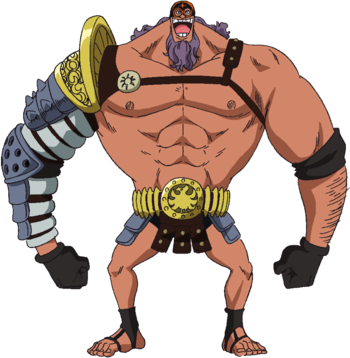 One of the original five members of the Blackbeard Pirates and the helmsman of the crew, Burgess is a large, muscular man and a powerful hand-to-hand fighter with a love of combat. Burgess would become a member of the Ten Titanic Captains and the Captain of the Blackbeard Pirates' 1st Ship upon their ascension to Emperor-hood, and arrived at Dressrossa with the intention of winning the Flame-Flame Fruit for his crew in the Corrida Colosseum tournament.

After Dressrosa, he's given the Strong-Strong Fruit (Riki Riki no Mi), which boosts his already massive strength to monstrous levels.

Shiryu "of the Rain"

Shiryu "of the Rain" 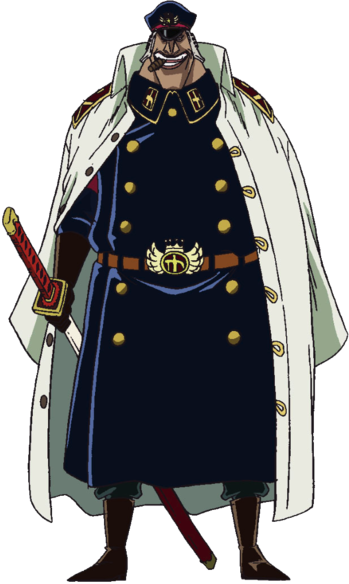 "It's obvious what the future holds for me here. I've been waiting to meet someone like you!"
—Chapter 549

Shiryu was once the Head Jailer of Impel Down. A skilled swordsman, he wields a nodachi named Raiu. He was stripped of his rank, was sentenced to execution, and was placed in Level 6 of Impel Down. Magellan, desperate for help, temporarily releases Shiryu to crush the riot. Instead, Shiryu attacks the workers and cuts off communications. Shiryu saves the Blackbeard Pirates from Magellan's poison and promptly joins the team, eventually becoming the Titanic Captain of the Blackbeard Pirates' 2nd ship.

He possesses the powers of the Clear-Clear Fruit (Suke Suke no Mi), having stolen it from Absalom after killing him, allowing him to turn himself or anything he touches invisible. 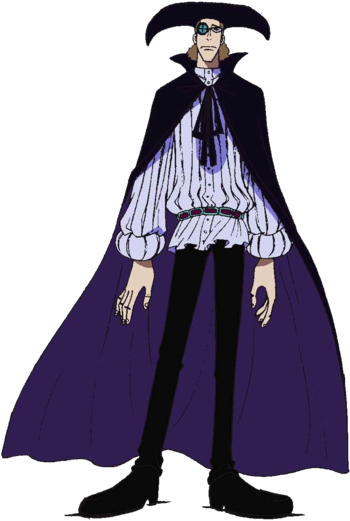 One of the original five members of the Blackbeard Pirates and the group's marksman, Van Augur is a masterful sharpshooter who lives up to his role and epithet, sniping with his large ornate rifle Senriku. Augur is typically reserved and stoic and defers to his Captain. After the Time Skip, he becomes one of the Ten Titanic Captains and the captain of the Third Ship.

Over the Time Skip, he acquires the Warp-Warp Fruit (Wapu Wapu no Mi), allowing him to teleport himself and others at will. 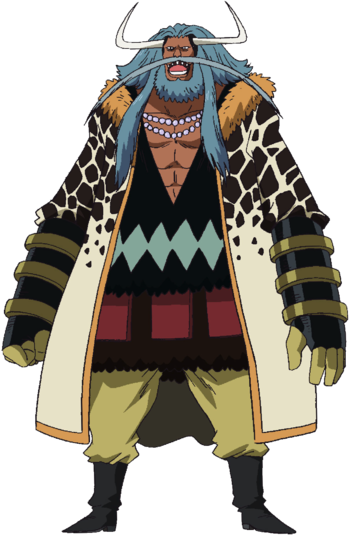 One of the criminals sentenced to Level 6 of Impel Down, Pizarro was a king of a country in the North Blue but was overthrown by his subjects due to his corruption. He's the most cheerful of the Blackbeard Pirates and desires to become the leader despite none of the crew wanting to be his subordinates. He becomes a member of Blackbeard's crew after winning a fight to the death between Level 6's prisoners along with three other prisoners. After the Time Skip, he still seems to be loyal to Blackbeard as the Titanic Captain of his fourth ship. 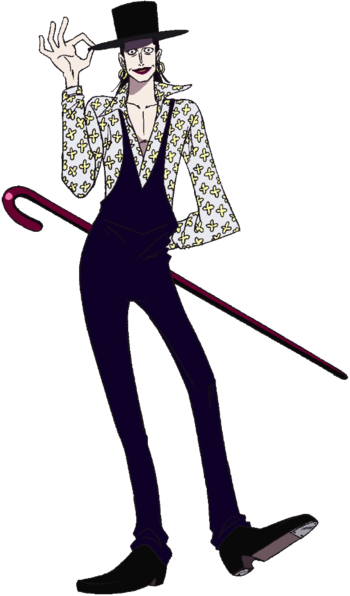 "We are called the Blackbeard Pirates. Please remember that."

One of the original 5 Blackbeard Pirates. The crew's staff officer, Lafitte is also the navigator, a master infiltrator, and one of the more enigmatic members. An effeminate man resembling a mime, he seems to possess powers of hypnosis and has wings that make him capable of flight just like a Skypeian. He used to be a sheriff in the West Blue before being exiled for his brutality and cruelty. He is the man responsible for sneaking into the high-security Marijoa and recommends Blackbeard as the next Warlord. He's also the one who hypnotizes the guards to allow for their infiltration into Impel Down. After the Time Skip, he's granted the position of Titanic Captain of the crew's fifth ship. 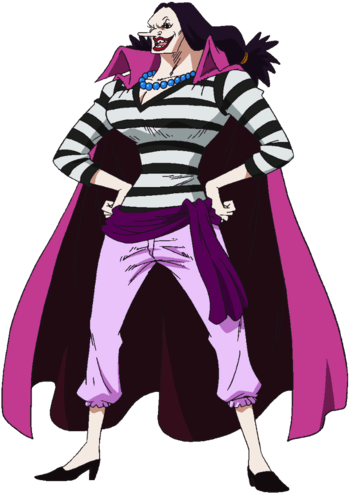 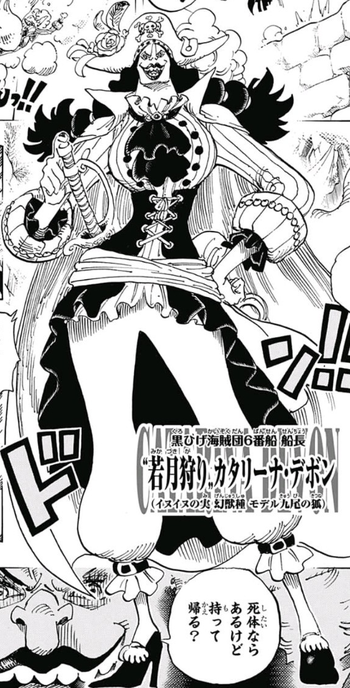 The most dangerous female pirate ever to be imprisoned in Impel Down, Devon is infamous for hunting and decapitating beautiful women to add their heads to her collection in her twisted pursuit of beauty. She has a sense of fashion, as she dislikes her prisoner outfit. She joins Blackbeard's crew after she emerges as one of the four victors of a duel to the death amongst the Level 6 prisoners that Bleackbeard frees, and after the Time Skip, she has become the Titanic Captain of his sixth ship.

She has eaten the Dog-Dog Fruit (Inu Inu no Mi), Model: Nine-Tailed Fox, a Mythical Zoan Devil Fruit that allows her to transform into a nine-tailed fox, granting her the abilities of the legendary beast, one of which is shapeshifting. 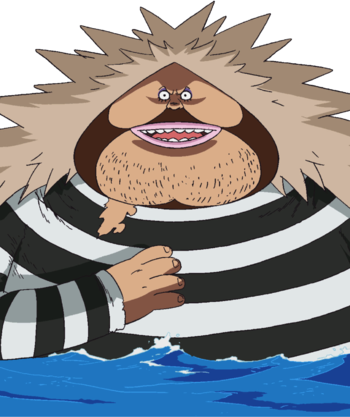 A member of the giant race, and one of the infamous criminals sentenced to Level 6 of Impel Down. He has eaten an unknown Devil Fruit that makes him enormous, even bigger than other giants. Despite his absurd size, he's very shy, to the point of being embarrassed when the Marines notice him hidden behind Marineford's base, and he has a mind like a child's. After being one of the four victors of a duel to the death between the Level 6 prisoners that Blackbeard frees, he becomes a member of the Blackbeard Pirates, later becoming the Titanic Captain of the crew's seventh ship.

He has eaten a Devil Fruit that makes him larger than normal giants. 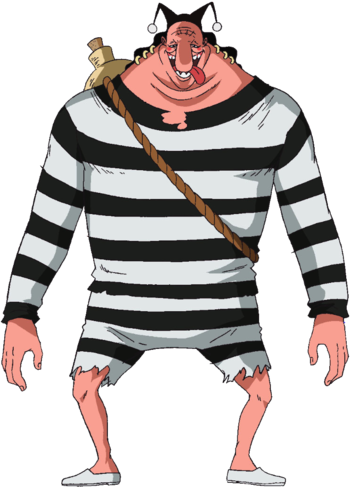 One of the criminals given a life sentence in Level 6 of Impel Down. True to his name, Vasco Shot is often seen drinking from a gourd he always carries and appears to perpetually drunk. He joins Blackbeard's crew after he emerges as one of the four victors in a duel to the death amongst the Level 6 prisoners that Blackbeard frees, and he becomes the Titanic Captain of the crew's eighth ship. 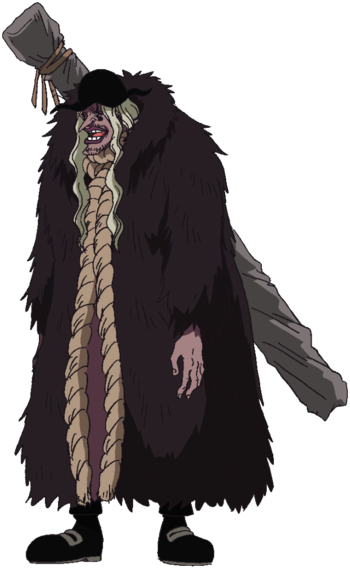 "The thing called fate... it's a measure of how much a person's existence is worth..."

One of the original 5 Blackbeard Pirates and the ship doctor, Doc Q is a Deadly Doctor who is constantly sickly and weak, just like his horse Stronger. Like most of the crew, he is a fatalist, believing that fate is the measure of a person's worth. After the Time Skip, he becomes one of the Ten Titanic Captains and the captain of the Ninth Ship.

Over the Time Skip, he acquires the Sick-Sick Fruit (Shiku Shiku no Mi) with which he can afflict enemies with a wide variety of diseases, conventional or not. 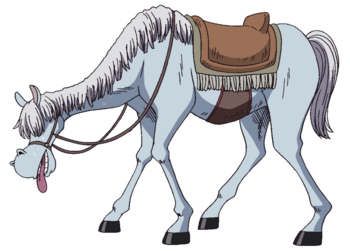 Doc Q's pet horse. Despite his role to support his master, he's just as sick as Doc himself.

Over the Time Skip, he acquires the Horse-Horse Fruit, Model: Pegasus (Uma Uma no Mi: Model Pegasus), allowing him to turn into a Pegasus and fly. 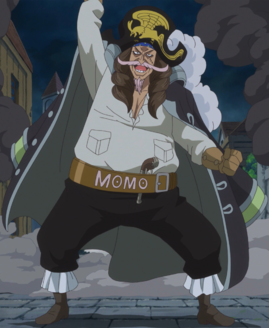 "I work for the operation of Blackbeard, emperor of the sea, and I've taken on the name of Peachbeard!! Remember my name!! Fear Blackbeard!!!"
—Chapter 904

Captain of the Peachbeard Pirates, a crew subordinate to the Blackbeard Pirates. He's seen pillaging a town for Blackbeard until the Revolutionary Commanders stop him.