The main intelligence agency of the World Government, Cipher Pol cells are located throughout the world. They investigate for the World Government and, in contrast to the Marines, handle political threats to the World Government moreso than generic criminals. Cipher Pol acts more as a counter-insurgency agency, and even deals in the Underworld regarding special individuals. There are eight official Cipher Pols numbered from CP1 to CP8 as well as two unofficial units, CP9, whose members have the license to kill, and CP-0, the most powerful one. 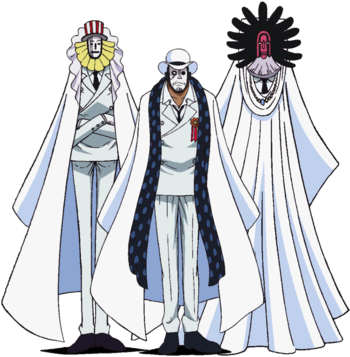 The Strongest Intelligence Agency
"They're the supreme branch of the agency. Nothing good can happen when they're involved."
—Nico Robin, chapter 705 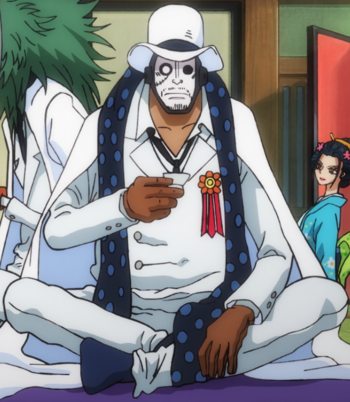 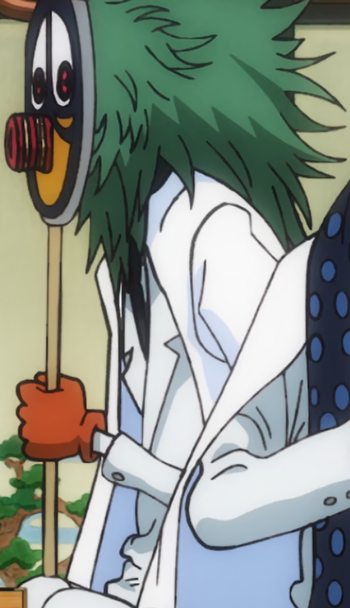 "Queen of the Pleasure District" Stussy

"Queen of the Pleasure District" Stussy

An agent of Cipher Pol 0 who is undercover as one of the Emperors of the Underworld. She attempts to take the Tamatebako at the wedding and fights with Du Feld to obtain it, but fails when it explodes and causes Whole Cake Chateau to collapse. She is able to escape, and is later seen with other Cipher Pol 0 agents at Marie Jois in time for Reverie.

The Ninth Justice, the legendary and secret Cipher Pol Number Nine, is a group of secret agents with superhuman skills and great powers. They are all masters of the Six Powers (Rokushiki); six martial arts techniques that turn an ordinary human superhuman. On top of this, almost all of them are Devil Fruit users. They reside in Enies Lobby and are the main antagonists in the Water 7 & Enies Lobby Arc. The actual president is Spandam. They were charged with the task of finding the Pluton's Blueprints and capture Nico Robin. Their actual members are: Spandam (Power Level: 09), Rob Lucci (Power Level: 4000), Kaku (Power Level: 2200), Jabra (Power Level: 2180), Blueno (Power Level: 820), Kumadori (Power Level: 810), Fukuro (Power Level: 800) and Kalifa (Power Level: 630). The rookie member, Nero, is slain shortly after his appearance by Lucci after he is defeated by Franky.

In the aftermath of the Water 7 & Enies Lobby Arc, the group's failure to stop the Straw Hats lead to them being expelled from Cipher Pol and hunted down. Although some point during or after the Time Skip, Lucci, Kaku, Blueno, and Kalifa have been reinstated and have since joined CP0. 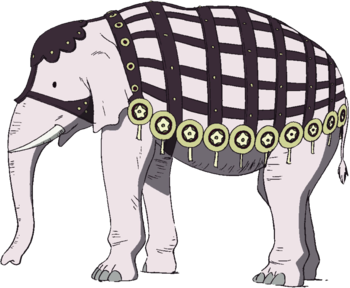 "The most important thing is my life!!! And increasing my status! If I let my men go wherever they want, then if something happened, who would protect me?! "
—-Chapter 391

The chief of CP9 and Enies Lobby and the son of Spandine, Spandam is Rob Lucci's superior officer, though he's actually weaker than even a normal marine. A clumsy, cowardly, power-hungry swine, he works only to further his career. When he was a member of CP5, he convinced the leaders of the World Government to let him seek out the blueprints of Pluton. He possesses a broadsword named Funkfreed that has "eaten" the Eleph-Eleph Fruit (Zou Zou no Mi), allowing it to turn into an elephant. It was later revealed, in small doses in the manga, and just outright in One Piece Film: Gold that he's now on the CP-0 unit, only this time now working under Lucci. 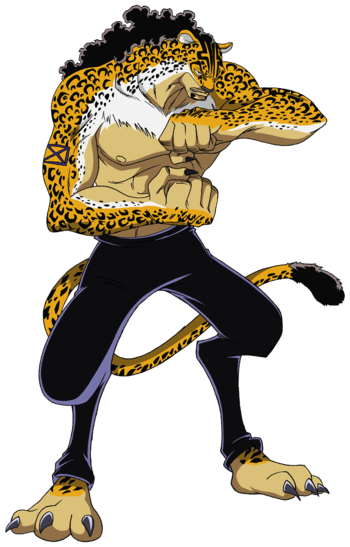 "They were criminals, so I killed them in name of justice...as soldiers, weakness is a sin. They surrendered to evil, and caused a crisis in the kingdom. That type of soldier doesn't deserve to live. So they're dead."

Originally introduced as one of Galley-La Dock One's foreman, Rob Lucci is actually the strongest Cipher Pol Number Nine has ever seen, noted by the Marines for his dedication to the World Government and Justice. He is calm and ruthless, even refraining from the Evil Laugh, a staple among One Piece villains. He and his group are masters of the Six Powers, a martial arts fighting style based on six different superhuman techniques, and he and the rest of CP9 gave the Straw Hats some of their toughest and most grueling battles yet. He has eaten the Cat-Cat Fruit (Neko Neko no Mi), Model: Leopard.

He's expelled from CP9 along with his co-workers after Spandam blames them for the failure of the Enies Lobby mission, and also finds himself being hunted down by the Marines in order to be silenced. With the help of his fellow ex-CP9 members, Lucci survives this ordeal and joins CP-0 during the Time Skip. 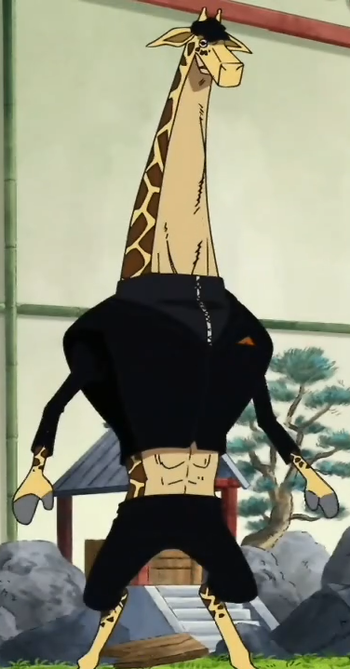 Originally introduced as one of Galley-La Dock One's foreman, Kaku is revealed to be one of the elite members of Cipher Pol #9, second only to Lucci, and also the youngest one. Has a peculiar, "squared body" and a very long nose, similar to Usopp's. He too can use the Six Powers and is a master of Tempest Kick, to the point that he's developed the Four-Swords Style (Yontoryuu) using two katanas and his legs. He also has eaten the Ox-Ox Fruit (Ushi Ushi no Mi), Model: Giraffe and can turn into a Giraffe-man, but despite his ridiculous appearance, he's still as much powerful and dangerous if not more so.

He's first seen as one of Galley-la Company's best shipwrights, and is the one who tells the Straw Hats that the Going Merry is beyond repair, until he's revealed to be an undercover spy for the World Government. Then he goes to Enies Lobby along with the other undercover agents, where he eats the Ox-Ox Fruit, Model: Giraffe and later fights Zoro. After a long and intense fight, the three-swords swordsman wins and Kaku gracefully gives him his key, revealing it's the one that opens Nico Robin's handcuffs.

After the events of Enies Lobby, he's kicked out of CP9 and, with the help of his ex-colleagues, he collects money to heal Lucci and swears revenge on Spandam.

After the time-skip it is revealed that he has become a member of CP-0. 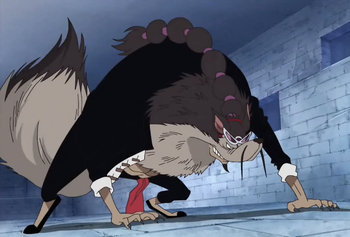 "If you were still connected to that "shepherd" and being protected, you would've been safe...but since a lamb wandered around on his own, it'll be eaten by a fearsome "wolf". Gyahahahah!"

One of the elite members of the Cipher Pol #9 and the third strongest (being slightly weaker than Kaku). He's able to use all 6 of the Six Powers techniques and, in particular, is a master of Iron Body, using the Iron Body Kung Fu fighting style (being able to attack while maintaining his high defenses). He has eaten the Dog-Dog Fruit (Inu Inu no Mi), Model: Wolf and can turn into a wolf-man.

Along with the others, he's also expelled from the CP9 after the events of Enies Lobby.

The only female member of the Cipher Pol #9 and the physically weakest member (not counting Spandam, who's even weaker than an average Marine soldier). She infiltrated the Galley-La company as Iceburg's secretary for five years. After going to Enies Lobby, she eats the Bubble-Bubble Fruit (Awa Awa no Mi) which grants her the power to create and manipulate soap.

Another one of CP9's members who infiltrated Water 7, but didn't join Galley-La Company. Instead, he disguised himself as a bartender until he and his teammates found Pluton's blueprints. During the Enies Lobby arc, he faces Luffy and becomes the guinea pig for Gear Second's first use, thus he's the first member of CP9 defeated.

He's a Six Powers master and has some of the stronger Iron Body techniques among the CP9, but he's not able to move freely like Jabra; instead, he uses a technique called Wheel. He also has eaten the Door-Door Fruit (Doa Doa no Mi), which gives him the ability to open a door anywhere he wants; on walls, inside a person, and even in the air, essentially giving him the ability to create a Pocket Dimension. 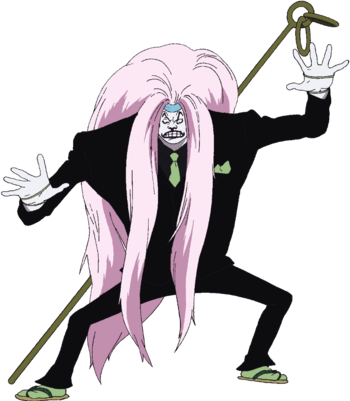 One of the elite members of CP9, who doesn't infiltrate the Galley-La Company, and is introduced only after the events of Water 7. He's the largest among the group along with Fukuro (not counting hybrid-forms), standing at roughly 8 feet tall, and arguably the most eccentric with a very large presence. Has long pink hair and white make-up on his face, plus black lines around his eyes and mouth. He's a master of the Six Powers, but doesn't excel in any specific type, nor has he eaten a Devil Fruit, so he resorts to fighting using a staff (Khakkhara) in combination with the Six Powers.

He can also use Life Return (Seimen Kikan), which gives him full dominion over his body (he mainly uses it to make his hair prehensile). 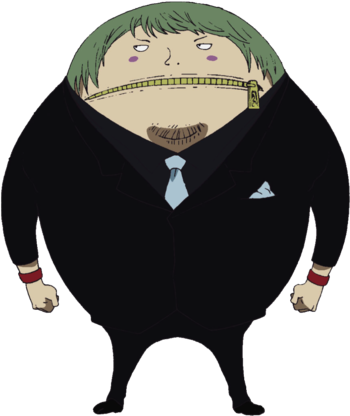 One of the last-seen members of CP9 introduced, since he doesn't participate in Water 7's infiltration. He's a big, round man (literally) with a zipper for a mouth. Ironically, he has a bad habit of saying too much, and this often causes trouble to his fellow members, especially during stealth missions. He doesn't have any Devil Fruit power but is a master of the Six Powers, like any CP9 member, and is a master in the Shave technique, using stealth attacks. He's also been a black belt since he was a kid.

At Enies Lobby, he tells the Straw Hats that every member has a copy of the key for Nico Robin's handcuffs and faces Franky, who defeats him after a long match. Later he's kicked out of CP9 along with his fellow members.

The newest recruit of CP9, a pale and slim man with many jewels on his body. Unlike the other members, he can't use Finger Pistol or Iron Body, and relies on his guns. He helps escort Nico Robin on the Puffing Tom, where he fights and is defeated by Franky. For his loss, Rob Lucci pierces him and throws him off the train. He has not been seen since then.

The director of CP9 at the time of Ohara's destruction 20 years before the start of the story, and Spandam's father. 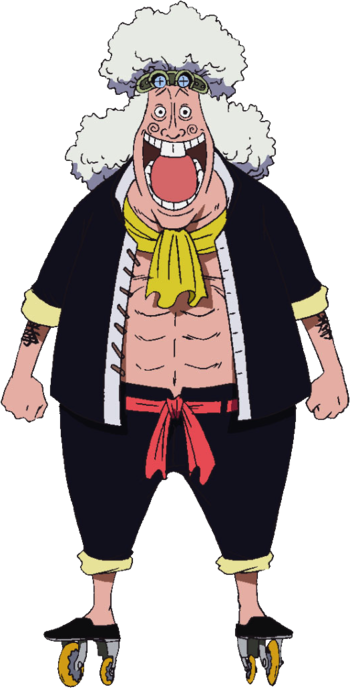 A member of CP7 and a cook who makes ramen noodles. He's one of the Cipher Pol agents who try to stop the Straw Hats on the Sea Train. 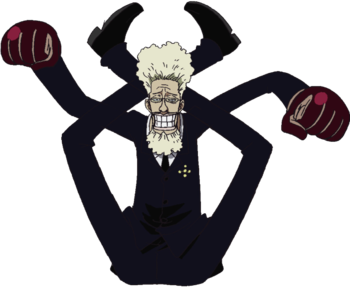 "No matter how rowdy this intruder is, there's no need to fear him because in this car... I can protect you!!!"
—Chapter 362

A member of CP6 found in the Puffing Tom when Sanji invaded. He is a boxing champion from Karate Island in South Blue.