Also known as the Warmongers, they are a paramilitary army of the Kingdom of Germa, led by the Vinsmoke family, with the patriarch and the land's king, Vinsmoke Judge, at its head. They're usually known as a mythical evil army, in no small part due to the propaganda comic strip Sora, Warrior of the Sea demonizing them, but they are very real, and possess advanced enough technology for Big Mom to want to recruit them.

The Germa 66 are shown as greatly relying on technology — a large number of clones are produced in a secret laboratory, where they're modified to have unconditional loyalty to the Vinsmokes so they could be used as Cannon Fodder. The Vinsmokes themselves always wear their sophisticated raid suits in battle, which are completely fireproof and allow them to fly. The Vinsmoke children in particular boast enhanced physical abilities and wield special powers, thanks to Judge experimenting on them. 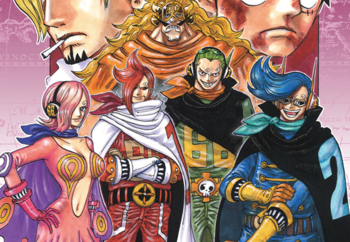 A powerful Underworld family of royal assassins. The Vinsmokes rule the Germa kingdom with an iron fist, and command the kingdom's military faction, Germa 66. When not doing either, they can be hired for various jobs for a substantial fee.

Its members include: Vinsmoke Judge, the patriarch; Vinsmoke Reiju, his eldest daughter and child; and Judge's fraternal quadruplet sons, Vinsmokes Ichiji, Niji, and Yonji, in that order. Sanji, a member of the Straw Hat Pirates and third-born of the Vinsmoke quadruplets, is currently estranged from his family. The matriarch and mother, Vinsmoke Sora, is deceased.

"You have my most sincere thanks for taking care of my little brother for all this time."

"Poison Pink" Reiju is the only daughter and oldest child of the Vinsmoke family, as well as Sanji's older sister. A genetically modified Super Soldier, Reiju possesses enhanced strength, speed, and endurance that are far beyond a normal human's.

She has the ability to generate and control deadly poisons, as well as consume them herself, and suffer no ill side-effects from it afterwards. Additionally, she has eaten an as of yet unrevealed Devil Fruit (according to Oda in an SBS issue), although whether or not her poison-nullifying abilities are related to it are unknown at present. Although she supports her family's warmongering on the surface, her heart and personal, private actions suggest otherwise, especially when it comes to Sanji. 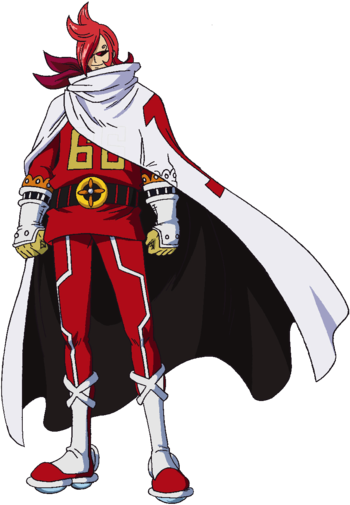 "Sanji, I've never understood how that brain of yours worked ever since we were kids. Understand this; Royals... are meant to act like royals!"

"Sparking Red" Ichiji is the first-born of the Vinsmoke quadruplets and thus one of Sanji's "big brothers". A genetically modified Super Soldier, Ichiji possesses enhanced strength, speed, and endurance that are far beyond a normal human's.

He has the ability to produce fire that usually manifests in explosive sparks of light and piercing beams. Unlike his hot-tempered brothers Niji or Sanji, Ichiji almost never emotes and is the snarkiest of his family, being quick to deliver scathing comments (especially to Sanji). 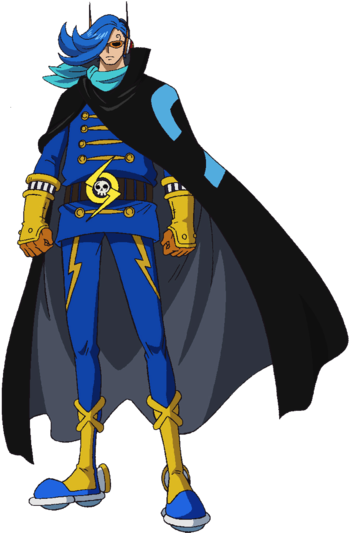 "You've gotten way too comfortable rubbing elbows with the low-life commoners! If you insist on calling yourself my brother, I won't stand for such demeaning and despicable acts!"

"Electric Blue" Niji is Sanji's second-eldest brother and the second son of the Vinsmoke family. A genetically modified Super Soldier, Niji possesses enhanced strength, speed, and endurance that are far beyond a normal human's.

He has the ability to produce electricity without a Devil Fruit, and become invisible (which he calls "Stealth"). Out of his quadruplet brothers, Niji is extremely violent, petty, and hot-tempered, and due to his upbringing, he's a massive Jerkass and Royal Brat par none. 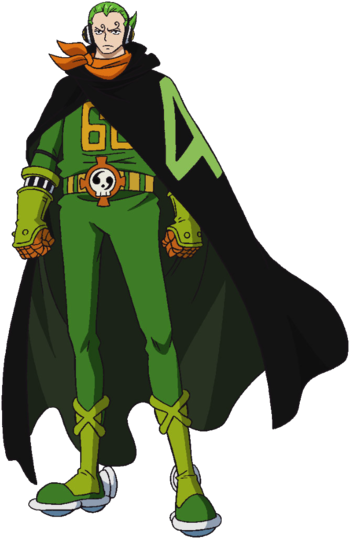 "Sucks to be you guys... I'm not the type of man that goes around saving people. How about you try stealing the antidote from me? Like real pirates would..."

"Winch Green" Yonji is the youngest of the male quadruplets and fifth child overall of the Vinsmoke family, thus being Sanji's "little" brother by technicality. A genetically modified Super Soldier, Yonji possesses enhanced strength, speed, and endurance that are far beyond a normal human's.

Unlike all of his older siblings, Yonji lacks any elemental powers of his own; instead he has an artificial right arm that gives him immense strength, and could be extended to grab objects and people with a tight grip.

Stealth Black is a fictional member of Germa 66 portrayed in the comic strip "Sora, Warrior of the Sea". His similarity to Sanji's raid suit causes him all sort of trouble.
Vinsmoke Sora 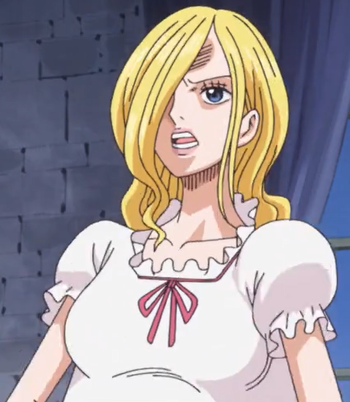 Vinsmoke Judge's wife and the mother of their five children, Reiju, Ichiji, Niji, Sanji and Yonji. After the birth of their daughter, Judge got the idea to start genetically tampering with their next batch of offspring. She was firmly against her husband's plans to turn her unborn quadruplet sons into superhuman, emotionless war machines, but was still forced to undergo surgery against her will. To counter the modifications of her children, she took a drug whose aftereffects eventually led to her death. The only child that was affected by said drug was Sanji, who did not develop superhuman abilities and retained his empathy.