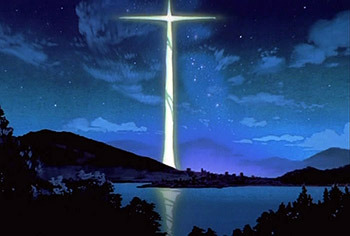 What do you mean, "it's not symbolic"?
"And a cross from a faith that died before Jesus came..."
— Sarah MacLachlan
Advertisement:

Most Japanese are not Christian. They hear Westerners talk about it, and most of it gets lost except for the imagery of some poor guy getting ritually killed and then reanimated, and a vague understanding of a specific kind of afterlife and hell. Ironically, this makes the more unfamiliar aspects seem somewhat morbid to those unfamiliar with the context — in fact, similar to how many Westerners view Vodou/Vodun/Voodoo. Additionally, many places are familiar with crosses as historically common execution devices but lack the religious baggage making their depiction explicitly taboo.

At the very least, in Japanese imagery, Christian imagery tends to be visual short-hand for occult overtones if it's intentionally symbolic. Occasionally it's used as simply a fashion choice, much in the way kanji inserted just for the hell of it are used in other countries. And sometimes, you'll have people use giant crosses as physical weapons just as much as religious ones.

This isn't at all exclusive to countries unfamiliar with Christianity either, as the familiar symbols and motifs can easily be used for religious, vaguely occult, or otherwise eerie associations in media.

See also Crucial Cross (where the cross is used to represent hope in the face of suffering), Crucified Hero Shot (where a suffering hero t-poses) and Faux Symbolism.