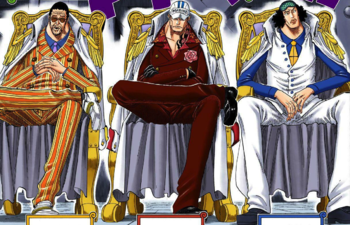 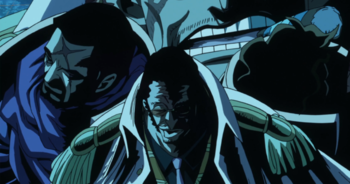 "The World Government calls these three the 'Greatest Military Powers'...and he is one of them!"
—Nico Robin describing Aokiji, Chapter 319

The Marine Admirals (the ranks of Commander-in-Chief and Fleet Admiral being bundled with the former) are the second-highest ranking members of the Marines, and are the strongest fighters they can offer, aside from the Fleet Admiral himself (who's usually confined to desk work most of the time anyway). The Marine Admirals are the very definition of Authority Equals Asskicking, being feared by pirates and criminals everywhere, and are among the strongest individuals in the entire One Piece universe. On top of their fearsome combat abilities, they also have the authority to command whole fleets with the many Marines ranked under them, have a say on the overall strategy of the organization, and can issue special orders, such as enacting the Buster Call at any time while also granting anyone else such an ability. There are only 3 Admirals at any given time, all acting under a single Fleet Admiral.

Most Admirals tend to use an alias, consisting of a color plus an animal. The color aspect is often relevant to the ability they possess and their choice of attire. The animal aspect is usually incorporated into their named attacks in one way or another. 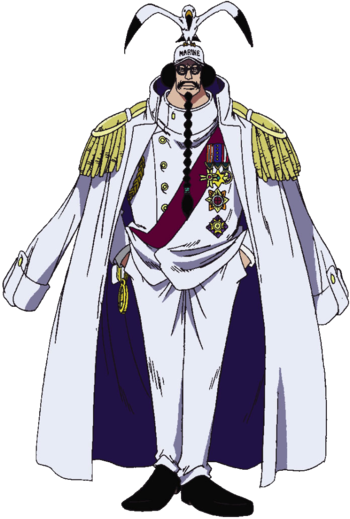 "The fortress... can always be rebuilt. But the island of Marineford is the hub of our world! For all the citizens of the world who fear an invasion of evildoers... this is an ominous day! But justice and righteousness will never be defeated! Don't you dare speak lightly of sinking this island, you fiend!!"

Fleet Admiral Sengoku, also known as "Sengoku the Buddha", was the supreme commander of the World Government's military force, the Marines. One of the few who still knows the seas from the olden days, he's even respected by figures like Whitebeard. He is stern and business-like, which often puts him at odds with his old friend Garp, whom he occasionally bickers with. He has eaten the Human-Human Fruit (Hito Hito no Mi), Model: Buddha, a Mythical Zoan-class Fruit which allows him to turn his body into a giant, golden, Buddha-like entity. He is one of the few people in the world that can use all three forms of Haki, and is the only Marine among them.

After the battle at Marineford, he resigned from his position because of his doubts about the World Government's actions, and thus personally nominated Admiral Aokiji to be his successor. Two years later, he's a General Inspector

◊ for the Marines, so he hasn't totally retired from business yet. 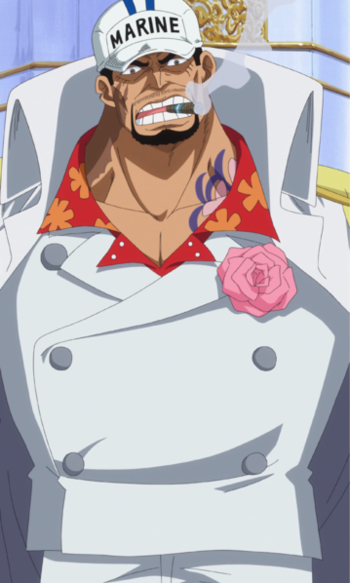 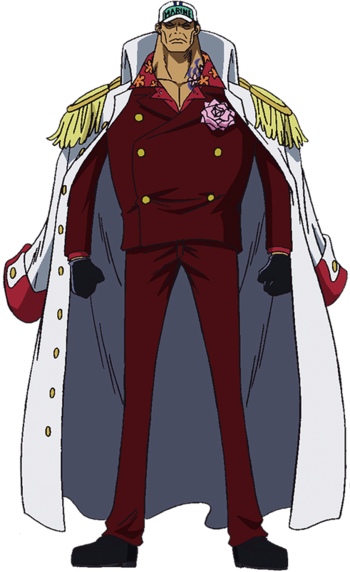 "If you're gonna do it, finish the job!! If, by chance, even a single scholar is hiding out in that ship, all this sacrifice will be for naught. You must destroy "evil" at its very roots!"
—Chapter 397

Real name Sakazuki, Akainu was one of the three Admirals (before being promoted to Fleet Admiral), the strongest fighters in the Marines. Akainu is apparently the most hard-line of the Marines, following the doctrine of Absolute Justice. During the destruction of Ohara, he destroyed an evacuee ship full of civilians on the small chance that one of their targets was aboard, saying that if one is to do a job it must be done thoroughly. During the Paramount War, he's the Marine most invested in destroying both Luffy and Ace because of their heritage. He has eaten the Magma-Magma Fruit (Magu Magu no Mi), a Logia Devil Fruit allowing him to possess the power of magma.

During the two years that Luffy was training, he battles Aokiji for the rank of Fleet Admiral and wins. He then moves the Marine HQ to the other side of the Red Line to put more Marine presence in the New World.

"Speed is 'weight'. Have you ever been kicked at the speed of light?"
—Chapter 508

Real name Borsalino, Kizaru is the only pre-timeskip Admiral to have retained his position after the timeskip, after Akainu was promoted and Aokiji left. He has somewhat of an absentminded and out-there personality, committing such acts as mistaking his snail wiretap for his phone, and politely asking the pirates who just shot at him if they could help him find his acquaintance. Befitting this, his Justice is "Unclear Justice", a purposely unspecified type of justice that allows him to simply do what is ordered of him. He has eaten the Glint-Glint Fruit (Pika-Pika no Mi), which allows him to manipulate, create, and turn into the element of light. Several of his abilities include being able to fire laser beams and traveling at the speed of light. 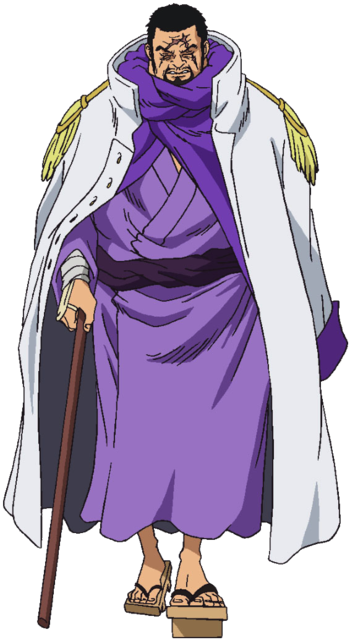 "Not having sight is a blessing. The world of men...is full of filthy things not worth layin' eyes upon."
—Chapter 701

Real name Isshô, Fujitora is one of the new Admirals who replaced Aokiji and Akainu after the timeskip, and is the first new Admiral to be introduced after the timeskip. He follows Blind Justice. He has eaten the Press-Press Fruit (Zushi Zushi no Mi), which is a Devil Fruit that allows him to manipulate gravitational forces at will, granting him truly destructive combat abilities.

Fujitora was enlisted into the Marines through a World Government draft alongside fellow newcomer Ryokugyu, and was promoted to the rank of Admiral within two years. He has shown to be kinder than most Marines, and follows his own sense of morality and justice when carrying out his duties, which oftentimes causes conflict with his superiors.

"So... you know how things work outside of here? The Celestial Dragons are are the gods of the world!! And here in this country unaffiliated with the World Government... you have no human rights!!"
—Chapter 1054

Real name Aramaki, Ryokugyu is the other new Admiral introduced after the Time Skip. Ryokugyu is an enigmatic character who makes his debut in the Reverie Arc at Mariejois as a security detail and Isshô's keeper. He's an easygoing man who's on an extreme fast that has persisted for three years, and has a close connection with "old man Vegapunk". He remains enigmatic until finally dropping by at the end of the Wano Arc. Upon his full introduction, Ryokugyu reveals himself as a huge supporter of Akainu's brand of thorough justice and wants to bring down Luffy to get his superior's approval.

Ryokugyu ate the Woods-Woods Fruit (Mori Mori no Mi), a Logia-class Devil Fruit that gives him the power to create and command various plant life in both harmless and violent ways, depending on what goal lies in front of him. Being a Logia, he can also transform his body into various plants/wood. He is able to sprout vines and branches from his body like tentacles, which is also how gets his nutrients without eating, simply by using his vines to sap them from various sources... and sometimes from other people. His flippant personality is hard to read, because he can abruptly switch from lawful and reasonable to destructive and disobedient, which has earned him a few tongue-lashings. This makes sense when Aramaki shows his true personality: a man with no mercy to anyone who doesn't side with the World Government, even if they live in seclusion, or there is disparity imposed on them. The man takes it all in stride as if the inequality builds character and loyalty.

"But justice changes shape depending on one's standpoint. That is why I won't criticize your idea of justice."
—Chapter 397

Real name Kuzan, Aokiji was one of the three Admirals before the timeskip (before he resigned), the strongest fighters in the Marines. Aokiji follows a form of justice that he calls "Lazy Justice", resulting in a very relaxed, almost self-assured attitude. When he first met the Straw Hats, he showed no intention to fight, calmly discussing things like their bounty increase and even making a pass at Nami, leading the group to initially wonder if he really was an Admiral or not. He has eaten the Chilly-Chilly Fruit (Hie Hie no Mi), a Logia Fruit that allows him to turn his body into ice, as well as produce limitless amounts of ice and manipulate it. Overall he's a pretty chill guy.

During the two years Time Skip, he battled Akainu for the position of Fleet Admiral and lost, leading to him leaving the Marines.