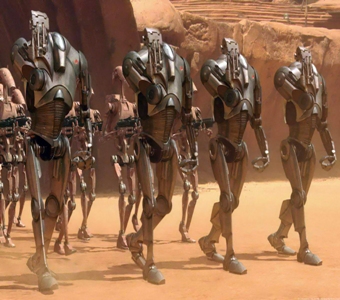 Not squishy anywhere.
"If you are looking for an unstoppable army of killing machines unhampered by such weaknesses as mercy and compassion, robot warriors are for you."
— Neil Zawacki, How to Be a Villain

In many American cartoon series, the extraordinary violence is blunted by having the nameless bad guys (or Mooks) be, in fact, robots. This allows the protagonists to dismember, mutilate, and otherwise mess-up armies of faceless goons, in a manner unacceptable if said bad guys were squishy and red on the inside.

In many of these shows, a common sequence has the heroes fighting the humanoid-looking mooks as normal, until one of them hits one a little too hard, revealing it to be a robot. At which point, things start to get really, really messy, as the heroes decide they don't have to hold back anymore.

Mecha-Mooks are surprisingly fragile. In extreme cases the heroes will demolish them with their fists. Mecha-Mooks go to the Imperial Stormtrooper Marksmanship Academy, since it would be awkward if the heroes had their brainstems targeted perfectly by Mooks running a predictive kinetic model much faster than real time. Expect them to be programmed to march in eerie unison using Marionette Motion (and in a pinch provide back-up for dance numbers).

Two governing rules of Mecha-Mooks seem to be:

1) Upon being defeated, they will explode. Usually into a fireball, leaving nothing behind but a few patches of burning earth. This will usually happen no matter how they were defeated, even if it was something like turning off their power source.

2) Said explosions never produce shrapnel. A hero can be five feet from a Mecha Mook, blow him up, and somehow not be cut to pieces by the flying shards of metal. Samurai Jack is particularly guilty of this, with mooks constantly exploding in Jack's face.

This often is a form of Pragmatic Adaptation when the series is based on an earlier source which was more realistically violent, but showing that would invoke the ire of Media Watchdogs. When you've got an action-based children's show where Nobody Can Die, expect Mecha-Mooks to pick up the slack. After all, they're Just Machines. Should they not explode, then at the least you will see Eye Lights Out. On a related note, if they should be hacked or reprogrammed their Glowing Eyes of Doom will have a Convenient Color Change. Additionally, it can be cheaper to stage than using human extras.

Anime, has a second, more literal type: Real Robot series will usually have at least one class of mecha that basically acts as the "Grunt" unit for the bad guy's army. This mech is usually simply constructed, probably with a basic ranged weapon (machinegun or Energy Weapon or two, a close-combat weapon, and may have the option of carrying a bigger gun, depending on how much tougher the hero's armor is.) These will act just like regular Mooks or Mecha-Mooks, depending on how much the writers want you to empathize with the enemy. There's usually a very good chance that the Hero's Rival will at least start out by riding in an Ace Custom version of this mecha. Tanks usually serve a similar role on the heroes' side, and said grunt will often be the only thing they can reasonably threaten.

For obvious reasons, Mecha-Mooks are usually very far down the Sliding Scale of Robot Intelligence. If they do show signs of self-awareness, destroying them becomes much more ethically problematic.

If one wants something a bit more up the ladder in terms of "kill-tasticness" and "non-suckitude", look at Mechanical Monster. If you want the guy building the mooks, that's the Robot Master. Contrast with Plant Mooks, the vegetative alternative.

A subtrope of Robot Soldier and, obviously, Mooks.