This is part two of the Player Characters in Elsword. The classes which are featured in the in-game storyline of each character are highlighted in bold. 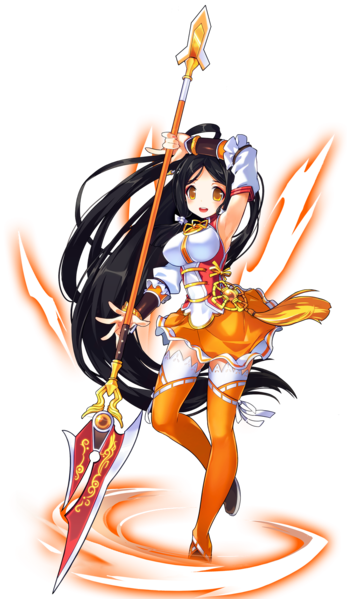 The Little Xia
Click here to see her advanced classes

"Until I face my brother again... I cannot give up!"

Ara Haan was born in Fahrmann, the dominion of the Gods which is located at the North of the Fluone continent. She is a descendant of the Haan Family that protected the seal of the Gumiho-god for generations. One day, the village disappeared as a whole because of the demon invasion. The demon that led the invasion of the village was none other than Ara's brother, Aren Haan (Ran) who was corrupted by the power of the Dark El. She managed to fend off the invasion with the help of the gumiho, via the mystical hairpin in which it is sealed. The gumiho spirit, Eun, offered Ara help for searching and restoring her brother in exchange for recovering the lost El power. Then she traveled to Hamel (where Ran resides) and can only find traces of demons. After a little misunderstanding, Elsword and co, who have been hunting the demons there, offers Ara help to locate the escaped Ran.

Ara is a skilled martial artist who uses a spear. Her versatile air movements rivals that of Eve, while her spear gives her wide attack range; she can be surprisingly quick with the spear, too. Ara also has a unique trait to her different from others, as she uses "spirit orbs" which can be used in conjunction of MP. 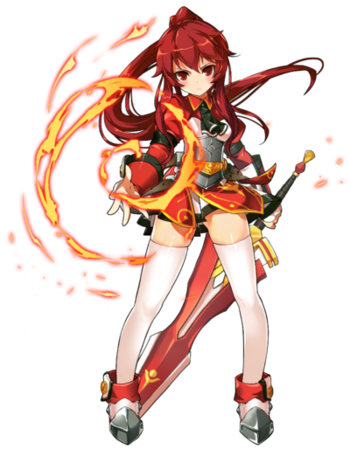 The Free Knight
Click here to see her advanced classes

Elesis is strong willed but is prone to acting before talking. She would do anything as long as it's for her younger brother, Elsword, and cares deeply for him. Elesis's sword skills were passed down to her from her father who is a famous but retired Velder Kingdom Knight. She mastered her father's teachings very quickly and improved upon it to make it her own. However, Elesis wasn't satisfied with her training in Ruben, so she ventures out into the wide world of Elrios to become a stronger swordsman. She returns to Ruben 3 years later, earning the title of "Red Haired Knight" and comes to watch Elsword's progress. After returning, Elesis and her brother were ambushed by a horde of demons led by Scar, the Captain of the Demon Realm. After much struggle, she was able to fight them off, and defeated Scar with the help of Elsword. Knowing that the Demons will return, Elesis leaves Ruben to become a Velder Kingdom Knight in order to defend her brother and all of Elrios from the approaching demon invasion.

Elesis is as fierce as she is calculated, expressing sedate attacks with her claymore on to her enemies. Although she wields a mighty claymore, Elesis herself is agile, able to evade and gap close with extreme effect unlike her brother Elsword, who incorporates a more defensive fighting-style. In addition to her swordsmanship, Elesis is also capable of harnessing and expressing energy into fire, enhancing her combat effectiveness. 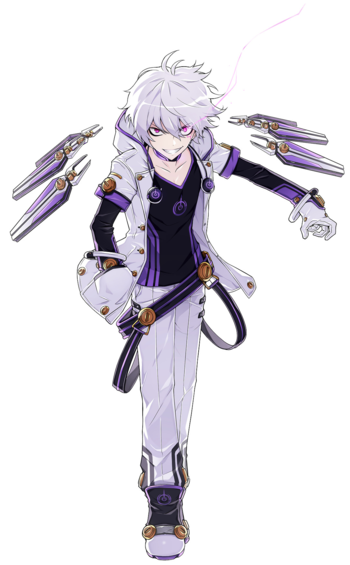 The Tracer
Click here to see his advanced classes

Add came from a family of Nasod researchers who were purged amidst the Human-Nasod wars and he got thrown to a life of slavery after the wars. While trying to escape, Add got trapped in the Ancient Library, but with enough food and books there, he spent his time expanding his knowledge and constructing himself a special weapon, called Nasod Dynamo, from broken Nasod parts inside the library. After several years, he came out mentally unhinged from the isolation, along with an obsession to find rare Nasod codes. As the library distorted time inside, he ends up in the future outside, where the Nasods no longer exist. He manipulates Wally in order to grow his strength and originally sought to find a way to get back to the past. That was until Add found traces of "that person" from the corrupted Nasod King.

Staying true to his concept of being a mechanic, Add uses his mechanized weapon Nasod Dynamo and electricity in battle. He can create electric pillars or use his mobile weapon 'Nasod Dynamo' for melee attack. His attack style will be transitioning in-between long range and close range attacks.

His job paths so far are as follows: 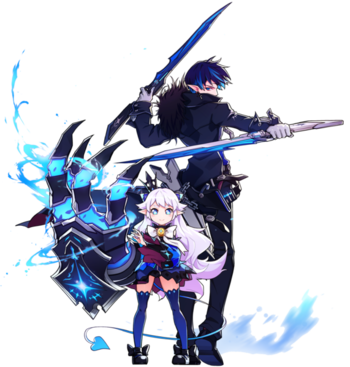 The Demon Power
Click here to see their advanced classes

Lu (full name Luciela R. Sourcream) was a lord of the Demon Realm whose betrayal by her subordinates led to her sealing. She managed to break free at the last minute and fled to Elrios, but not before the immense mana consumption to make the dimension leap reduced her body to a childlike size. She was then found and nursed back to health by Ciel. Some time after, when demon hitmen came after her, Ciel tried his best to protect her until he got mortally wounded. Unwilling to do it alone, Lu revives him as a half-demon by making a contract, to which a grateful Ciel responds by accompanying her on her quest for revenge and vindication.

Lu and Ciel fight as a single unit, and can be freely interchanged: Lu specializes in demonic magic, Ciel hacks away at his enemies with his pair of gunblades, and both can be simultaneously used to create combos. Both has separate MP bars, and switching between the two (whether during combos or with skills) will fill their special Combination Gauge that they can use for special Combination Skills.

Their job paths are as follows:

Tropes associated with both characters: 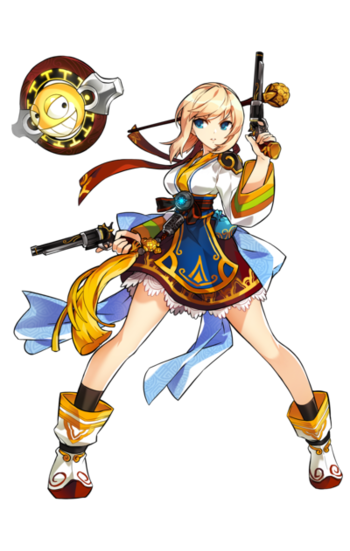 The Gunner
Click here to see her advanced classes 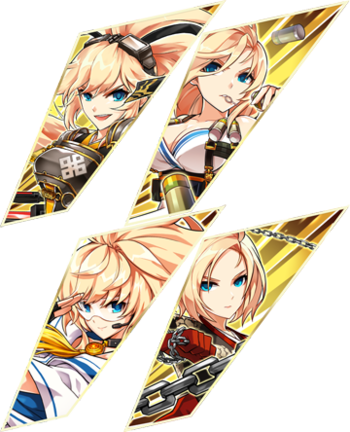 "I will obey the imperial princess's command!"

A borrowed character from Dungeon Fighter Online. A member of Majestic Garden that protects the Royal City in Empyrean, Anna Testarossa was given the code name "Rose", which is only bestowed to those who are the most powerful of the Majestic Garden. In order the enemies who threaten Empyrean, Rose was given the task to investigate another dimension, Elrios.

She fights with 4 kinds of guns, each wielded in pairs: revolvers, muskets, auto-guns and arm cannons, each with differing properties. Her ECP System gives her a special ECP Gauge, which she consumes whenever she switches her gun in the middle of combos or using Active skills; if it's depleted, the gauge will recover and she'll enter the Over Strike state, which empowers her gunshots and Special Active skills for the duration.

Her job paths are as follows: 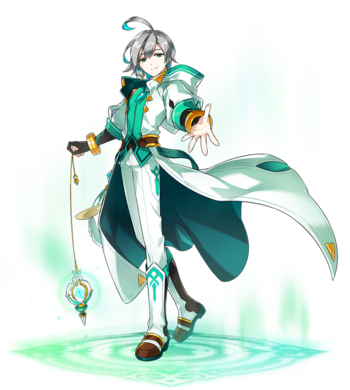 The God's Agent
Click here to see his advanced classes

"My will is god's desire, and my existence is god's will."

A mysterious man who appeared before the El Search Party while looking for the El Shard.

Ain introduced himself as a priest serving the Goddess and offered to help them find the stolen Ruben El Shard but many things about him still remain under a veil of mystery. He practices magic at a higher level than that in Elrios, using a pendulum as a medium, and plays entirely different battles by summoning and projecting weapons from the God's Realm.

His job paths so far are as follows: 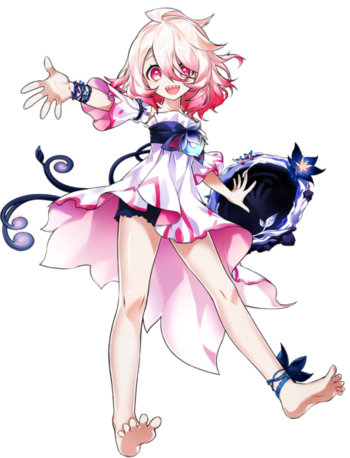 "I come from the Black Forest!"

Laby and her friend and weapon, Nisha. A cheerful yet mysterious girl who lived alone in darkness of the Black Forest near Feita until the El was restored and the voice that demanded she remain no longer did so. She emerged from the forest's center to see the outside world and meets the El Master of Earth, Gaia. She befriends him and accompanies him in his travels, seeing the world outside the Black Forest and hopefully finding out more about who and ''what'' she is.