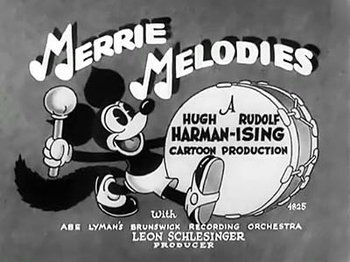 This is Foxy. Who's this Mickey you're talking about?
Scary Terry: [scrapes glove blades against a metal pipe] Welcome to your nightmare, bitch! [attacks]
Rick: Oh, here we go!
Morty: Holy crap! [both run]
Rick: Looks like some sort of a legally safe knock off of an '80s horror character with miniature swords for fingers instead of knives!
— Rick and Morty
Advertisement:

The character equivalent of a Bland-Name Product.

This character's design is a mix of legal issues and homage. Just as someone who wants to incorporate a Walmart into a story but can't manage the Product Placement might use "Box Mart," a person who wants to write Captain Original, but can't because a rival comic company owns the trademark, will create Captain Ersatz. Sometimes, these characters are used as affectionate Shout Outs to a series or creator that may have inspired them. At other times, they are used as parodies or Take Thats against the original characters they're based on (and possibly the company who owns them).

Done when an artist or writer wants to use a character but for whatever reason isn't allowed to at the present time, especially due to uncertainty of ownership, or else certainty that that character is trademarked into someone else's continuity and isn't going to be loaned out.

The key difference between this and Expy is that a Captain Ersatz is obviously the same character but with the Serial Numbers Filed Off, while an Expy uses the other character as a starting point before going in their own direction. Also note that a fictional counterpart to a real-life person would be either No Celebrities Were Harmed, No Historical Figures Were Harmed, or a Shout-Out, depending on the intent. A quick glance around TV Tropes will reveal just how often these mistakes are made on this very wiki.

A Captain Ersatz character, if they make later appearances, tends to evolve into their own direction; it could become an Expy as a result.

Captain Ersatzes are somewhat rare in American parody, as their copyright law allows use of the original characters in parody, which means if they are used in this way, it's usually for a You Wanna Get Sued? gag. They also (usually) aren't found in Fan Fic: that Sailor Earth is a Copy Cat Sue (and they can just outright use a crossover). Sometimes multiple characters will be distilled into one, creating a Composite Character. The same doesn't hold true for Anime & Manga parodies though, which often resort to Captain Ersatzes when the parody character is more than a background cameo.

Ersatz goods were primarily used during times of war when soldiers or civilians couldn’t acquire the real deal, often making up replacements to try and fulfill the need with varying degrees of success..

For common types of Captain Ersatzes, see Fountain of Expies. A cast made up of Captain Ersatzes counts for Cast of Expies. Compare Alternate Company Equivalent, Lawyer-Friendly Cameo, Brand X, Mockbuster. Contrast Writing Around Trademarks, where the similarity was unplanned and unwanted, and Suspiciously Similar Substitute, who replaces an existing original in the same continuity. See also Self-Plagiarism, when a creator or company does this with an earlier creation of their own, and the musical version, Suspiciously Similar Song.

No relation to Captain Obvious, obviously.