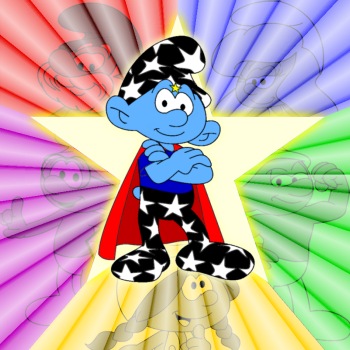 Empath: The Luckiest Smurf is a fanfiction series created by Vic George that is based on The Smurfs. It features his main character Empath Smurf, who is born with telepathic and telekinetic abilities. It is set in its own universe mostly based around the 1980s cartoon show, but also featuring characters from The Smurfs comic books, Sony Pictures' live-action The Smurfs film series, Smurfs: The Lost Village, Johan and Peewit, and the PVC toy character line.

and also on the Smurfs Fanon Wiki

. There's also Reporter's Inside Stories, which is a series of interviews with Smurf characters from the main series, and A Narrator's Story, which consists of non-canonical adaptations of existing Smurfs comic book stories.