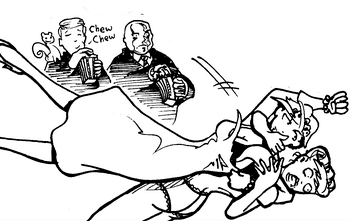 Edd: I hope he doesn't wake Jimmy... this is not good...
Eddy: This is rich, Double D! [seats show up outta nowhere, Edd and Eddy sitting down] Have a seat, front-row center to the greatest show on Earth! [takes out popcorn, gobbling it up]
[Beat]
Edd: Are you gonna share those?
— Ed, Edd n Eddy, "A Glass of Warm Ed"
Advertisement:

When a character is treating a certain scene as pure entertainment, they will often be shown eating popcorn or other stereotypical movie-theater food. Where they get it is a mystery. Usually, the scene will be something like a fight or a private conversation between lovers, that generally isn't intended for anyone's amusement (at least not in-universe). Almost inevitably, the character will be too fixated on the entertainment to actually look at what they’re eating.

This is always used for humor; it often indicates that the character in question, rather than offering to help, is callous enough that they are deriving amusement from someone's anguish or anger. It may also indicate that the character in question has no stake in the outcome. Alternatively, perhaps they do have a stake in the outcome and are confident that somebody they don't like is about to receive a well-deserved comeuppance, or that their side is winning in the case of a fight, or that their Evil Plan is about to come to fruition if it's a villain doing it. Sometimes the character becomes an Audience Surrogate, giving an in-universe voice to the audience's feelings towards the scene.

This is ubiquitous enough that "*eats popcorn*"

◊ and similar remarks are a common response to Internet flame wars.

Compare and contrast Long Speech Tea Time (where the audience has a tea or something because they're bored) and The Snack Is More Interesting (where someone is involved, but acts strangely unconcerned). Come to Gawk and Bile Fascination are often contributing elements. For more catastrophic occurrences, there is While Rome Burns. If the situation is in really bad taste, the spectator is probably a Nightmare Fetishist. A variation on the trope is "Pass the Joint", in which a situation is so strange that the only way to cope is Sure, Let's Go with That and pass around a joint to mellow out.

Oscar, Grundgetta, and a random grouch anticipate Telly's tuba mishaps, all while sharing popcorn and tossing it.

Oscar, Grundgetta, and a random grouch anticipate Telly's tuba mishaps, all while sharing popcorn and tossing it.