The Champion of Cyrodiil 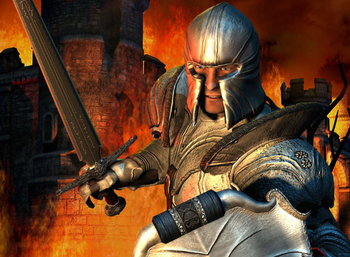 A prisoner in the Imperial Prison that was lucky enough to cross paths with Emperor Uriel Septim and the Blades. After escaping and witnessing the Emperor's assassination, they are tasked with delivering the Amulet of Kings to Jauffre. 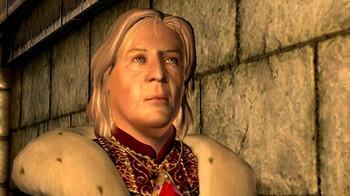 The Emperor of Tamriel. The player meets him at the beginning of the game, as he is escaping from a group of assassins through a secret passage in the Imperial Dungeons. His attempts to flee are futile, and he is eventually killed, but not before handing the player the Amulet of Kings, which starts the main storyline of the game.

For additional details on Uriel Septim VII outside the context of Oblivion, see his entry on the series' Recurring Characters page. 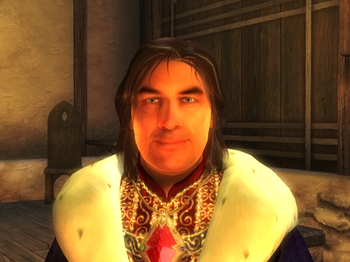 The last surviving son of Emperor Uriel Septim, Martin was raised as a priest in the city of Kvatch. After the Emperor's death, daedra invade Kvatch in order to hunt Martin down, but he is rescued by the player. Despite being reluctant at first, he grows to suit the role of Emperor.

The Blades in General 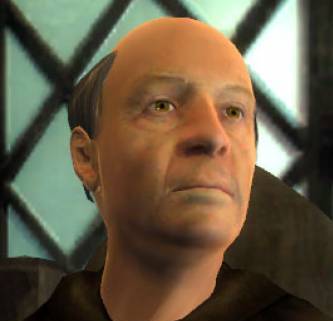 The aging Breton leader of the Blades, who comes out of retirement during the Oblivion crisis and serves as a mentor to Martin. 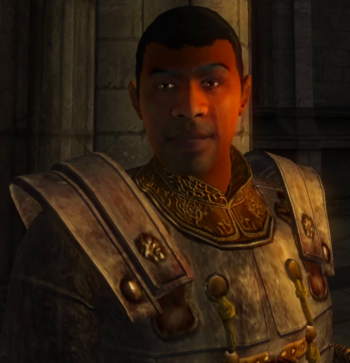 A young Redguard Blade who served as Emperor Uriel's bodyguard during the last moments of his life.

Order of the Mythic Dawn 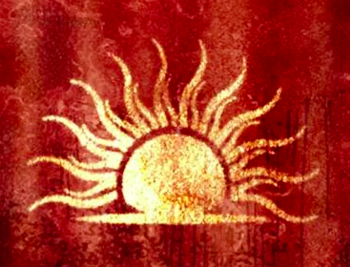 A cult dedicated to destroying boundaries between Tamriel and Oblivion. Led by the elusive Mankar Camoran. 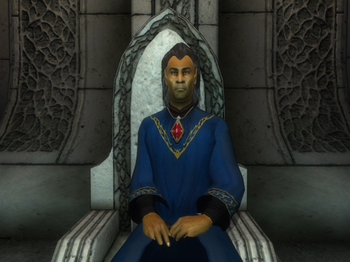 An Altmer mage, leader of the Mythic Dawn cult, and bent on summoning Mehrunes Dagon to Tamriel. Writer of the "Commentaries on the Mysterium Xarxes".

An Altmer member of the Mythic Dawn responsible for opening the Oblivion Gate at Kvatch, where he was killed. He later assists the Hero of Kvatch in Paradise.

Daedric Prince of Destruction and the leader of the Daedric forces invading Tamriel. Worshipped by the Mythic Dawn as a god. Appears in the flesh at the end of the Main Quest in a last ditch attempt to stop the lighting of the dragonfires, forcing Martin to perform a Heroic Sacrifice to defeat him.

A Dremora that you encounter in Mankar Camoran's Paradise. He assists you in the quest by providing you with the Bands of the Chosen, should you agree to do a certain "favor" for him.

A Daedric race of humanoid warriors that are native to the Deadlands. They serve as the enforcers of Mehrunes Dagon during the Oblivion Crisis.

Citizens of the Imperial City

A Imperial Guard Captain who is extorting citizens and merchants in the city.

A Imperial Guard Captain who has dedicated his life to hunting down and destroying the Thieves Guild.

Skingrad in General
An affluent city located southwest of the Imperial City. It is well known for its vineyards.
Count Janus Hassildor

The Count of Skingrad. He is rarely seen in public, but is known by reputation to be a powerful wizard. 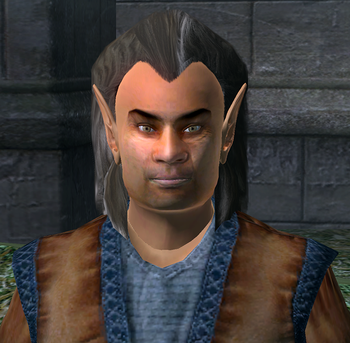 An odd Wood Elf who is widely regarded and tolerated as the 'town eccentric', who makes a point of approaching the Hero of Kvatch upon their first visit to the city. He is, in truth, a very disturbed man, and is convinced that everyone is out to get him - to the point of hiring you to follow (and possibly kill) those he suspects are guilty.

Bruma is the northern-most city of Cyrodiil. Its architecture has a distinct Nord influence, resembling towns from the northern province of Skyrim.

The Countess of Bruma. A collector of Akaviri artifacts, Narina will proposition the player for help in locating more for her collection.

A riverside town located to the south of the Imperial City. It lies along the northern border of Elswyr and is an important stopping point for the Mage's Guild questline.

The Count of Bravil. A former champion of the Imperial Arena, he grew up to be a drunkard and general ne'er-do-well. He and his city are looked down upon by the other counts.

Leyawiin in General
A south-eastern city in Cyrodiil nestled between the borders of Elsweyr and the Black Marsh, which give it significant Khajiit and Argonian populations.
Countess Alessia Caro

The Countess of Leyawiin, recently married to Count Marius Caro. She is the daughter of Countess Ariana Valga of Chorrol and detests Argonians, Khajiit and Dark Elves.

The Count of Leyawiin and husband of Alessia Caro. He's the one that you receive quests from.

Anvil in General
A seaside town located in the far southwestern corner of Cyrodiil. It boasts an impressive port and is one of the main hubs for the Fighter's Guild.
Countess Millona Umbranox

The Countess of Anvil, whose husband, Corvus, vanished mysteriously ten years ago, leaving her in control of his lands.

A north-eastern city in Cyrodiil located at the foot of the Jerall Mountains. Cheydinhal is the embark point for many players scouring the north-east and far eastern portions of the map.

The Count of Cheydinhal and the only non-Imperial among them. His son is something of a Miles Gloriosus who tries to close an Oblivion Gate and goes missing. He's also rumored to have had his wife killed twenty years ago.

Son of Andel and the leader of the Knights of the Thorne. The Hero of Kvatch has to rescue him and his companions from an Oblivion Gate that opens up outside the city.

A north-western city in Cyrodiil located between the Great Forest of west Cyrodiil and the Colovian Highlands of the Hammerfell border. Its proximity with the Weynon Priory makes it the second most likely city to be visited by a player sticking to the Main Quest, right after the Imperial City itself.

The recently-widowed Countess of Chorrol.

An impressive city in the hinterland of the Gold Coast of Cyrodiil, located between Anvil and Skingrad. It is built atop a large bluff, raising the city above the surrounding forests.

The ruling Count of Kvatch. He gets trapped within his own castle during the Daedra attack, and rescuing him will be necessary if you want Kvatch to help you fight the Daedra when they later attack Bruma.

A fellow guild member who often refuses contracts, due to their danger and low pay.

The Guildmaster of the Fighters Guild.

The Archmage of the Mages Guild and responsible for the banning of Necromancy.

Altermir head of the Anvil Chapter of the Mages Guild. Proud to proclaim she worked under now Arch Mage Hannibal Traven before he was called off to the Mages Council and eventually became Arch Mage.
Jeanne Frasoric

The rather inept head of Bruma's Mages Guild. Often the victim of pranks set up by the other guild members.

A Bosmer mage formerly a Guild leader, encouraged into retirement in Leyawiin after she started to show signs of senility. Master Mysticism Trainer.

The Argonian head of Bravil Mages Guild. She has been trying to deal with the fall out of a Stalker with a Crush towards one of her apprentices... which she would tend to herself if not for an entirely separate situation regarding her missing friend.

The Head of the Chorrol Guild Hall, an Argonian specializing in Conjuration. A stringent enforcer of rules and protcol. His former student Earana has found an exceedingly powerful spell and won't leave until he helps her recover it.
Adrienne Berene

Breton leader of the Skingrad Guild Hall. Her apprentice Erthor is missing, something she feels like she is probably obligated to care about.
Falcar

The Altmer head of the Cheydinhal Mages Guild Hall, which specializes in Alteration. Snide and hard to please.
Raminus Polus

An Imperial Master Wizard at the Arcane University in the Imperial City. He handles much of the Guagailild's administrative issues.

Villain from The Elder Scrolls II: Daggerfall, returning as the Big Bad of the Mages Guild questline

A Imperial Master Wizard on the Council of Mages. He is a researcher specializing in Ayleid history and authored the book "Magic from the Sky".

An Altmer Wizard on the Council of Mages. 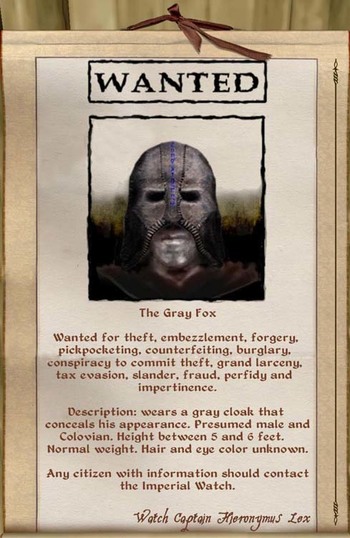 The mysterious head of the Thieves Guild. 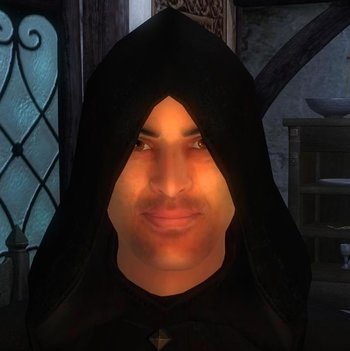 Speaker for the Dark Brotherhood.

Have you heard the tale of Mathieu Bellamont and the great treachery of Cheydinhal? Kill a boy's mother, and vengeance festers in the son...
The Spectral Assassin Lucien Lachance, Skyrim
Voiced by: Ralph Cosham (English)note Other Languages:Pavel Kipnis (Russian)

The Black Hand
The Doomed Guests of Summitmist Manor

Five people from across Tamriel who were invited to Summitmist Manor in Skingrad to search for a treasure hidden somewhere in the vast house as part of the quest "Whodunit?". Of course, there is no treasure; all of them have a Dark Brotherhood contract on their heads and the treasure hunt is a ruse that allows them all to be disposed of conveniently in one place. You must infiltrate the manor posing as another treasure hunter and discreetly murder them all without attracting their suspicions by gaining their trust and manipulating them against each other.

An Imperial Noble who is a guest at Summitmist Manor.

A Dark Elf Commoner who is a guest at Summitmist Manor.

A Breton Noble (or at least she claims to be) who is a guest at Summitmist Manor.

A Nord Barbarian who is a guest at Summitmist Manor.

An Redguard Knight and retired member of the Imperial Legion who is a guest at Summitmist Manor. 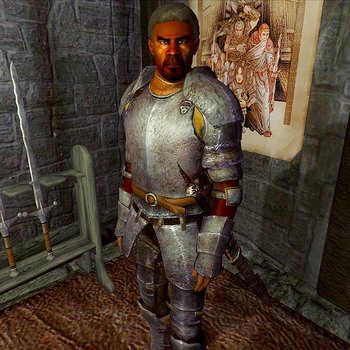 The Arena's Redguard Blademaster, who sorts out matches and new competitors.

The Champion of the Arena, rumored to be a "Half-Orc".

The sub-champion of the arena and likely leader of said team. 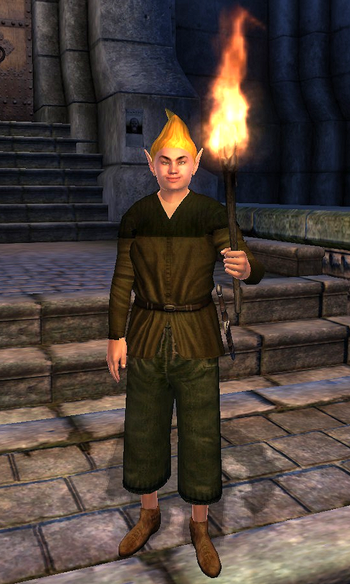 A small wood elf fan the player gains after becoming the Grand Champion of the Arena, who can follow you around and worship you.

A boar that lives in a cage in the Bloodworks. Owyn releases him into the arena to help you win the Blue Team Championship match. 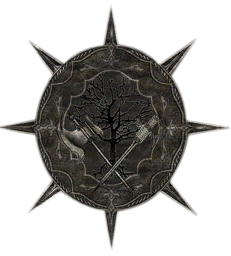 A mercenary company that is making competition for the Fighters Guild.

Knights of the White Stallion
Order of the Virtuous Blood

An order of Vampire Hunters set up in the Imperial city. When completing their quest, they can be a large source of gold for the player.

A Khajiit monk who runs around Cyrodill. When spoken to, he voices the opinion of the creators towards the Unpleasable Fanbase. Mostly in a very cryptic way of talking.

For more information on M'aiq outside of the context of Oblivion itself, see his entry on the Elder Scrolls Recurring Characters page.

A rude Dunmer prisoner who occupies the cell opposite yours at the start of the game. Despite only appearing once (or twice, if you join the Dark Brotherhood), he sticks in many players' minds, if anything because he spends his meagre amount of screen-time slinging racist and sexist slurs at you. 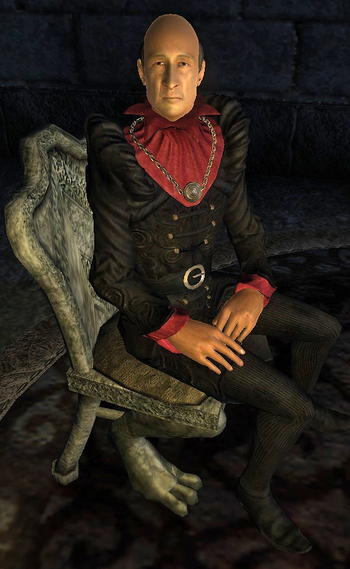 Dyus of Mytheria
Jygglag's former chamberlain, Dyus sits behind an impenetrable wall in Knifepoint Hollow, and is all that remains of the great Library of Jygglag after Sheogorath burned it.
Forces of Order
Jyggalag is assisted by the Knights of Order, who look like faceless crystal humanoids, and the Priests of Order, who are regular humanoids wearing crystalline robes and masks.
Relmyna Varenim

A Dunmer, “Flesh Mage”, initially encountered in Passwall, visiting from Xaselm. She is the “mother” of the Gatekeeper - which guards the entrance to the Shivering Isles, proper.

A Dark Seducer that is found patrolling Lady Syl's court in New Sheoth. She's later revealed to be The Mole and is involved in a conspiracy to assassinate Syl.

Duke Thadon of Mania
The Duke of Mania and a well known user of mind-altering substances, Thadon is a Bosmer bon vivant.
Duchess Syl of Dementia
The Duchess of Dementia, Syl is a paranoid Bosmer who believes everyone is out to get her.

Knights of the Nine characters

A hero from the early First Era who helped the Nedes rebel against Ayleid tyranny.

Knights of the Nine