This is a page for listing tropes related to the various recurring characters of the The Elder Scrolls.

For other characters, see The Elder Scrolls Series Character Index.

Note: Elder Scrolls lore is generally not clear-cut. Reasons for this range from biased in-universe sources intentionally only giving you only one side of a story, to sources lacking critical information or working from false information, to the implication that All Myths Are True, despite the contradictions, or that at least all myths are Metaphorically True. Out-of-game developer supplemental texts (frequently referred to as "Obscure Texts" by the lore community) are more trustworthy, but are frequently left unofficial and sometimes later contradicted. Because of this, it is entirely possible for two contradictory statements in the below examples to both be true. (And due to frequent events in-universe that alter the timeline, both may literally be true in-universe.) 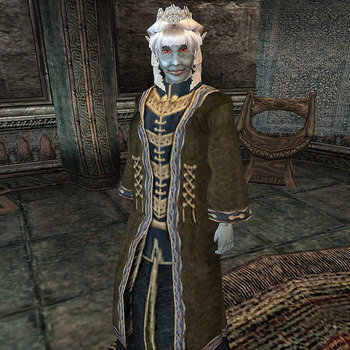 Barenziah, as seen in Tribunal
"She was a Dark Elf, and she had all the time in the world. All the time. But no more love left to give, and no more hatred left to burn. She had nothing left, nothing but pain, and memories... and her children. She only wanted to raise her family, and provide them a good life, and be left to live out what remained of hers. She had no doubt it was going to be a long life yet. And during it she wanted peace, and quiet, and serenity, of her soul as well as of her heart."
— The Real Barenziah
Appearances: Daggerfall, Morrowind (Tribunal), Oblivion (mentioned), Skyrim (mentioned, perhaps posthumously)
Race: Dunmer
Born: ca. 2E 891-893 (Mournhold, Morrowind)
Died: ?? (She is spoken about in the past tense in Skyrim, 4E 201)

The former Queen of Morrowind and Wayrest, and later Queen Mother of Morrowind, Barenziah was one of the most influential figures of the 3rd Era. Seemingly involved in some way with nearly every major event of the Era, she was considered a loyal vassal of the Third Empire of Tamriel. Her children and grandchildren would go on to impact Tamriel well into the 4th Era.

and The Real Barenziah 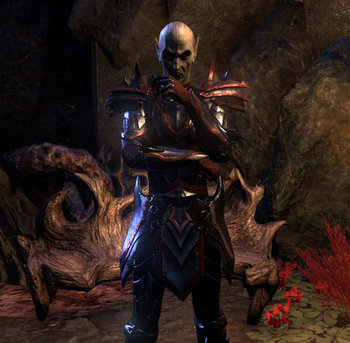 Divayth Fyr, as seen in Online
Appearances: Morrowind, Online
Race: Dunmer
Born: ?? (Stated to be over 4000 years old during the events of Morrowind)
Died: ??

Divayth Fyr is an ancient, reclusive, and very powerful Dunmeri wizard who has spent time as both a councilor of Great House Telvanni and as a member of Psijic Order. He is also a known associate of the Tribunal deity Sotha Sil. According to one of his daughters, Fyr is one of the oldest non-divine beings in Tamriel, being over 4000 years old. Fyr aided in stopping the Daedric invasion of Sotha Sil's Clockwork City around the time of the Planemeld and played an instrumental role in helping the Nerevarine to fulfill the Nerevarine Prophecy. His status is unknown following the events of the Red Year. 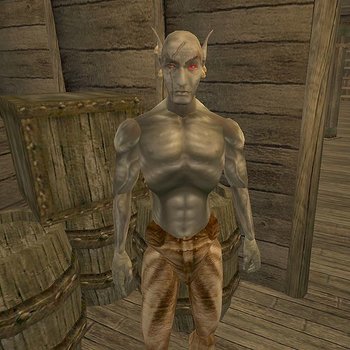 Jiub, as seen in Morrowind
"I am a hunter. I am a redeemer. I am Jiub."
— The Rise and Fall of Saint Jiub the Eradicator Hero of Morrowind and Savior of the Dunmer
Appearances: Morrowind, Oblivion (mentioned), Skyrim (Dawnguard, posthumously)
Race: Dunmer
Born: 3E ?? (Morrowind)
Died: 3E 433 (Kvatch, Cyrodiil)

A former freelance assassin and skooma addict who was aboard the same Imperial prison ship as the Nerevarine, Jiub would redeem himself by driving all of the Cliff Racers from Vvardenfell. After being canonized by the Tribunal Temple for his actions, he traveled to Kvatch in Cyrodiil where he was slain and soul-trapped during the Oblivion Crisis, leaving his soul forever trapped in the Soul Cairn. Centuries later, he would be aided by the Last Dragonborn in completing his autobiography.

The M'aiqs are a familial line of male Khajiit who have wandered the world since at least the 2nd Era, espousing comments and opinions regarding the developers, players, and the games themselves, often leaning on or outright breaking the "Fourth Wall". 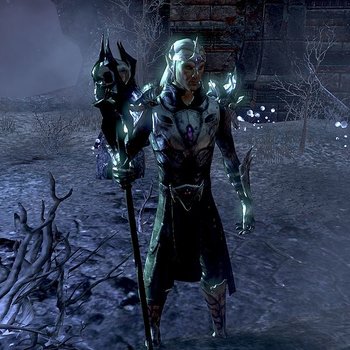 Mannimarco, as seen in Online
"The madder latter, Mannimarco, whirled in a deathly dance,
His soul in bones and worms, the way of the necromance.
Entrapping and enslaving souls, he cast a wicked spell."
— Mannimarco, King of Worms
Appearances: Daggerfall, Oblivion, Online
Race: Altmer/Lich (King of Worms), Aedra (God of Worms)
Born: Sometime prior to 1E 1200 (the beginning of the "Middle Dawn", which he is known to have experienced)
Died: 3E 433 (Cyrodiil, King of Worms), N/A (God of Worms)

Mannimarco was an Altmer necromancer of immense magical talent who would go on to become the first lich. He studied with the Psijic Order alongside Galerion, eventual founder of the Mages Guild, but was exiled by the Order for practicing the dark arts. He would gather followers and found the Order of the Black Worm, becoming known as the King of Worms. Due to the events of the Warp in the West, he apparently simultaneously ascended to divinity as the God of Worms while also remaining as the "mortal" King of Worms whose cult now worships the God of Worms. (Things get a little screwy when a Time Crash is involved.) The two seem to be treated as separate entities, and the "mortal" version of Mannimarco was killed by the Champion of Cyrodiil around the time of the Oblivion Crisis. 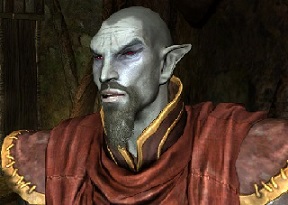 Neloth, as seen in Dragonborn
"I am likely the greatest wizard you will ever meet."
— Neloth's Dialogue in Dragonborn
Appearances: Morrowind, Skyrim (Dragonborn)
Race: Dunmer
Born: ??
Died: Still alive as of 4E 201 (Tel Mithryn, Solstheim)

Neloth is a Telvanni Mage-Lord and Councillor, who originally resided in Tel Naga in Sadrith Mora in Morrowind, who then grew Tel Mithryn on Solstheim prior to Dragonborn after Tel Naga withered following the eruption of Red Mountain. Also a legendary Enchanter, Neloth is quite possibly one of the most powerful wizards still alive in the 4th Era. 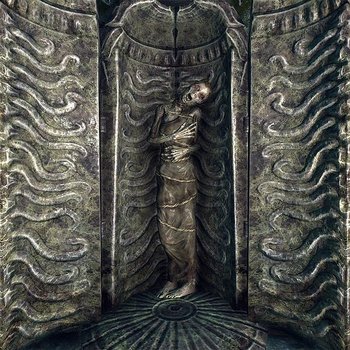 The Night Mother's Corpse, as seen in Skyrim
"Sweet Mother, sweet Mother, send your child unto me, for the sins of the unworthy must be baptized in blood and fear."
— The Black Sacrament
Appearances: Daggerfall, Morrowind (disputed, see below), Oblivion (posthumous), Skyrim (posthumous)
Race: ?? (Various disputed accounts claim Dunmer, Imperial, or even Khajiit)
Born: ?? (Sometime prior to 1E 2920)
Died: ?? (Sometime prior to 3E 433, likely much earlier) 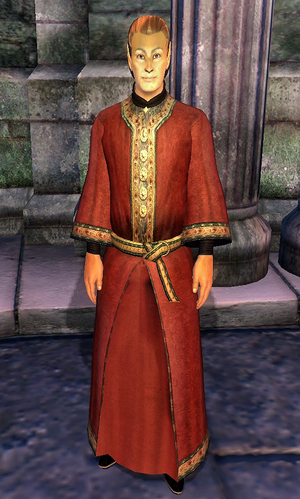 Ocato as seen in Oblivion
"It took almost a decade before my own machinations put me into contact with Ocato. He seemed more interested than most in what I had to say about the Thalmor, maybe because he was himself an Altmer and recognized the threat they represented. It wasn't long before the Thalmor had Ocato assassinated."
— Rising Threat, Vol. IV
Appearances: Daggerfall, Morrowind (mentioned), Oblivion, Skyrim (mentioned posthumously)
Race: Altmer
Born: ?? (He had "long held" a seat on the Imperial council as of his appointment to Imperial Battlemage in 3E 399)
Died: 4E 10

Ocato was the High Chancellor of the Elder Council and Imperial Battlemage under Emperor Uriel Septim VII. Following the deaths of Uriel VII and Martin Septim, Ocato was named Potentate (Regent) of the Empire in accordance with the Elder Council Charter. He served capably in that role until he was assassinated by the Thalmor in a successful attempt to destabilize the Empire early in the 4th Era. 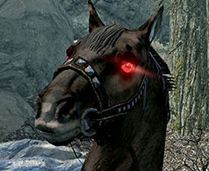 Shadowmere is a black, undead horse with glowing red eyes associated with the Dark Brotherhood. 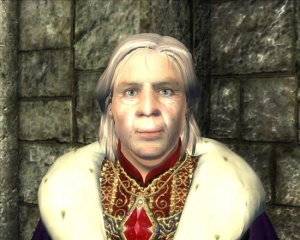 "In 3E 389 he was a young man, full of pride, energy, and ambition. During the Restoration, after his rescue and return to the throne, he was an old man, grave, patient, and cautious. He also became conservative and pessimistic, where the policies of his early life were markedly bold, even rash. Uriel accounts for this change as a reaction to and revulsion for the early teachings and counsel of Jagar Tharn. However, Uriel's exile in Oblivion also clearly drained and wasted him in body and spirit, though his mind retained the shrewd cunning and flexibility of his youth."
— A Short Life of Uriel Septim VII
Appearances: Arena, Daggerfall, Morrowind (mentioned), Oblivion
Race: Imperial
Born: 3E 346
Died: 3E 433 (Imperial City, Cyrodiil)

Uriel Septim VII was the 21st and finalnote Though proclaimed by High Chancellor Ocato, Martin was never officially crowned Emperor Emperor of the Septim Dynasty, ruling for an unheralded 65 years (second only to Tiber himself). He was notably the Emperor during each game from Arena to his death at the beginning of Oblivion.

Uriel is remembered as a benevolent ruler who brought order and justice to Tamriel, initially as an aggressive integrator and later as a shrewd diplomat and schemer. He fathered five sons - three legitimate heirs who were also assassinated by the Mythic Dawn, the bastard Calaxes (who was assassinated well before the Oblivion Crisis), and Martin, hero of the Oblivion Crisis.