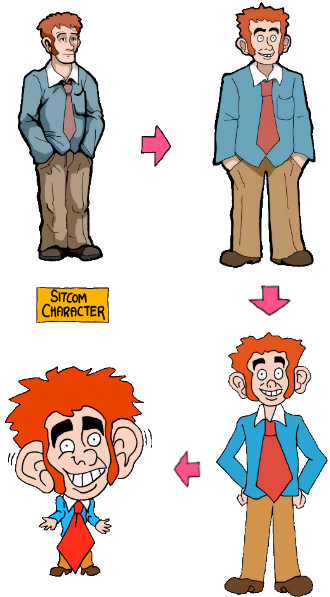 In general, comedies, especially sitcoms, fall into the trap of Flanderization because Character Development is far less important than Rule of Funny. Given a choice between getting a laugh or moving the story forward, the former will almost always take priority.

See also Never Live It Down (when the character is more associated with some action or event than the character actually changing), Unintentionally Sympathetic (when realistic quirks are mishandled by the writers) and Forgot Flanders Could Do That (when a story brings back pre-Flanderized aspects of the character as a reminder that those traits are there, even if you don't see them much any more). Compare Temporarily Exaggerated Trait, which is like flanderization but only done temporarily. Compare and contrast Early-Installment Weirdness (as it applies to characters), with early depictions of a character being different from later ones simply because the producers hadn't figured out what role they should play in the story.