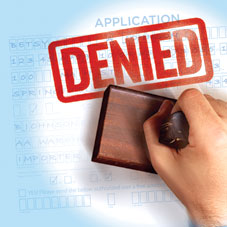 This guy is the ultimate pencil pusher from a government agency or corporation, and he creates the red tape that normal citizens hate, wielding the Stamp of Rejection like a weapon. He's an unlikeable Punch-Clock Villain with a bad temper and a sizable streak of callousness. Works for any and all bureaucracies, including Department of Child Disservices, banks and possibly even your own afterlife. His job, storywise, is to get in the way of whatever the heroes need to do, sometimes because what the heroes are doing is against some form of regulations, but other times because the character is a Jerkass who just doesn't like the heroes and is using "regulations" to make their lives difficult. In disaster movies and other works that lack a real villain (or whose villains are too cool to effectively hate), expect this guy to be the work's resident Hate Sink.

Sometimes he can be restored to humanity by uncovering the secret dream buried deep beneath his efficient exterior. Failing that, you may be able to use his respect for Exact Words against him.

On the other hand, sometimes he is obstructing a Matter of Life and Death. Threat of force, or actual force, may be needed to get by him, which could turn into a Kick the Son of a Bitch moment. A common cause of Divided We Fall. Many a surreptitious entry into, or exit from, a location, or requisition of supplies, is needed because it would take too long to get by him. Almost all this form-filling out serves no useful purpose; for the hero to put in a list that will allow him access to a facility, for instance, is a very rare subversion. Pournelle's Iron Law of Bureaucracy (see above) is always in effect.

Rarely, in a Matter of Life and Death, a benevolent Obstructive Bureaucrat will go and obstruct the villain. He may actively devise regulations to impede and hinder him, and then, with the same mindless fervor as any other bureaucrat, insist on their being followed to the letter.

The tropes: Beleaguered Bureaucrat, Department of Child Disservices, and Social Services Does Not Exist overlap since they all involve the same problems. The employees are often overworked, underpaid, lack resources, and suffer the public’s wrath. They then turn into the Obstructive Bureaucrat and use Bothering by the Book to slow down the workload or get revenge on the people who make unreasonable demands.

This trope also has a darker version, where the character is still a government employee concerned with the bottom line, but what he does in daily work probably violates the Geneva Convention. He is likely to be a murderer and/or a torturer who defends himself by saying "I'm just doing my job". In short, he is a Well-Intentioned Extremist whose overriding motivation is being Employee of the Month.

Note that this is not the same as the Knight Templar, another type of Well-Intentioned Extremist. The Knight Templar does horrible things for some greater good, whereas the Obstructive Bureaucrat has no concept of "greater good", and cares only about following procedure, or rather believes that procedure is equivalent to the "greater good". He's not just prone to Just Following Orders: as long as the orders match the rules he thinks it's his job to enforce and follow, Just Following Orders is what he is all about. In another sense, where the Knight Templar is the extreme leader, the Obstructive Bureaucrat is the extreme follower.

If he has no idea that the job he's doing is evil, he may be a Clueless Deputy. This sort of Obstructive Bureaucrat can be drawn into a Heel–Face Turn or Freak Out more readily than one who does know and just feels it's none of his business (a fella's gotta eat)...

In the US, this character can also be a member of Congress (usually a senator) who is investigating the heroes.

This type of character is also known as a "jobsworth" in British slang, named for their tendency to deny a perfectly reasonable request with "That's more than my job's worth."

This species might easily proliferate around a Vestigial Empire.

These characters tend towards Lawful Neutral, usually Lawful Stupid and sometimes Lawful Evil. Usually tends to be a subtrope of Villainy-Free Villain.

Examples of the humorous version

Examples of the dark version:

Nate Griffin manages to get one over on the white men by opening a DMV and forcing them to go on a long-winded slew of paperwork.

Nate Griffin manages to get one over on the white men by opening a DMV and forcing them to go on a long-winded slew of paperwork.