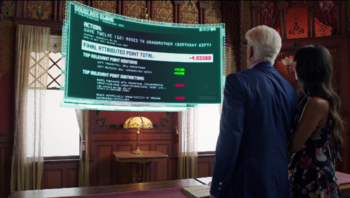 "The Bad Place isn't tampering with points. They don't have to."
"There are so many unintended consequences to well-intentioned actions. It feels like a game you can't win!"
— Tahani

The Soul Squad has entered the Good Place through their post office. To avoid arousing suspicion from the worker Gwendolyn, Michael poses as an accountant, has Janet disguise herself as a Neutral Janet, and claims the four humans have won a contest. Being rather gullible, Gwendolyn immediately believes it and tells Michael how he can contact The Committee to address the issue on his mind.

Eleanor is determined to get out of the post office, but humans can only get to the Good Place through the official gateway. Chidi gets her to calm down and suggests they just enjoy the moment. They go on their first official date, drinking, bonding and enjoying their time together.

Meanwhile, Jason and Tahani discuss what they found out in Janet's void. Jason's not sure how he feels about Janet, and Tahani pushes him to talk to her about it directly. That backfires, though, when Janet gets embarrassed and confused by all these emotions she's suddenly feeling and she is having a hard time keeping up her Neutral Janet facade, feeling stressed and emotionally on edge. Tahani tries to help by making a divorce "Death Did Us Part" certificate for herself and Jason but it only makes them both feel worse—Jason is reminded of the fact that he's dead and Janet is reminded of the fact that she essentially killed her friends.

Michael meets with The Committee, a group of kind, considerate, and polite angelic beings. He pleads his case to them, stating that he's certain the Bad Place has hacked the system somehow, hence why no human has gotten into the Good Place in 521 years. The angels are horrified and promise to take immediate action. However, immediate action for them would take centuries, if not millennia, just to form their investigative team. Michael reiterates the issue is extremely urgent and in that time, countless innocent humans are going to be undeservedly tortured. However, the angels state they absolutely will not break the rules and will follow them to the exact letter.

As Michael sulks in disappointment at yet another possible solution turning out to be a letdown, Tahani vents to him about how her genuine attempts to help Jason and Janet only makes everything worse for everyone. As she laments over the unintended consequences of her actions, a realization strikes Michael and he figures out what the problem with the points system is. Looking through the Book of Dougs, Michael sees that the points system also counts the positive and negative consequences of every action, and with the modern world being so interconnected, this means even the smallest and most well-meaning of actions can have multiple harmful and far-reaching ramifications causing harm to other people or benefiting a bad person in some way. The Bad Place never had to hack the system because the system itself was flawed to begin with.

Tahani apologizes to Janet and lets her know she just wants to help. Janet breaks down and tearfully hugs Tahani, admitting that she feels conflicted in her feelings for Jason, who starts crying to join in even though he has no idea what's going on. Gwendolyn sees the three of them crying and quickly becomes suspicious, which is worsened when Eleanor bursts out of a closet with Chidi to loudly and crudely announce they just had sex. Gwendolyn is hurt that they lied to her and tries to angrily shake her fist at Michael but can't make a fist, informing him that she will have to turn him over to the Judge. Michael replies that he already has contacted her. The Doorman then appears, telling the Soul Squad that they will be meeting with the Judge at the Interdimensional Hole of Pancakes.