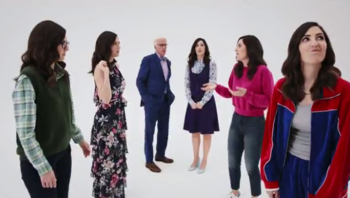 "There may have been some side effects for the humans."
"We're almost at the end, guys. Just stay here, and keep Janet's heads on straight."
— Michael

Janet has brought the Soul Squad to her void to escape the demons and the Judge. Now that they're dead again and not in either the Good or Bad Places, this makes them fugitives, so everyone in the afterlife will be after them. Since humans cannot survive in her realm, everyone's turned into Janets, and also share her powers. Eleanor tries to confront Chidi about what she's found out from Michael and begins having an identity crisis out of angst—Chidi loved her in another timeline but iterates that it isn't the Chidi he is now, using the philosophy of the self to prove his points, making her angry. Meanwhile, Tahani and Jason wander off and sift through Janet's memories, learning of the time Janet and Jason got married in the process.

While the void is falling into chaos, Michael and Janet visit the Accounting Department of the afterlife, who are responsible for admittance to the Good Place and Bad Place, including their Neutral Janet and the overworked Matt, to figure out what's wrong with the point system. The head accountant, Neil, cheerfully explains how the point system works and how it's protected from any sabotage. Out of curiosity, Michael asks how many points Doug Forcett has. Neil retrieves the Book of Dougs, a record of all Dougs throughout history, and pulls up the score. Neil's initially impressed by the numbers, but then notices Doug's age and confirms Shawn's assertion that he will also be going to the Bad Place. Michael is stunned and starts asking how many people have gotten into the Good Place recently. Neil's searching reveals that no human has gotten into the Good Place in 521 years.

Michael is horrified and outraged at this discovery, and is especially livid that no one seems to have noticed or even cares, as Neil still refuses to believe that something is wrong with the system. As Michael laments over these revelations, Janet gives words of encouragement and tells him that he must be the one to change the system if no one else is willing. She is also slowly falling apart, as Eleanor's increasing psychological breakdown is destabilizing her void and will kill the humans and Janet herself unless she calms down. Before Michael marbelizes Janet, however, Chidi finally gets through to Eleanor with a motivational speech and kisses her. The humans turn back into themselves, but can't stay in Janet's void anymore and are ejected, landing in the middle of the accountants' office, which trips the alarm. Michael, with a renewed resolve, tells Neil off and steals the Book of Dougs, and the group escapes through a pneumatic tube that takes them to the real Good Place.