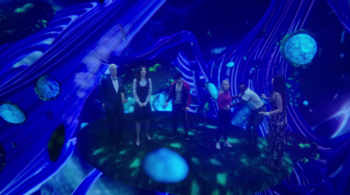 "This is the Interdimensional Hole of Pancakes."
"My guess is they will do what the original four did. Seek help, support each other, make wise decisions, improve. If they do, then it's proof that humans are not "bad, full stop, end of story"."
— Michael

The Soul Squad goes to meet Gen in the Interdimensional Hole of Pancakes, a place full of portals outside of all dimensions, and while she's not happy with how Michael's ignored her orders before, she's willing to hear him out and discuss the issues with the points system Michael has discovered. He argues that humans think they're making one choice when they're really making several that they don't even know they're making and due to how interconnected and complicated the modern world is, these unintended consequences have wide-ranging negative effects dragging people's scores down, hence why no human has been able to get into the Good Place for over five centuries. Gen is initially unmoved, arguing that it's the individual's fault for not considering the consequences of their actions before proceeding with them and Michael's argument that "life is complicated" is a poor excuse for not taking responsibility. Chidi tries to argue her point with a Sartre quote, only for Jason to interrupt him with a story about a teammate from his dance crew named Big Noodle who was always late to practice sessions due to being busy working three jobs to support his family, making the point that Big Noodle wouldn't have the time to consider the consequences of all of his actions and moreover, Gen doesn't understand what it's like to be a human. She accepts the Soul Squad's challenge to go to Earth and see what life there is like for herself, returning a moment later after having spent several years there. She's deeply shaken by her experience and appalled at how much of a mess the world is, agreeing with Michael that life on Earth is too difficult and complex for any human to be able to live the kind of moral life necessary to earn a spot in the Good Place; even with all her infinite knowledge, Gen couldn't make the right decisions no matter how much she tried to. Chidi himself adds that he tried to weigh in the consequences of every choice he made and even that had negative consequences, as it led to him becoming so indecisive that it made his friends and family miserable, hence why he got sent to the Bad Place.

Gen agrees they need to fix this and summons Shawn to discuss the matter. Shawn argues that humans are intrinsically bad, but Eleanor figures she and the other humans were able to improve upon themselves in Michael's original neighborhood because the afterlife removed all the complications and pressures of modern life that would've otherwise hindered their progress. Shawn dismisses it as a fluke, so Chidi suggests they repeat this as an experiment: allow Michael to recreate the fake Good Place neighborhood where the things that make life on Earth so difficult and complicated are gone, bring in four newly-deceased humans as test subjects, and see if they can be stimulated to improve themselves, as the original four were. With some grumbling, Shawn and Gen accept this.

This Neighborhood can't be built in the Good Place or the Bad Place and neither side wants the fake residents to be portrayed by the demons or angels, so Eleanor proposes they build it in the Medium Place and have Janet create the fake residents. Gen lays down the rules: the Bad Place will pick the four human test subjects and their general level of immorality must be on the same level as the original four (so no dictators or serial killers), and while Michael will not get the files on them in advance, he is allowed to modify the neighborhood as he sees fit upon their arrival. Both Michael and Shawn have objections to this, to which Gen says that makes this a fair compromise. She declares the experiment will go for the equivalent of one Earth year, and she'll be watching.

As the humans visit Mindy to let her know of the experiment that will be going on in her backyard, they also encounter Derek, and he's a lot more intelligent and capable than he used to be. As he became part of the Medium Place, a switch came about that Mindy can push to shut him down and then reboot him, and like Janet, the reboots give him upgrades. Mindy has pushed the switch thousands of times out of boredom and shutting Derek down whenever he annoyed her provided her with some amusement. As Janet starts to create the fake residents, Derek offers to help her to ease the load. Jason is not thrilled by Derek's intrusion, but he goes along with it.

Just as Michael is about to welcome the first human for the experiment, Shawn contacts him and gloats about how he plans to torture the humans should the experiment fail, causing Michael to break down and panic.