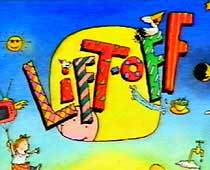 OK, let's face it: there is little quality entertainment for preteens. Most of what the preteens get is geared towards scatological humour and general insanity, making the few shows that aren't such something truly special.

Lift-Off is one of those truly special shows. Created in Australia in the 1990s, it was envisioned as a way to bring quality entertainment to children thanks to the Australian Children's Television Foundation (the group that gave us Round the Twist, Kaboodle and Ocean Girl). It ran for three separate series in 1992, 1994 and 1996.

In a unique move for a TV show, each episode was formatted to run either as an hour-long block or as two half-hour episodes (each self-contained, bridged only by a song). The series focused on a bunch of kids living in a low-rise apartment block that was staffed by an eccentric Sadist Teacher-type administrator and a talking lift named Lotis. Other characters that would make appearances were EC, a faceless ragdoll that was capable of limited independent movement, and Beverly, a one-eyed pot-plant that would pop up just about anywhere.

Each episode would feature the kids dealing with an everyday problem, ranging from dealing with their friends' carelessness to learning An Aesop about teamwork. Once per Episode, we would get each of the following:

There was also a Game Show Spin-Off, EC Plays Lift-Off, hosted by Mark Mitchell in his character of Seymour Fish.